The Easiest Way To Change The World? #HourOfSpiritualUnity 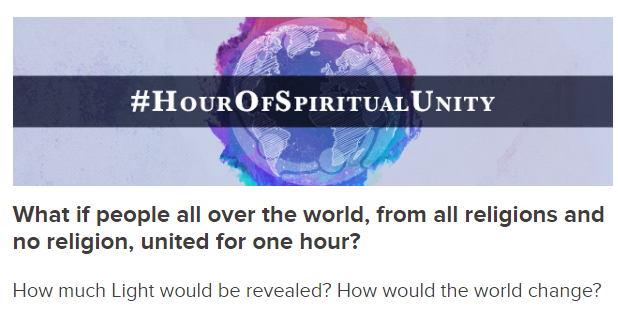 In 1993, a study was conducted in Washington, D.C. to demonstrate the effectiveness of meditation in lowering crime rates. A group of meditation students would meditate to lower the crime rate in the city.

Skeptics, including the D.C. Chief of Police, claimed the meditation would have no effect.

So what happened? In a two month period between June 7 and July 30, the crime rate dropped up to 23.3%

The statistical probability of this occurrence was less than two in a billion.

With 800 – 4,000 people focused on meditating for peace, a major city was dramatically affected by the energy.

With this in mind, major world spiritual leaders are calling for an hour of spiritual unity today.

Karen Berg, spiritual leader of the Kabbalah Centre, said in a statement,

“It has been my dream that one day, barriers will be removed between people, and that we will find respect for each other’s spiritual practices and beliefs. For holy books from different traditions may contain different words but the message remains the same: To love each other, to love ourselves, and to grow our love and awe for the Infinite Force that is all around us and gives us life. Indeed, unity can be the foundation of our differences.

With this in mind, I extend this personal invitation to join me for An Hour of Spiritual Unity, wherein we will all come together to read from any holy scripture that speaks to our hearts — be it the Zohar, the Old Testament, the New Testament, the Quran, the Yogi Sutras, the Bhagavad-Gita, the Pali Canon, even poetry if you would like. Those who prefer not to read can do meditation, contemplation, yoga… anything that personally awakens your spirit. The hour can be of your choosing, any time during the evening of March 27th. It can be as you get home from work or perhaps just before you go to sleep.”

Berg is joined in her call for peace by spiritual leaders from around the world, including Sheikh Dr. Muhammed Al-Hussaini, Dr. Bawa Jain, Secretary-General of The Millennium World Peace Summit of Religious and Spiritual Leaders, and Ilchi Lee, founder of Brain & Body Yoga.

“What we see now more than ever before is this idea of Earth consciousness that motivates us to do something positive for the sake of global good,” said Lee. “Ultimately what will save this world is not one person, one religion, one nation, or one race of people. It’s all of us living as united Citizens of the Earth as we individually brighten our own consciousness and play our roles with this spirit of global consciousness in mind.”

With all the chaos of bombings and terrorist attacks that pervaded last week and last year, now is the perfect time for people across the globe to unite, and use our energy to make a dramatic impact for good.

Let our brainwaves generate peace around the world, and positively influence all mankind.