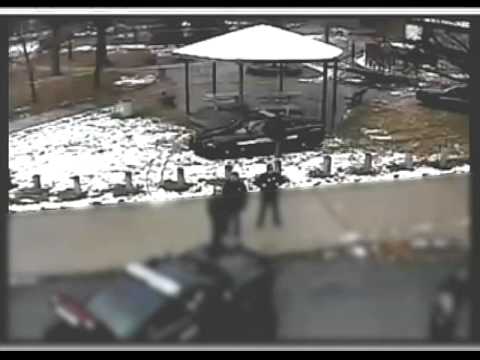 Additional surveillance footage, revealing what occurred shortly after Tamir Rice was shot and killed by Cleveland Police officer Tim Loehmann, showed that Rice’s 14-year-old sister was thrown to the ground and handcuffed as she was rushing to her brother before being placed into a cruiser, and that several minutes passed before Tamir Rice received first aid.

Rice’s sister was forced onto the ground by Loehmann’s partner, Officer Frank Garmback. Cleveland.com reported that the girl was placed in the police cruiser less than ten feet away from her injured brother, and the officers stood idly before a man identifying himself as an FBI agent administered first aid to Tamir. “No one thinks that it’s appropriate to try to save him,” Walter Madison, an attorney representing the Rice family, said of the officers’ behavior. “The first person who does is not affiliated with the Cleveland police department.”

Madison described the video as “shocking and outrageous” and said “This has to be the cruelest thing I’ve ever seen.”

“This is the level of service that makes people very upset and distrustful of law enforcement,” said Madison.

The two officers involved in the killing of Tamir Rice have each been involved in prior incidents that may raise additional questions as the investigation of Tamir Rice’s death continues. Officer Loehmann was hired by the Cleveland Police Department after he had resigned ahead of termination by his previous employer, the Independence Police Department, for various documented emotional problems and an inability to properly fire weapons.

Officer Garmback was named in a 2012 lawsuit filed by Tamela Eaton, who alleged Garmback had “placed her in a chokehold, tackled her to the ground, twisted her wrist and began hitting her body” as another officer allegedly punched her in the face following a disagreement in 2010. County prosecutors accused Eaton of interfering with an investigation and punching Garmback  in the mouth; Eaton was acquitted in a jury trial and received a $100,000 settlement from the city of Cleveland.

Mayor Jackson said last week that the investigation into the death of Tamir Rice was being handed over to the Cuyahoga County Sheriff’s Department.