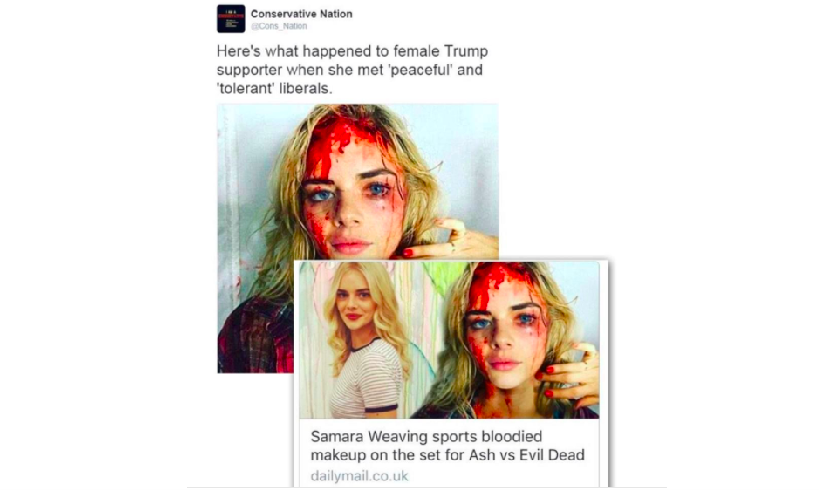 A viral image showing a woman who was allegedly beat up by a Trump supporter has been proven to be fake, after the image was traced to a photo of a woman on the set of a television show.

The photo is actually from a show called “Ash Vs Evil Dead,” a horror-comedy show, and it features actress Samara Weaving sporting bloodied makeup.

This is not the first time that the photo was circulated, and none the less by the same outlet and twitter account: Conservative Nation.

During the primary election in June, the account tweeted out the same photo of Weaving. At this point, the question must be asked—are they doing this on accident, or are they doing it as a form of clickbait propaganda?

A Twitter user @karmasense joked, “this chick was at bowling green massacre with me when I died.”

this chick was at bowling green massacre with me when I died .

The comment refers to another fake news story created White House Counselor Kellyanne Conway, who now claims that she misspoke, and referenced a false account.

The Bowling Green Massacre never happened. You can read more about the actual real factual story of the arrest that took place in Bowling Green below:

Both sides of the political spectrum have faked violence in many cases. Now it appears to be the alternative media that is willfully joining in on this spectacle and creating sensational stories that never happened.

For example, a man whose mother died days before President Trump enacted a travel ban on seven countries, claimed that his mom died because the ban prevented her from traveling to the United States.

The job of propaganda used to be the CIA’s, as ex-CIA Director William Colby and Senator Frank Church revealed during the 1975 Church Hearing when they blew the whistle on Operation Mockingbird. This program was designed to disseminate propaganda to the public through journalists controlled by the CIA.

Former President George W. Bush revealed in 2001 that the world press packaged videos sent to the media to air.

In the two weeks since Trump has taken office, there has been a plethora of inaccurate reporting where errors galore surround stories about the new administration and its actions.

With the bombardment of disinformation, it is more important now than ever before to be vigilant, and to take the time to research.

What are some cases of disinformation you have seen in the media recently that you think should be covered? Let us know in the comments!