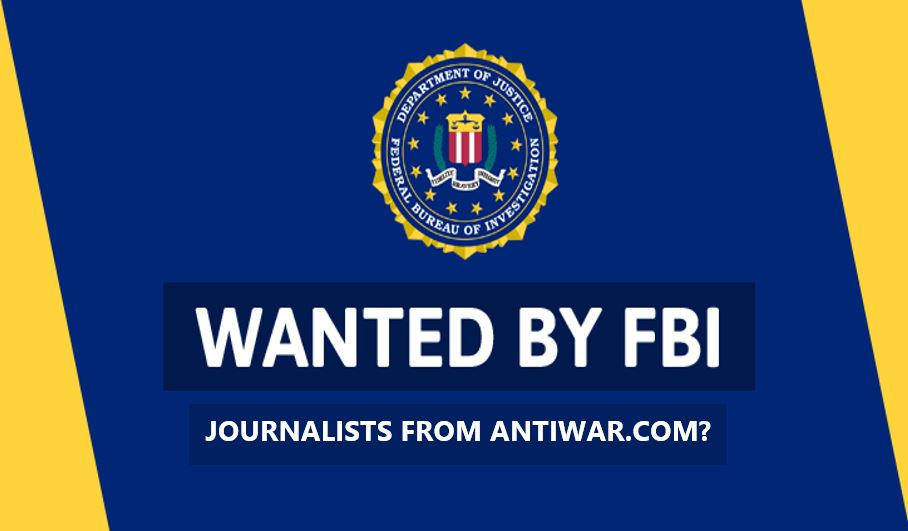 Journalists from Anti War Eric Garris and Dennis Raimondo sued the FBI in 2013, after they realized that their work was being monitored by government agents. According to a report from Courthouse News Service, the two journalists are set to be paid $299,000 from the FBI pocketbook to settle legal fees.

Garris and Raimondo would have perhaps not known they were being monitored if they didn’t notice their names on a Freedom of Information Act (FOIA) request available online. In this document, they realized that the FBI conducted a threat assessment in 2004, regarding whether or not Antiwar.com and their work could “constitute a threat to national security on behalf of a foreign power.”

In other words, the FBI thought that these two humble journalists could be fighting against the U.S. Constitution as part of an international espionage scandal. Thanks to the help from Julia Mass, an attorney from the American Civil Liberties Union (ACLU) branch based in northern California, these two journalists received legal help.

With attorney Julia Mass by their side, the two Anti War journalists were finally able to begin utilising a legal means to protect themselves and their company from FBI monitoring. The two filed a FOIA request to have all of the FBI files regarding them released. According to a statement gathered by Courthouse News, she said that:

“It’s unfortunate that we had to litigate so extensively in order to get the documents, and the documents themselves reveal a very troubling focus on our clients’ political speech.”

Mass had previously said that she believes “government surveillance of news organisations interferes with journalists’ ability to do their jobs” and that “freedom of the press is a cornerstone of our democracy, whether it’s the Associated Press or Antiwar.com.”

When the journalists realised that they were being monitored by government agents, they quickly jumped to their online platform to try and get this information out in the open. Sadly for them, this caused some of their heavy donors to stop donating, in fear that they would also become monitored by the FBI. The two said that they lost $75,000 a year since 2011 as a result.

In essence then, FBI monitoring effectively caused the two journalists and their online platform to fall back into a financial crisis. When income starts coming in, it can be devastating to watch it immediately disappear. Recently, something similar happened to We Are Change when YouTube and affiliates pulled monetization from several We Are Change video reports and made the WAC YouTube channel restricted.

[Related: How To Not Be Restricted, Censored Or Demonetized On Youtube]

After filing an FOIA request to the FBI, the Anti War reporters were refused access to the files which discussed them and their media outlet. As a result, a lawsuit emerged which would last several years before the two reporters were able to see a legal remedy.

Now, the FBI has agreed to provide all of the records they have on Antiwar, as described in the two stipulations filed in the San Francisco federal court, These stipulations are both available online, one available here, and the other here.

Attorney Julia Mass says that “we certainly expect it was everything they had… [but] because that information is in the hands of the FBI, we can never know for certain” when describing whether or not they received all of the FBI files on the two reporters.

The two reporters are now pending two other claims against the FBI in court after dropping their FOIA claims. One claim they are still seeking the remedy for is the alleged inaccurate records on Eric Garris. According to a separate report from Courthouse News, Garris was marked by an FBI file as being a potential cyber terrorist, threatening to hack the FBI website. Garris had reportedly contacted the FBI for help regarding an email he received that was a threat to hack Antiwar.com.

The FBI tried to correct this error in 2014 by creating a corrective action file. Legal consultants for the Anti War reporter have argued that the inaccurate file should be expunged or altered to make it no question that the reporter never threatened the FBI.

Anti War started in 1995 in an effort to oppose U.S. Balkan military campaign during the Clinton presidency. The website’s mission statement says it is “devoted to the cause of non-interventionism and is read by libertarians, pacifists, leftists, “greens,” and independents alike, as well as many on the Right who agree with our opposition to imperialism.”

Anti War is perpetually posted here on We Are Change, and any in the field of independent journalism should see this news as one that rings the bells of liberty and privacy.