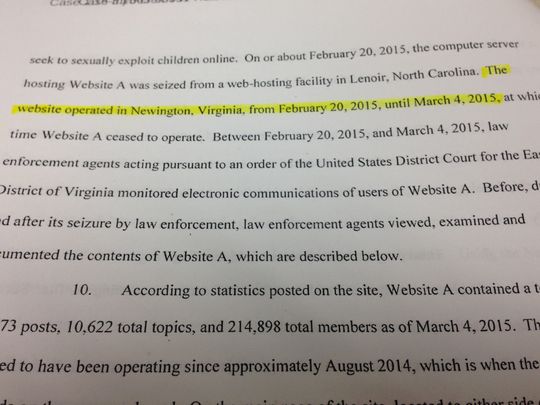 WASHINGTON — For nearly two weeks last year, the FBI operated what it described as one of the Internet’s largest child pornography websites, allowing users to download thousands of illicit images and videos from a government site in the Washington suburbs.

The operation — whose details remain largely secret — was at least the third time in recent years that FBI agents took control of a child pornography site but left it online in an attempt to catch users who officials said would otherwise remain hidden behind an encrypted and anonymous computer network. In each case, the FBI infected the sites with software that punctured that security, allowing agents to identify hundreds of users.

The Justice Department acknowledged in court filings that the FBI operated the site, known as Playpen, from Feb. 20 to March 4, 2015. At the time, the site had more than 215,000 registered users and included links to more than 23,000 sexually explicit images and videos of children, including more than 9,000 files that users could download directly from the FBI. Some of the images described in court filings involved children barely old enough for kindergarten.

Officials acknowledged those risks, but said they had no other way to identify the people accessing the sites.

Ron Hosko, assistant director of the FBI’s Criminal
Ron Hosko, assistant director of the FBI’s Criminal Investigative Division. (Photo: Evan Vucci, AP)
Lawyers for child pornography victims expressed surprise that the FBI would agree to such tactics – in part because agents had rejected them in the past – but nonetheless said they approved. “These are places where people know exactly what they’re getting when they arrive,” said James Marsh, who represents some of the children depicted in some of the most widely-circulated images. “It’s not like they’re blasting it out to the world.”

The FBI hacks have drawn repeated – though so far unsuccessful – legal challenges, largely centered on the search warrants agents obtained before agents cracked the computer network.

But they have also prompted a backlash of a different kind. In a court filing, a lawyer for one of the men arrested after the FBI sting charged that “what the government did in this case is comparable to flooding a neighborhood with heroin in the hope of snatching an assortment of low-level drug users.” The defense lawyer, Colin Fieman, asked a federal judge to throw out child pornography charges against his client, former middle school teacher Jay Michaud. A federal judge is scheduled to hear arguments on that request Friday.

Federal agents first noticed Playpen not long after it went online in August, 2014. The site was buried in what is often called the “dark web,” a part of the internet that is accessible to the public only through Tor, network software that bounces users’ internet traffic from one computer to another to make it largely untraceable.

By March of last year, the FBI said, Playpen had grown to become “the largest remaining known child pornography hidden service in the world,” the Justice Department said in a court filing. FBI agents tracked the site to computer servers in North Carolina, and in February seized the site and quietly moved it to its own facility in Newington, Va.

The FBI kept Playpen online for 13 days. During that time, federal prosecutors told defense lawyers that the site included more than 23,000 sexually explicit images and videos of children. Some of those could be downloaded directly from the government’s computers; others were available through links to other hard-to-find locations on the web, Fieman said.

One section of the site was labeled “toddlers,” according to court records. And prosecutors said that some of the images users accessed during the time Playpen was under the government’s control included “prepubescent female” having sexual intercourse with adults.

Fieman said more than 100,000 Playpen registered users visited the site while it was under the FBI’s control. The Justice Department said in court filings that agents had found “true” computer addresses for more than 1,300 of them, and has told defense lawyers that 137 have been charged with a crime, though it has so far declined to publicly identify those cases.

Law enforcement has long complained that online services like Tor create a type of safe haven for criminals because they hide the unique network addresses from which people connect to sites on the internet. Officials said the only way for the government to crack that network was to take over the site and infect it with malware that would trick users’ web browsers into revealing their real internet addresses, which agents could then trace back to the people who were using them.

“The government always considers seizing an illegal child pornography site and removing it from existence immediately and permanently,” Justice Department spokesman Peter Carr said. “While doing so would end the trafficking of child pornography taking place on that one website, it would do nothing to prevent those same users from disseminating child pornography through other means.”

Still, he said, “The decision whether to simply shut down a website or to allow it to continue operating for a brief period for a law enforcement purpose is a difficult one.”

Justice officials said they were unable to discuss details of the investigation because much of it remains under seal, at their request.

The Justice Department said in court filings that agents did not post any child pornography to the site themselves. But it did not dispute that the agents allowed images that were already on the site to remain there, and that it did not block the site’s users from uploading new ones while it was under the government’s control. And the FBI has not said it had any ability to prevent users from circulating the material they downloaded onto other sites.

“At some point, the government investigation becomes indistinguishable from the crime, and we should ask whether that’s OK,” said Elizabeth Joh, a University of California Davis law professor who has studied undercover investigations. “What’s crazy about it is who’s making the cost/benefit analysis on this? Who decides that this is the best method of identifying these people?”

The FBI was first known to have operated a child porn site in 2012, when agents seized control of three sites from their operator in Nebraska. FBI Special Agent Jeff Tarpinian testified that the government “relocated two servers to an FBI facility here in Omaha and we continued to let those child pornography run – websites operate for a short period of time.”
That case led to federal child pornography charges against at least 25 people. But in an illustration of how difficult the cases can be, at least nine of the people charged in those cases are still identified in court records only as “John Doe,” suggesting the FBI has so far been unable to link specific people to the network addresses it logged.

The next year, the FBI took control of a dark web site known as Freedom Hosting. The man prosecutors have accused of operating that site, Eric Marques, is due to be extradited to the United States; the charges against him remain sealed. The FBI revealed its role in an Irish court hearing covered by local media.

In each case, the FBI injected the site with malware to crack Tor’s anonymity.

Those hacks, developed with the help of outside contractors, were a technical milestone. When the FBI first realized it could break through Tor, Hosko said the agency gathered counterterrorism investigators and intelligence agencies to see if any of them had a more pressing need for the software. “It was this, exponentially,” Hosko said.