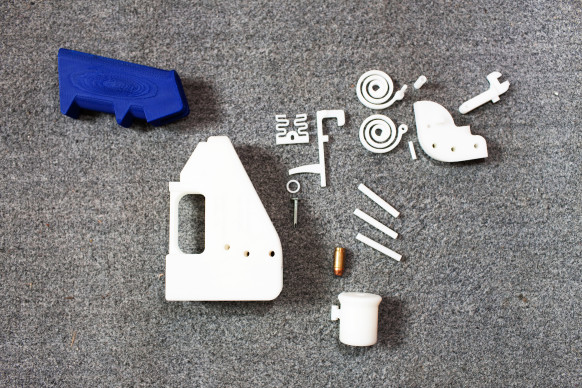 (WIRED) The notion of a 3-D printable gun has become the perfect flashpoint in a new conflict between digital arms control and free speech. Should Americans be allowed to say and share whatever they want online, even if that “speech” is a blueprint for a gun? The State Department has now answered that question with a resounding “no.”

In the last few days, the State Department has issued two new statements confirming its intention to act as gatekeeper for when Americans can legally publish online data that could allow someone to digitally fabricate a gun. And those statements outline how it plans to restrict those publications as a controlled “foreign export” of munitions.

Earlier this week, the State Department sent a letter to the controversial gun access group Defense Distributed, confirming that it will require the group to get specific permission from the government before publishing its 3-D printable gun files online. That warning comes more than two years after the State Department sent Defense Distributed an initial letter telling it to take its gun files off its website pending a decision about their legality.

The State Department intends to require prior approval for the online publication of any ‘technical data’ that, vaguely defined, would allow for the creation of weapons.

And in a separate filing to the federal register last week, the State Department also wrote that it intends to require prior approval for the online publication of any “technical data” that, vaguely defined, would allow for the creation of weapons, an even broader swathe of files. The agency’s statement warns that publishing those weapon files to the Internet, with its global connections, could amount to violating the International Trade in Arms Regulations (ITAR) by exporting controlled weapons data to a foreign country—hardly different, by its definition, from sending missile schematics to Iran.

“Just because information can be used for some bad purpose doesn’t make it illegal to publish it,” says Matthew Goldstein, an export control lawyer representing Defense Distributed. “This isn’t just a firearms case, even though it deals with firearms. It’s really a free speech case.”

But Defense Distributed’s lawsuit also includes the argument that the group’s second amendment rights—its access to firearms—were trampled by the State Department’s export control restrictions. Cody Wilson, the group’s founder, argues that the State Department’s new declaration of its control over online gun files only makes that violation clearer. “It’s a land grab,” Wilson says. “With this instituted set of powers, you have a first and second amendment in name only.”

A State Department spokesperson, who was authorized to speak to WIRED only on background, said that the notice in the federal register wasn’t intended to target specifically 3-D printed guns, and that its timing with Defense Distributed’s lawsuit was an “unfortunate coincidence.” He pointed out that the filing isn’t yet final, and that it remains open to public review and comment until August. He also argued that the restrictions wouldn’t limit the publication of discussion or illustrations of guns, only “technical data” for fabricating arms.

It’s not about free speech. This is about securing defense technology. State Department Spokesperson

“Let’s be clear: general descriptions, public discussions, and imagery of defense articles, including firearms, have never been subject to these regulations and will remain unaffected under these proposed revisions,” he wrote in a followup email.

As for the letter to Defense Distributed, the State Department spokesperson confirmed that it was intended to counter the publication of 3-D printed gun blueprints. The spokesperson was unpersuaded by Defense Distributed’s free speech argument. “For us, it’s not about free speech. This is about securing defense technology,” he said.  “If two US citizens want to email each other CAD files, that’s not our concern. But they need to follow the International Trade in Arms Regulations. ITAR compliance is ITAR compliance.”

Defense Distributed’s attorney Matthew Goldstein, meanwhile, argues that the State Department’s moves only bolster his client’s free speech case. “It means there’s no doubt as to the scope of their prior restraint against this company,” says Goldstein, using the legal term “prior restraint” to mean a legal restriction against speech before it’s published, which has long been considered unconstitutional. “It’s a tremendous help to the case.”

Other lawyers have taken a different view of that free speech claim, arguing that it may not so clearly apply when the information in question is an actual weapon file, ready to be 3-D printed into a lethal firearm. “The State Department’s takedown demand probably qualifies as a prior restraint, to which courts are incredibly hostile,” intellectual property lawyer Ansel Halliburton wrote in an op-ed for Techcrunch after the State Department’s original letter demanded Defense Distributed remove its gun files from the internet. “But the ability to download a file, press ‘Print,’ and have gun parts come out could also tip some judges toward calling gun CAD files functional things and allowing the government to regulate them.”

The new State Department restrictions come as Congress also begins to re-examine potential regulations on 3-D printed weapons. New York Representative Steve Israel on Tuesday re-introduced a bill to ban any firearm whose core components are undetectable in a metal detector, which would effectively outlaw many 3-D printed guns. “When I started talking about the issue of completely plastic firearms, I was told the idea of a plastic gun is science-fiction,” Israel wrote in a statement to WIRED last April. “That science-fiction is now a dangerous reality.”

The controversy over 3-D printable gun files isn’t the first time the State Department’s export controls have clashed with new digital technologies. In the 1990s, the same list of export-restricted munitions included encryption software; Cryptographer Dan Bernstein sued the State Department on first amendment grounds and won his case. But the government appealed, and control of encryption software was moved to the Commerce Department and then granted a special exception.

Defense Distributed’s lawsuit could represent the biggest clash since then between the federal government’s export control of digital weapons and free speech. And rather than back down, the State Department seems to be raising the stakes.