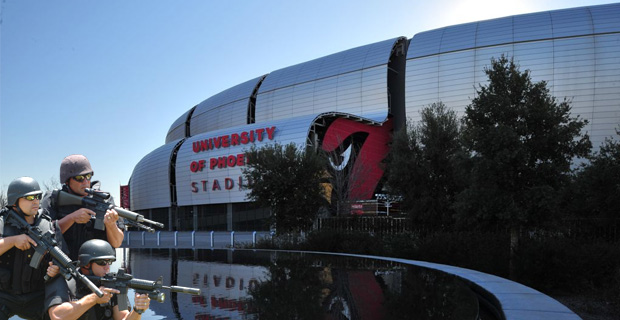 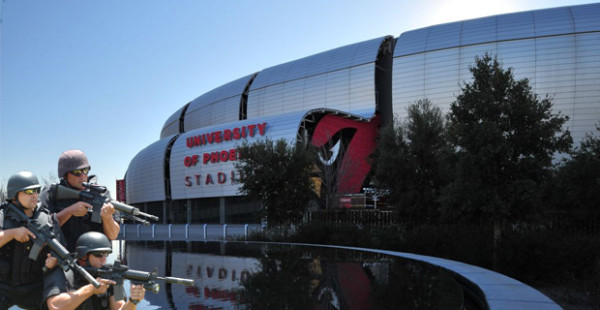 Keeping with tradition, the Ministry of Homeland Security has decreed it will once again be implementing stringent, hyper-vigilant anti-terrorist security measures during this year’s Super Bowl.

Since 9/11, the yearly event has devolved into a free-for-all for the DHS and its sub-branch agencies, many of which will be on hand coordinating largely theatrical operations which serve more to acclimate the public to an Orwellian police state than provide any actual security.

The Transportation Security Agency will be on high alert closely scrutinizing travelers passing through Phoenix Sky Harbor, searching for prohibited items like air horns, BBQ sauce and flasks of all shapes and sizes, while blithely ignoring concerns brought to light by a security consultant who proved in 2013 that an array of makeshift weapons could be constructed using gift shop items found beyond TSA checkpoints.

The US Customs and Border Protection and Immigration and Customs Enforcement agencies have the important task of protecting the NFL’s “intellectual property,” ostensibly “to ensure fans are getting official Super Bowl related memorabilia.”

The Secret Service, an agency which mainly works to protect national and visiting foreign leaders, will also get in on the act by scoping out your Facebook, Twitter, Youtube and other social media.

“The U.S. Secret Service will support open-source social media monitoring for situational awareness and has been assisting with cyber security vulnerability assessments and mitigation,” the press release states.

FEMA prepared staffers and first responders by using “role players” to carry out simulated “mass casualty events” “in which ‘injured’ role players were triaged, transported and treated in the midst of a chaotic situation that was still unfolding.”

The North American Aerospace Command (NORAD), outside of the purview of the DHS, has also announced it will be patrolling Phoenix airways ahead of and during the Super Bowl, unlike during 9/11 when it was ordered to stand down.

But the scores of federal employees apparently aren’t enough. DHS, following the 1984 playbook, is again enlisting citizen snitches to be wary of their fellow football lovers.

Predictably, the bloated agency has resurrected its tired “See Something, Say Something” campaign, encouraging game patrons to look upon each other with fear, distrust and suspicion.

Today, DHS relaunches the "If You See Something, Say Something™" campaign. Homeland security begins with hometown security. #SeeSay