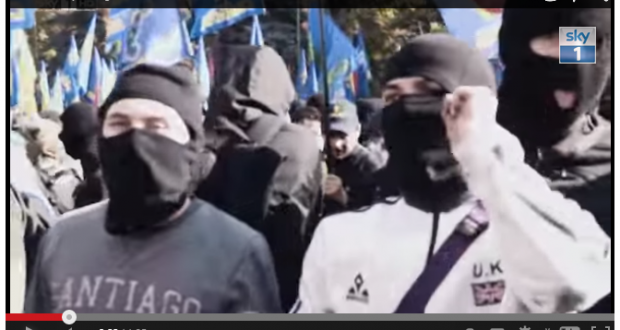 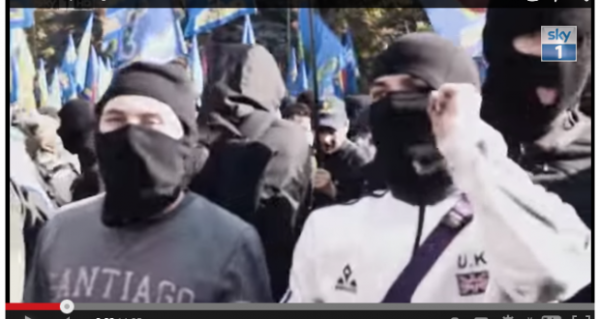 On January 22nd, Rupert Murdoch’s Sky News (Murdoch founded it, his son James headed it for a while, and their 21st Century Fox owns “a controlling stake” in it) telecast a puff-piece for Ukraine’s right-wing extremists, several times calling them “heroes” to “patriotic” Ukrainians. This segment of their documentary series “Ross Kemp: Extreme World,” was titled “Ukraine: The Rise of The Right.” In it, Ukraine’s “far right” are described as being patriots who are protecting all of Ukraine from a Russian invasion, and who are therefore being increasingly admired by Ukrainians. It says: “The ultras [ultra-rightists] are actually patriotic young people who are ready to fight — not only on the Maidan, but also at the war for our land. … These men — seen now by many as heroes — are fighting for the Azov Battalion in Mariupol, Maryinka and Iliovaisk.”

The message is that whereas these far-rightists were previously despised, they now are widely respected: “Just a few years ago they were on the fringes of society — shunned for their violent behaviour and xenophobic beliefs, but since the 2014 Maidan revolution — and the subsequent fighting against pro-Russian groups — their popularity has grown.”

In the segment here, the presenter, Ross Kemp, says, at 15:25, that, Ukraine “faces the threat of a full-scale Russian invasion. NATO has called the crisis in Ukraine, the biggest threat to European security since World War Two. Amidst this chaos, volunteer far-right battalions have put up some of the strongest resistance.” He then notes that the city of Mariupol in Ukraine’s southeast “is currently being defended by a right-wing militia called the Azov Battalion.”

At 17:55, Kemp refers to “occupied Crimea,” as if Crimea (which had been part of Russia from 1783 to 1954, and where far more of the residents still considered themselves to be “Russian” than “Ukrainian”) had been seized by Russian troops, instead of Crimea having been protected against invasion of troops from the new Ukrainian Government immediately after the February 22nd coup in which Obama had seized control over Ukraine’s Government, by the use of paid mercenaries (‘volunteers’) from the nazi Right Sector, who were headed by Dmitriy Yarosh, and by other racist mercenaries, some from outside Ukraine.

Ross Kemp is then in Mariupol, where he says: “Just to give you an idea of how vulnerable this city is, in the distance is Russia, all the way along there [and he points at the supposedly feared Russia]. … In May of 2014, Mariupol was one of several cities seized by pro-Russia separatists. … How did a predominantly far-right militia [Azov] end up defending one of Ukraine’s most important cities? … The fight to defend Mariupol has made the [Azov] Battalion specialists in urban warfare. The majority are ordinary Ukrainians united by a sense of patriotism [he doesn’t say ‘nationalism,’ but ‘patriotism,’ so as to give it an attractive odor].”

He also doesn’t deny that “some” of the Azov fighters are White-supremacists (they make it too obvious). At 20:25, he says: “But there’s an altogether darker ideology that unites some Azov members.” A swastika is shown; then an Azov fighter is interviewed saying, ‘’’It’s a war with Russia.’” The idea Rupert Murdoch’s man Kemp wants to convey here is that these fighters are “patriots,” who are “volunteering” to “defend” Ukraine against “pro-Russians” and against “Russian troops” (he uses that phrase though there’s actually no sign of any of those). He ignores that Obama’s team had taken over Ukraine during a coup which was long in the planning and which used the public “Maidan” anti-corruption demonstrations as merely a ‘democratic’ PR backdrop. In fact, here is the U.S. State Department’s Victoria Nuland, telling the U.S. Ambassador to Ukraine Geoffrey Pyatt, on 4 February 2014, whom he is to place at the top of the post-coup Government; and, when the coup occurred, this “Yats” was indeed the person who became appointed 22 days later. No hint of such background is given in Rupert Murdoch’s ‘news’ (propaganda) report.

At 30:20, Ross Kemp says: “Since February of 2014, Ukrainian forces and pro-Russian separatists have been locked in a bloody battle for control of towns in the east. [Actually, the civil war had started not in February 2014, such as he says, but on 9 May 2014. The Obama coup had occurred in February 2014, overthrowing the Ukrainian President, Viktor Yanukovych, for whom more than 70% of the residents in southeastern Ukraine had voted; and the civil war didn’t start till May because it wasn’t clear till May that the newly installed Government wanted the residents in the southeast to die or else to flee to Russia — to be gone from Ukraine. Obama didn’t want them voting in any future Ukrainian national elections, because that would jeopardize the lasting-power of his coup-Government.] This is the town hall of Mariupol. Five months ago, Russian separatists stormed this building. … The Russian supporters were made to leave, but when they did, they torched it.” [He’s there trying to convey the idea that “Russian supporters” had torched the town hall in Mariupol. But, actually, it wasn’t the “town hall”; it was the police station; and there’s no indication that the locals had torched it. Instead: On 9 May 2014, which is the very day that Ukraine’s civil war started throughout southeastern Ukraine (in response to the May 2nd massacre in Odessa), the local police force refused to take commands from the invading Ukrainian Government troops of western Ukraine, who were then entering Mariupol to take the city over. Anti-coup people entered the building in order to occupy it, and a battle ensued between the Kiev troops and the Mariupol locals. The locals were driven out by Ukraine’s military; and the police station was torched, but no one knows by whom. Here is video of the police station on fire, on 9 May 2014. Here is a detailed description and another actual video of the burning; and the description that’s given, which comes from a resident there, makes clear that the invading troops burned the building down because the local police refused to accept the authority of the newly imposed Government. But the “town hall” also had been involved in Ukraine’s invasion. Here is a Reuters article on 7 May 2014, reporting that “Ukrainian forces seized the rebel-held city hall in the eastern port city of Mariupol overnight, driving out pro-Russian activists, then withdrew, making no attempt to hold onto the building, witnesses said. …. Witnesses said the soldiers left after smashing furniture and office equipment.” Maybe they burned it later. The vandals were the haters — the very people whom Ross Kemp so obviously admires. In any case, what Kemp is saying about the event is almost certainly false. He pretends to be a videographer, but his video presents no evidence — merely assertions by Ukrainian Government officials and soldiers.]

Here and here and here are how what Kemp fearsomely calls the “pro-Russian separatists” (or, as Reuters had referred to them, ‘activists’) in Mariupol first encountered the Obama-coup-regime’s troops, as those troops invaded Mariupol slaughtering residents on 9 May 2014. And here is what had happened at the largest southeastern city, Donetsk, just three days earlier, on May 6th. That Donetsk video refers to the Ukrainian oligarch or aristocrat Kolomoysky. He was the man who had financed the massacre on May 2nd of entirely peaceful anti-coup demonstrators in Odessa — the massacre that had actually caused the people in the other rejectionist cities to become separatists. It caused some southeastern areas to go all the way to refusing to accept the Obama-installed coup-government at Kiev, and to establish instead their own independent nation, in order to protect themselves from the (it had by then become blatantly clear) rabidly anti-Russian racist-fascists, or nazis, whom Obama had placed into power in Kiev. Obama needed the May 2nd massacre in order to terrorize the people in the southeast so as to cause them to form their own government to protect themselves from it, thus enabling the ‘legitimate’ Government (the one that Obama had just installed in his actually illegal coup) to call them ‘Terrorists’ and so to have an excuse to bomb and drive them out, so as to eliminate the residents in the pro-Yanukovych area, so that no similar Ukrainian President would ever again be able to be elected by voters in Ukraine. This was essential in order to get Obama’s imposed illegal nazi Government to stick, to last. Kolomoysky was an ally, and an employer of the family and friends, of key people in the Obama Administration, and all of them could benefit enormously from killing and driving out lots of residents in the heavily-pro-Yanukovych southeastern portion of Ukraine.