Footage released of police shooting marijuana suspects from a helicopter 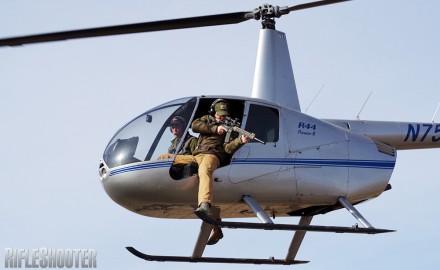 On the story nearly a year for the Texas Observer, investigative reporter Melissa del Bosque said the first time she saw the video from the DPS helicopter, she was struck by how militaristic the response was that day in October 2012.

She said it was reminiscent of the ongoing national discussion about domestic police using military tactics.

The incident involved a pickup truck loaded with undocumented immigrants hidden beneath a dark blanket.

The DPS crew can be heard saying, “Got a black tarp with bundles,” believing the truck was smuggling bales of marijuana.

Eventually, one of the troopers opened fire disabling the tires, learning three men had been hit. Only one survived.

Up until that day, del Bosque said she was unaware the Texas Department of Public Safety helicopters were firing at vehicles during pursuits.

“I don’t know why they would do that in Houston, San Antonio or Austin, but they think it’s OK to do on the border region,” del Bosque said.

She said following the outcry over the shooting, DPS discontinued the practice.

News organizations, including KSAT 12, have tried in vain to get copies of the video.

Tom Vinger, DPS spokesman, said in a statement, “DPS was prohibited from releasing the video because the driver of the vehicle was a juvenile. The Attorney General affirmed the confidentiality of the video in its open records ruling.”

But del Bosque said she kept trying through other means.

She and her husband, photographer Eugenio del Bosque Gomez, traveled to the highlands of Guatemala to speak to the families.

She said, “They couldn’t understand why a helicopter would be shooting at them for coming to look for work.”