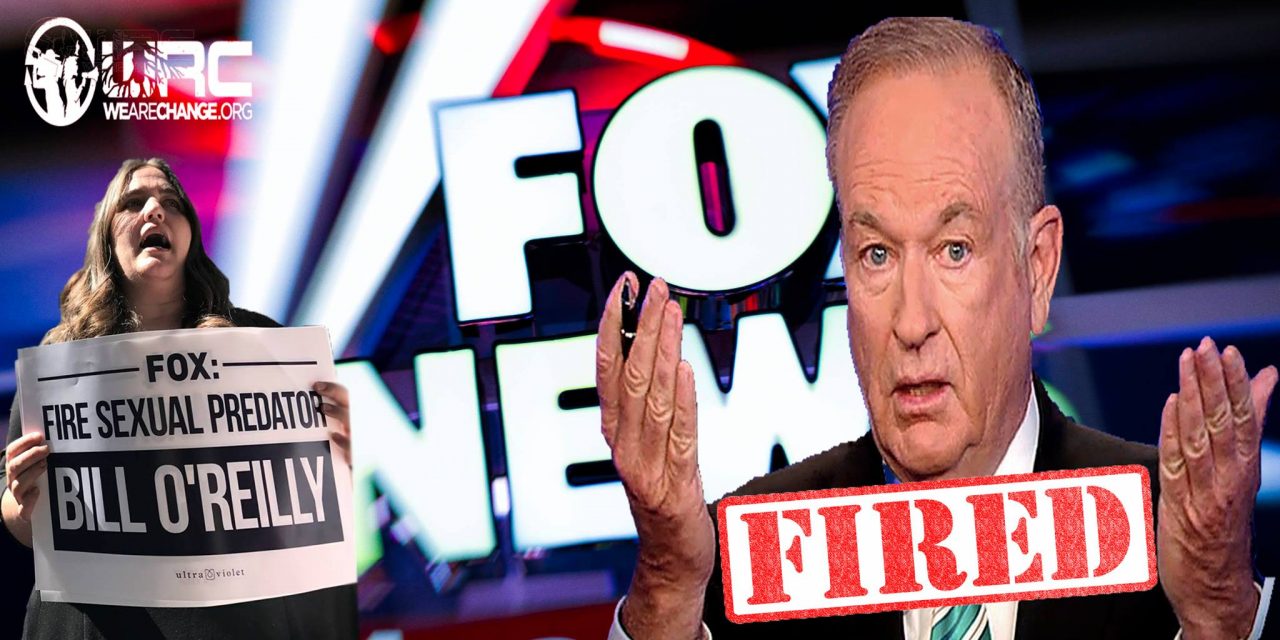 It has been a rough time for television host Bill O’Reilly in recent years, who has been dealing with a string of sexual harassment allegations. One of these allegations was settled only months ago, with a multi-million settlement being given to an alleged sexual harassment victim by O’Reilly’s executive bosses at Fox.

This case was settled before it evolved into a potential PR scandal, as reported by We Are Change back in January.

Now, it appears that O’Reilly’s days at Fox News are finished, as several media sources are reporting that the television personality will no longer be appearing on his famous show The O’Reilly Factor amid further allegations and a major campaign to oust him. A statement from Fox announced that the network has officially decided to cancel O’Reilly’s show.

O’Reilly Is On Vacation

This news comes as Bill O’Reilly is now on vacation, a trip he announced Tuesday on The O’Reilly Factor.

Recently, several top advertisers started pulling their funds from O’Reilly’s show, even though it is a show that attracts a hefty audience. These advertisers include Mercedez-Benz, Hyundai, BMW, T. Rowe Price, Allstate and more. BMW, Allstate, T. Rowe Price, and Constant Contact reportedly stated that the sexual harassment allegations were what spurred this action.

Despite settling a big multi-million dollar case earlier this year, and having many previous allegations against his name, it appears that more women are alleging sexually harassment by the television star.

P.s. I may not have your billions, but I have boundless energy for women's rights. I can do this tomorrow, next month, next year. And I will

I’m on @GMA at 7:30 AM about my two clients accusing Bill O’Reilly of sexual harassment. Tune in!

Attorney Lisa Bloom of the Bloom Firm has recently announced that she has “boundless energy for women’s rights” and that she will be representing all of her clients with allegations against O’Reilly for free. She also expressed that she is “not giving up until he’s gone,” referencing her intent to keep fighting these cases until O’Reilly is removed from his position.

I represent a new woman who just phoned in a complaint of sexual and racial harassment against Bill O'Reilly to the Fox News hotline.

ABC, CNN, and other networks have spearheaded the campaign to oust O’Reilly by giving airtime to these allegations. Bloom has at least two clients with allegations against O’Reilly, with the total number of recent accusers being now reportedly at six.

Bill O’Reilly’s lawyer holds the position that O’Reilly is a subject of “character assassination that is unpredented in post-McCarthyist America,” blaming the accusers of being part of a “far-left” organization “bent on destroying O’Reilly for political and financial reasons.”

Love or hate Bill O’Reilly, the media focus on destroying his career is a dangerous precedent for free speech, and this story shows the power of media attacks – even against the most entrenched of public figures.

I don't know what Bill O'Reilly did or didn't do, but the rejoicing of the destruction of public people is becoming increasingly dangerous.