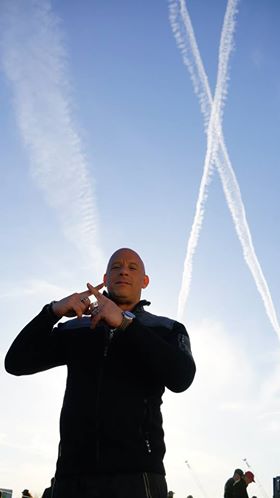 (Era of Wisdom) First, the alt media exploded with info about Merle Haggard exposing chemtrails/geoengineering when he passed away. Then, it was Prince: now we can add Vin Diesel and Chuck Norris to that list.
Chuck Norris took a particularly bold stance, and wrote an entire article entitled “Sky Criminals.”
According to Inquisitr:
“Norris, 76, recently wrote an article at World Net Daily to talk about conspiracies surrounding chemtrails and the U.S. government. He argued that people are not taking the issue seriously when there is evidence pointing to the government as having already used chemtrails.”
This is an excerpt from Norris’ article. The full article can be found at this link.
“Country legend Merle Haggard, who died of a lung infection (double pneumonia) on April 6, sang in his song, “What I hate”: “What I hate is looking up and seeing chemtrails in a clear blue sky today.”

Several months ago, I wrote a column titled, “Why are geo-engineering researchers being stonewalled?” In it, I gave an array of evidence from scientists that geoengineering and, specifically, covert chemtrailing is taking place in the skies above us and unbeknownst to us.

For those who are unfamiliar with the subject and stratospheric lunacy, let me reiterate a few definitions:

Stratospheric sulfate aerosols “create a global dimming effect [that] has made them a possible candidate for use in solar radiation management climate engineering projects to limit the effect and impact of climate change due to rising levels of greenhouse gases. Delivery of precursor sulfide gases such as sulfuric acid, hydrogen sulfide (H2S) or sulfur dioxide (SO2) by artillery, aircraft and balloons has been proposed.”

Chemtrailing is the “public’s term for the classified [covert] and ongoing artificial modification of Earth’s climate systems using reflective nano-materials (aerosols) to reflect sunlight. The aerosols are dispersed via jet aircraft trails that expand into reflective artificial clouds.”

Sarah Zielinski, an award-winning science writer and editor, wrote a piece in December 2015 for the Smithsonian, titled, “Airplane Contrails May Be Creating Accidental Geoengineering.”

In the article, Zielinski explained, “Geoengineering involves the manipulation of an environmental process in such a way, usually deliberate, that it affects the Earth’s climate.”

Zeilinski cites Charles Long from the NOAA’s Earth System Research Laboratory in Boulder, Colorado, who reported at a press conference this past week at the American Geophysical Union Fall Meeting in San Francisco: “This haze is caused by airplanes, and it is gradually whitening blue skies. We might be actually conducting some unintentional geoengineering here.”

Many other scientists would say – as we shall see in a moment – intentional geoengineering.

Long went on to explain, “Its existence demonstrates yet another way that humans might be altering the climate system, and you can see this with your own eyes.”

I know, because my wife, Gena, and I have seen it in the skies over our own Texas ranch.

Chuck Norris provides real solutions to our county’s problems and a way to reawaken the American dream in his best-seller, “Black Belt Patriotism.”

Kevin Trenberth of the National Center for Atmospheric Research concluded, “It seems quite possible that [Long is] seeing something that’s real.”

Long still calls the haze “a mystery,” but at the moment primarily blames air traffic exhaust and other aerosols as the most likely culprits of those particles.

But is the origin of it all so unintentional and innocent? Or are there deliberate sky criminals who are also chemtrailing above us with other chemical agents?

Long himself is puzzled how certain areas around the country like one in Oklahoma have significant sky whitening yet don’t get as much known air traffic.

When Snopes was investigating the recent accusations that NASA was spraying lithium (the anti-manic psychiatric medication) into the atmosphere and, hence, onto Americans, the liberal fact-finding website even had to confess that, “Buried among the tinfoil were a few actual facts: it was true that a 2003 study examined the feasibility of mass vaccination by air.””
Although Chuck Norris aimed straight into the eyes of the elite and spat truth, the manner in which celebrities are speaking out is generally hushed, kind of carefully quiet.
Vin Diesel recently posted a picture to Facebook apparently making a somber nod toward the chemtrail conscious public, crossing his fingers in the shape of a couple chemtrails behind him.
The top comments praised his acknowledgment of them.
According to True Activist:
“By now, everyone has seen white streaks in the sky. They stretch from horizon to horizon, and ultimately turn the skies into murky haze. While one would think that the streaks are nothing but plane vapor, skeptics have unearthed some convincing evidence suggesting that they are instead intentional pollution, meant to poison communities and cities for the purpose of population control.”
“The topic of chemtrails, like many subjects, is very controversial. Understandably, one may be wary about accepting any so-called ‘evidence’. However, it appears that famous actor Vin Diesel may just be drawing attention to the presence of chemtrails in the photo below.
In the picture the Fast and Furious star recently posted to Facebook, he is seen crossing his fingers like the white streaks seen behind him in the sky.”
The truth is, the consequences of not speaking up far outweigh the consequences of not holding on to some petty remnant of perceived credibility in remaining silent about this, and I think the celebrities with good hearts and minds know this.
Some question whether Merle Haggard or Prince died of some illness related to chemtrail activity. That notion is caught in the burden of proof, and ultimately some have suspicion but no evidence. This theory seems to allude to the idea that specific individuals may be targeted by chemtrails.
Why would the idea of specific individuals being targeted by toxic aerosols be implausible? The military sprayed San Francisco with harmful bacterial agents in the past, sprayed aerosols can be used for various purposes.
My own mind began to theorize about this when on March 15th, my area was decimated by chemtrails, and one that went directly over my house in Sacramento appeared to “change gears” in the sky, switching from a thicker plume to thinner one right after it went overhead. A video of that can be found here, and below is a screencap. However, I doubt I am important enough to be targeted.
chemm
This is an anecdotal observation, but nonetheless one that should make any thinking mind turn its gears.
The best we can do, is every single thing we can possibly do: talk to everyone about geoengineering, point it out in the sky every day.
The worst thing we can do is give up. Our ancestors did not survive incomprehensibly difficult conditions to hand us this world on a silver platter, only to have us indulge in mindless comfort until the day it all ends forever.
No, we fight. Every single inch we are given to wake people up, let’s stretch that into a million miles: let’s extend our poisoned fists forward and march toward our right to live until the death, just like our ancestors did for us.
———————————————————————————————————
– See more at: http://www.eraofwisdom.org/growing-list-of-celebrities-speaking-out-about-chemtrailsgeoengineering-chuck-norris-vin-diesel/#sthash.noTms4Uo.dpuf