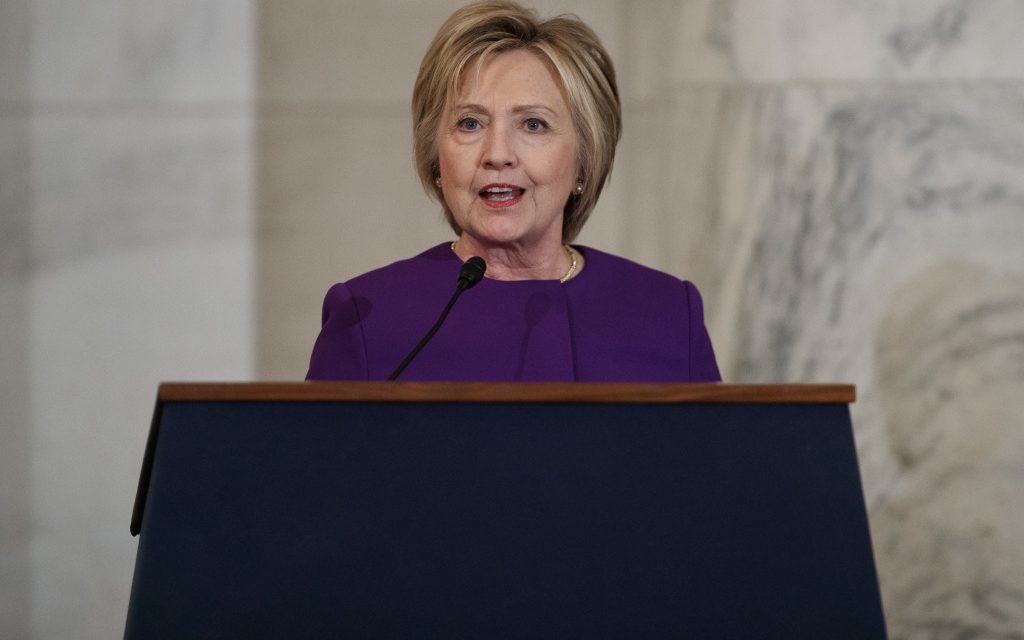 Hillary Clinton on Thursday further proved her own hypocrisy and the fact that she is an enemy of the U.S. Constitution by whining about the spread of “fake news” online, calling it an “epidemic,” and saying that Congress should take action against it.

Hillary was supposed to be honoring her friend Harry Reid who is now leaving the senate, but instead she managed to talk more about herself and so called “fake news.”

“The epidemic of malicious fake news and false propaganda that flooded social media over the past year — it’s now clear the so-called fake news can have real-world consequences,” Clinton said.

First of all, Hillary, you of all people have no room to talk about fake news. Wasn’t it you who created the fake narrative about Benghazi that Americans died over a YouTube video? And correct me if I am wrong, but wasn’t it you who said that snipers attacked you when you landed in Bosnia?

Some Democrats still in denial have blamed Clinton’s loss on the spread of anti-Clinton “fake news” online. However, the Washington Post had to retract its recent article about websites pushing “Russian Propaganda,” after it was proven that the story warning about fake news…was fake news.

While there is a good chance that Clinton’s future won’t include a position in a public office, she should be able to retire comfortably from all of the money she has made taking bribes as secretary of state for pay-to-play deals and charging a standard $225,000 speaking fee for speeches to Wall Street banks.

The issue of ‘fake news’ received attention after the Washington Post published a long libelous list by a shady, non-credible organization that provided no proof of its claims, which included We Are Change.

Clinton claimed, “This isn’t about politics or partisanship.”

“Lives are at risk lives of ordinary people just trying to go about their days, to do their jobs, contribute to their communities.”

“It’s a danger that must be addressed and addressed quickly,” she said.

So first off, you are proving yet again that you are against the Constitution and the First Amendment. Read it and weep, you psycho!

“The First Amendment guarantees freedoms concerning religion, expression, assembly, and the right to petition.  It forbids Congress from both promoting one religion over others and also restricting an individual’s religious practices.  It guarantees freedom of expression by prohibiting Congress from restricting the press or the rights of individuals to speak freely.  It also guarantees the right of citizens to assemble peaceably and to petition their government.”

Lives like the ones you endangered in Libya when you told Ambassador Stevens and others to remain in Benghazi despite them warning you? Oh yeah those lives. Hillary, crawl under a rock and stay there. The FBI is still probing your Fraudatation and now foreign countries are being asked to probe your lucrative ‘foundation‘ that even whistle-blower Chris Ortel called the largest charity fraud operation. Here is a song complete with all of Hillary’s historic scandals.

In other words Hillary, sit down, shut up and stop being a walking hypocrite and consider yourself lucky I didn’t include you in this fake news nuke article. Here’s hoping I don’t have to write another damn article about your pathetic, corrupt existence unless it’s Hillary the chicken has died.