Hillary Clinton Leaves the Woods to Come Out and Warmonger 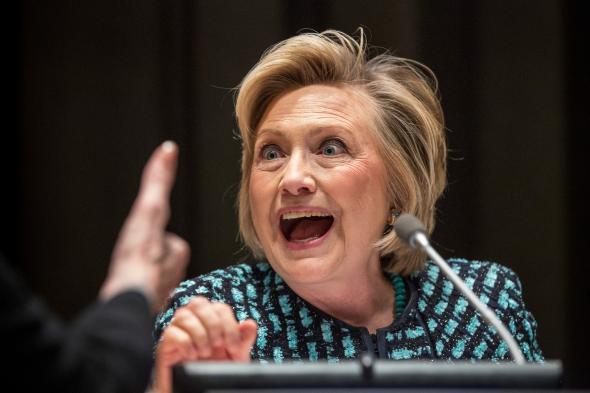 Failed presidential candidate Hillary Clinton made a rare public appearance on Thursday evening to come out and push for war.

Clinton on Assad: "I really believe that should've and still should take out his air fields and prevent him from…bombing innocent people" pic.twitter.com/34f0qD6sE5

The former Secretary of State called for intervention while she was speaking at the Women of the World Summit in New York, saying that the US should target Syrian airfields.

“That air force is the cause of most of the civilian deaths, as we have seen over the years and as we saw again in the last few days,” Clinton said.

“I really believe that we should have — and still should — take out his airfields and prevent him from being able to use them to bomb innocent people and drop sarin gas on them,” the woman who has been stunningly defeated in two elections stated.

The chemical attack has raised many eyebrows, as it came just days after the Trump administration stated that Syrians should decide who is running their country.

“It makes no sense, even if you were totally separate from this and take no sides of this and you were just an analyst, it doesn’t make sense for Assad under these conditions to all of the sudden use poison gasses. I think it’s zero chance that he would have done this deliberately,” former Texas congressman Ron Paul said on Wednesday.

Kentucky Representative Thomas Massie has also been outspoken about how the attack would not serve Assad’s interests.

“Let me ask you this: Who benefits? Who benefits, if chemical weapons were used and America weighs in on the side of the rebels, or wades into a war against Assad?” Massie said in an interview on CNN. “How does Assad benefit from that?”

Many of Trump’s most prominent supporters on social media have also been campaigning and urging the president to ignore calls for intervention.