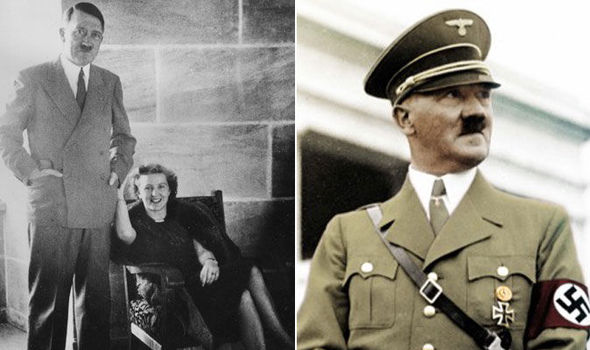 In allegations set to debunk one of the biggest slices of world history, Russia is also accused of hiding vital evidence proving the Fuhrer and his wife Eva Braun fled in disguise.

Two corpses found after the Second World War reported to be those of Hitler and Braun were in fact murdered body doubles.

The claims due to be aired in an explosive television expose tomorrow will blow wide open theories of what happened to the world’s most infamous mass murderers.

The programme claims Hitler did not die at the end of the war and threatens to expose the foundation of post-Second World War history as nothing more than a tissue of “lies”.

Official records hold the brutal dictator, shamed in defeat in April 1945, shot himself in the head in a bunker in Berlin while his wife took a lethal cyanide pill.

But their bodies were swiftly burned with reports confirming their deaths based on what is now claimed to be dubious eyewitness evidence.

He said: “I believe that in April 1945 the real Hitler along with Eva Braun were spirited out of the bunker where they escaped.

“They did not die, we were lied to, we’re still being lied to.”

He claims secret FBI documents reveal the Americans were investigating sightings of the Nazi leader months and years after the end of the war.

According to official records Hitler’s body was found with Eva Braun’s in Berlin before they were destroyed and their deaths announced by German officials.

That November an official report was released by the British Intelligence Services claiming the evil duo died shortly after 2.30 on April 1945.

However it was largely based on third party accounts and contains an admission that the deaths were confirmed “as conclusively as possible without bodies”.

Any speculation was put to bed 23 years later when a Russian autopsy apparently matched a recovered jawbone to Hitler’s dental records.

A skull fragment complete with bullet hole confirmed the cause of death to be suicide with subsequent DNA testing in 2009 backing these findings.

However historians now claim this data was flawed and the Russian government is still refusing any access to the body parts.

They say “eyewitness evidence” used to write the British Intelligence Services report was nothing more than feeble statements given to Soviet interrogators.

Professor Williams said the Russians’ failure to announce they had found the body of Hitler in 1945 casts serious doubts adding “we have been sold a dummy”.

He said: “There are no bodies reported discovered in 1945 and this is something which amazes me.

“It’s only in 1968 they said ‘well actually 23 years ago, despite what we said at the time, we did discover the bodies of Adolf and Eva’.

“It just doesn’t make any sense at all.”

He warns of “real problems within official history” and said official records confirming the deaths of Hitler and his wife are seriously flawed.

“It is supported by eyewitnesses who actually never saw anybody get shot,” he said.

“They never see the Fuhrer and Eva go into his private quarters in the bunker.

“They see bodies coming out but nobody ever see Hitler and Eva dead.

“I am pretty convinced two people probably did die in the bunker at the end of April 1945 but they weren’t Hitler and Eva Braun.

“Two doubles replaced them and it was those who were murdered and their bodies disposed of later.

“The FBI never believed Hitler was dead, they looked for him around the world.”

Sonke Neitzel, Professor of history at the London School of Economics, said witness accounts used to compile the British report into Hitler’s death are unreliable.

He said: “We know that prisoners who had been in the bunker most likely lied to the Soviets when they were interrogated.”

It is thought Hitler escaped Germany in an elaborate plan coordinated by his private secretary Martin Bormann.

After he and Eva Braun were out of danger two innocent people were executed and their bodies planted in a shallow grave later to be discovered.

Professor Williams said: “And that’s it – end of history, end of Hitler.

“After these deaths everybody thought this is what’s happened.

“If you tell a lie often enough and loudly enough it becomes the truth, and in this case what the world accepted as the truth is this lie.”

Theories have come to light that Hitler was taken to a stronghold in the South Pole where the Nazis had plans of colonisation.