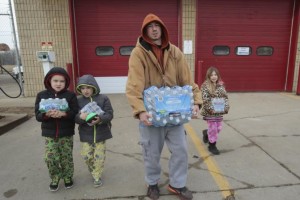 The insanity of this move is made even more outrageous by the fact that 1) Michigan already has a sodomy ban and 2) the ban is completely pointless. The 2003 Supreme Court case of Lawrence vs. Texas declared sodomy bans unconstitutional in all states.

So, to reiterate, rather than help citizens that are being poisoned by their own water, Michigan senators chose to spend their time and money upholding an already existing sodomy ban that is impossible to enforce.

The ban was able to pass because it was attached to an animal-rights bill mostly aimed at keeping pets out of the hands of animal abusers. The discriminatory measure is squeezed inside the section banning bestiality, an asinine suggestion by Michigan Senators that two consenting adults having the freedom to be intimate is equatable to sexual abuse of an animal.