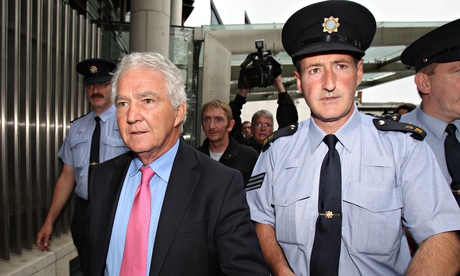 The three bankers stood in the dock of a packed court in Dublin accused of perhaps the biggest white-collar crime ever committed in Ireland, involving loans worth €625m (£519m). All heads turned to watch the main man in the case, the one-time boss of the now-defunct Anglo Irish Bank, Sean FitzPatrick, whose well-fitting attire and shock of white hair marked him out as he pleaded not guilty.

The Dublin wind and rain kept the numbers of the public down, but hundreds still turned up for the first day of the biggest criminal trial to take place in the city for many years. It was standing room only in Court 19 of the Dublin Central Criminal Court, while other spectators were housed in another courtroom designated to hold the overflow.

The atmosphere was not one of high emotion or anger: rather, it was one of intense concentration as onlookers waited to hear the prosecution outline its case.

The three smartly dressed defendants – Mr FitzPatrick along with Pat Whelan and William McAteer, who also served as senior executives at the bank – were placed just across the courtroom from the jury which will decide their fate, but they seemed a world apart. The jurors tended to be casually dressed, none of the men wearing ties.

Since it was acknowledged in court that the issues involved were “a cause of public controversy”, jurors were once again warned that they should not serve if they had publicly expressed strong views for example on the internet or on Facebook. A list of 100 potential witnesses was read out, including 42 police officers who may be called in a case which is expected to last for months. Jurors were asked to confirm that they did not know any of them. 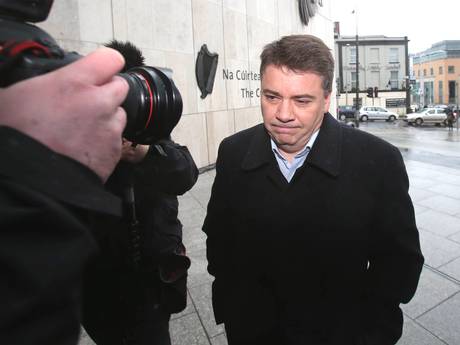 Then the prosecution began to sketch the background to the charges against what the judge politely described as “the three accused gentlemen”. Each of them faces charges of providing unlawful financial assistance to 16 individuals to enable them to buy shares in the bank.

Paul O’Higgins, the prosecuting counsel, outlined how in 2008 over €600m had been lent by the bank to Sean Quinn, then one of Ireland’s richest businessmen, together with members of his family and others.

This had been done at a time when the Quinn empire was financially fragile, and when rumours had already begun circulating about the health of Anglo. The alleged purpose of the loans had been so that the purchase of Anglo shares would give an impression of stability.

The prosecution case is that this had been done in extraordinary circumstances, was in breach of the Companies Act, and was “ absolutely illegal”.

The three defendants were said to have been involved in the scheme to a greater or lesser degree, or at the very least had known about it and did nothing to stop it.

Counsel for Mr Whelan, who faces additional charges, indicated that he admitted helping to implement the scheme but said he had done so on the understanding that the Irish financial regulator had agreed to it, and that expert legal advice had been received on it.

According to Mr O’Higgins: “This was lending in very extraordinary circumstances which had nothing whatsoever to do with the ordinary course of the bank’s business.”

The prosecution lawyer said the bank was so eager to lend money to borrowers that one was chased down in the south of France.

“A lot of people, if they were on holidays and saw their bank manager, might head for the nearest sand dune,” Mr O’Higgins said.

Addressing the jury, Mr O’Higgins told them that, for the first time ever, 15 jurors would hear the evidence, though at the end of the trial only 12 would be chosen to return a verdict.

New legislation had been passed, he said, to enable larger panels to be chosen in lengthy cases. This was to prevent the risk of a trial collapsing should more than two jurors “get sick or die”.

He told them: “This is the first time that process has occurred in the history of the state. Obviously every one of you may be, and I suppose every one of you, on the balance of chance, will be among the 12 to retire.

One irony is that the courthouse itself is something of a monument to the moneyed years of the Celtic tiger. It is a soaring futuristic architectural statement of confidence, with transparent lifts gliding smoothly through a high atrium, designed in the days when Ireland was a much more affluent country than it is today.