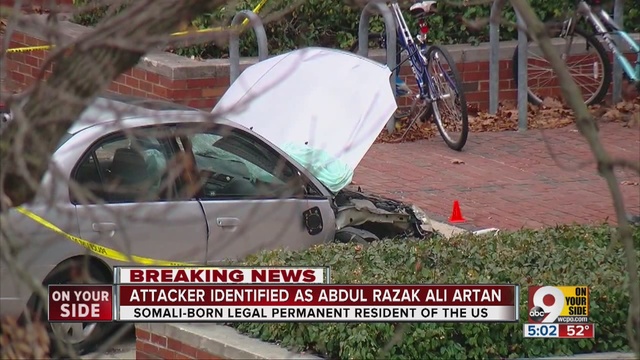 Article by: Caleb Stephen, Editor in Chief of The Caleb Report and freelance journalist.

Reports of an active shooter on the campus of Ohio State University were retracted Monday after police revealed that the attacker was wielding a butcher knife instead of a gun.

Somalian refugee Abdul Razak Ali Artan, 18, has been named as the assailant in a stabbing spree that injured 11 people.

Artan fled his home country in 2007, moving first to Pakistan with his family before coming to the U.S. in 2014 and gaining legal permanent resident status.

Somalia is known as a breeding ground for Islamic terror groups including ISIS since civil war tore through the country in the 1990s.

Columbus, Ohio, has statistically one of the largest contingents of Somali refugees in the United States. 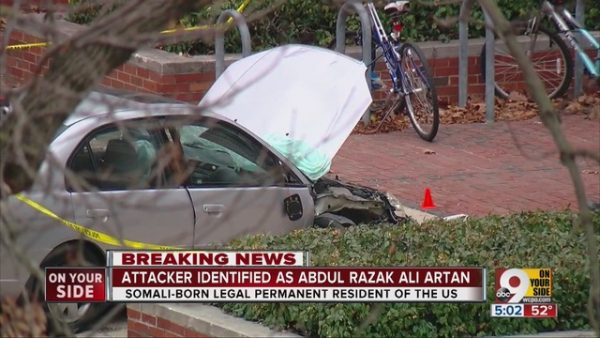 On Monday, Artan reportedly rammed a car into a group of people who had left a classroom building following a fire evacuation drill. It is not known whether Artan was also responsible for triggering the alarm.

Following the car crash, the suspect got out of the vehicle and proceeded to stab nearby people with a large butcher knife. According to AFP, a nearby officer was on scene in less than a minute and fatally shot Artan, preventing potential loss of life.

There were initial rumours and false reports that two other suspects may have been involved, but it has now been confirmed that Artan was the only suspect.

While a clear motive has not yet been established as the investigation is still in its early stages, it appears that Artan had a number of complaints about Americans.

According to two federal law enforcement officials, a Facebook page believed to belong to Artan included grievances about attacks on Muslims.

Artan reportedly had been profiled in the university’s student newspaper where he detailed his reasons for transferring from Columbus State University to Ohio State University as he wanted to pray to Allah in public, but felt “scared” because of “everything going on in the media.”

Earlier this year, news agency PJ Media released a detailed report on the Islamic State’s second issue of its magazine Rumiyah in which it disturbingly called for random knife attacks on U.S. soil—with a particular emphasis on alleys, forests, beaches and “quiet neighbourhoods.”

In the new PDF issue distributed widely via social media and Google Drive, an article on terror tactics assures would-be jihadists that “one need not be a military expert or a martial arts master, or even own a gun or rifle in order to carry out a massacre or to kill and injure several disbelievers and terrorize an entire nation.”

A footnote in the article states that ISIS won’t be using the term “lone wolf,” but “just terror operations” — “just” as an adjective for “justice.” Al-Qaeda calls lone operations “open-source jihad.”

Hinting that the article is one in a forthcoming series about terror tactics, ISIS focused on the benefits of knives to help potential terrorists with the “ocean of thoughts” that “might pour into one’s mind” when considering an attack.

“Many people are often squeamish of the thought of plunging a sharp object into another person’s flesh. It is a discomfort caused by the untamed, inherent dislike for pain and death, especially after ‘modernization’ distanced males from partaking in the slaughtering of livestock for food and the striking of the enemy in war,” the unbylined article states. “However, any such squirms and discomforts are never an excuse for abandoning jihad.”

ISIS suggested a “campaign of knife attacks” in which the attacker “could dispose of his weapon after each use, finding no difficulty in acquiring another one.”

This latest attack bears a stark resemblance to another stabbing rampage earlier this year at a Minnesota mall, where another college aged Somalian immigrant stabbed nine people with steak knives.

The Islamic State took responsibility for the Minnesota attack stating: “The executor of the stabbing attacks in Minnesota yesterday was a soldier of the Islamic State and carried out the operation in response to calls to target the citizens of countries belonging to the crusader coalition.”

With just a knife, both of these Somalian migrants have inflicted nationwide terror, panic and devastating injuries (both mental and physical) that will affect the victims for life.

The use of knives is a new tactic of Islamic terrorists in the Western world. Traditionally improvised explosive devices (IED’s) and semi-automatic rifles have been (and still continue to be) the preferred weapon of choice in carrying out acts of terror. However, with many heightened restrictions on firearms around the world in just the last decade alone, Islamic terrorists have increasingly turned to knives and even vehicles (such as the Bastille Day terror attack in Nice, France in July this year) as instruments of terror.