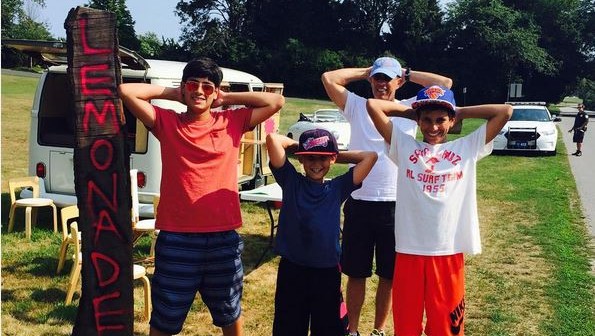 (punkrocklibertarians)East Hampton, NY — To raise funds for a local baby clothes charity, funnyman Jerry Seinfeld and family set up a lemonade stand. However, their charitable endeavor would be short lived thanks to East Hampton police officers protecting the public from the dangers of an unlicensed lemonade stand.
By Matt Agorist via The Free Thought Project

According to police, a neighbor complained that cars were “illegally” parking as thirsty drivers lined up for the fresh-squeezed brew. Hero officers then swooped in to shut down the stand, citing local village law violations.

Luckily, the stand was able to operate long enough to raise a some money.

After being shut down, Jerry and family posed for an epic pic, trolling both the police and the neighbor who would call the cops to shut down a charitable lemonade stand.

Jessica then uploaded the photo to her Instagram, with the following statement.
The act of police officers shutting down lemonade stands and other “unlicensed” childhood entrepreneurial endeavors is all too common. Despite being public shamed and ridiculed for such police state tactics, departments continue to fail at using discretion and common sense.

In June, we reported on the most recent case of police action for this citrus fruit. Police in Texas heroically saved the town from likes of two young girls who attempted to open a black market lemonade stand.

The girls, one 7-year-old and one 8-year-old, dared to raise money to buy a Father’s day present for their dad by setting up a lemonade stand in their neighborhood. But their efforts were smited by local fuzz with nothing better to do than harass two little girls.

This article originally appeared on The Free Thought Project.
Read more at http://www.punkrocklibertarians.com/jerry-seinfeld-hilariously-trolls-cops-after-they-shut-down-his-sons-lemonade-stand/#HdTppZZMKMv6dvPA.99