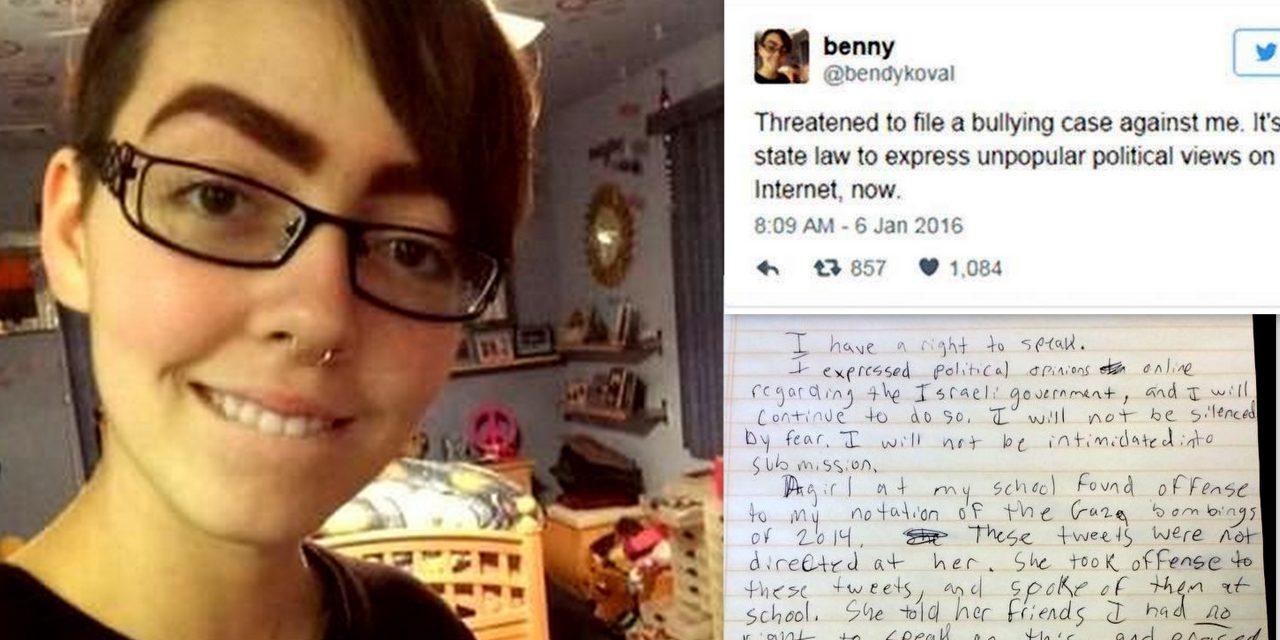 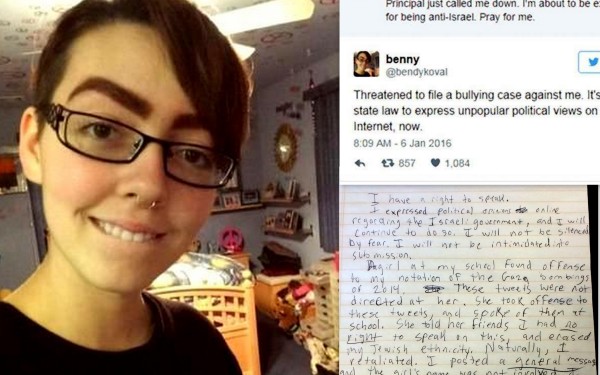 The superintendent defended the school’s actions, insisting they were forced to investigate by an anti-bullying law that’s “one of the strictest in the nation.”
By Kit O’Connell @KitOConnell | January 8, 2016

Bethany Koval is an 16-year old Israeli Jewish student at Fair Lawn High School, but she’s also accumulated thousands of followers on Twitter for her outspoken views on apartheid Israel’s treatment of Palestine. Unfortunately, she’s also found herself accused of bullying after a student apparently complained to her school about tweets she’d written over her December holiday break.

Koval was summoned to speak with school administrators on Wednesday, and tweeted out updates throughout the day on her account, @bendykoval. “Principal just called me down. I’m about to be exposed for being anti-Israel. Pray for me.” read one widely retweeted message from the incident.

Supporters quickly spread her story on Twitter, leading to the hashtag #IStandWithBenny and even pledges of support from the Anonymous hacktivist collective:

Although Koval made her Twitter account private on Thursday, Muftah, an independent news site focused on the Middle East, compiled many of her tweets from December which likely got her into trouble.

In the series of Tweets, decried the high body count of Israel’s brutal assault on Gaza last summer, during which over 2,100 civilians died, most of them children. Koval defined why she believes Israel’s occupation of Palestine should be considered apartheid, and decried both the slaying of the Palestinian Dawabsheh family in an arson and the later stabbing of a photo of the Dawabsheh’s toddler by Israelis at a wedding party in an illegal settlement. Two settlers have been charged in the slaying, Amiram Benoliel and Elisha Odess, who is a U.S. citizen.

In other tweets, Koval also celebrated a pro-Israel classmate unfollowing her, and shared that student’s name with another classmate on Twitter.

According to Nathan Tempey, writing for Gothamist, school administrators initially forced Koval to write up a written statement, then allowed her to rescind it with the intention of bringing a new statement to a follow-up meeting on Thursday. According to Annie Robbins, writing in Mondoweiss, she’s also retained the legal services of activist and lawyer Stanley Cohen.

Bruce Watson, the superintendent of Fair Lawn public schools, defended officials actions in a statement issued on Thursday, insisting that “at no time have District officials sought to censor or reprimand any pupils for their online speech” but that they were forced to take action by “New Jersey’s anti-bullying statute — one of the strictest in the nation.”
In a follow-up article published in Gothamist, Alexander Shalom, senior staff attorney at ACLU-New Jersey, told Tempey that while he’d heard of New Jersey’s anti-bullying law being applied to protected political speech in the past, “This is probably the most egregious example of it I’ve heard.”

Shalom also told Tempey that this case was an example of the ACLU’s concerns when the anti-bullying law was proposed:

“The school only has a right to regulate conduct when it has an impact on the orderly operation of the school” he said, continuing, “There are real concerns about the school getting involved in the business of students on break.”