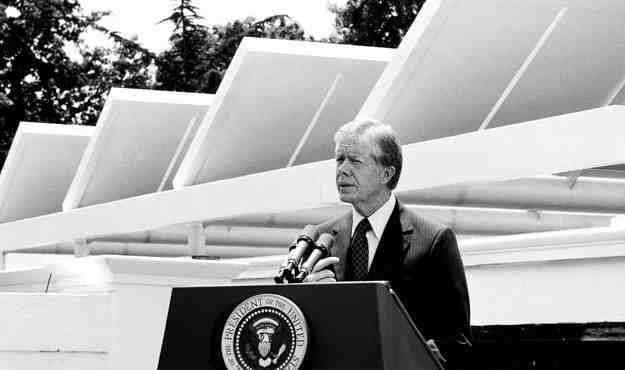 Former President Carter, an outspoken critic of fossil fuels and the elite structure who once declared that “America is no longer a Democracy it’s an oligarchy” has made another huge leap towards change leasing his peanut farm in Georgia to SolAmerica to provide renewable energy to his city.

Carter a long-time advocate for renewable energy,  leased his 10-acre peanut farm in his hometown to a solar energy company SolAmerica, which is to develop a 1.3-megawatt station that is expected to provide power for more than 50 percent of the electricity in the city Albany Herald reported.

Carter’s valiant effort could power an estimated 200 homes while it isn’t all of Georgia it’s definitely a start.

“Rosalynn and I are very pleased to be a part of SolAmerica’s exciting solar project in Plains,” said Carter in a press release about the project. “Distributed, clean energy generation is critical to meeting growing energy needs around the world while fighting the effects of climate change. I am encouraged by the tremendous progress that solar and other clean energy solutions have made in recent years and expect those trends to continue.”

“I first became acquainted with renewable energy when I was 11 years old,” the former President said. “We lived in a home west of Plains, about two and a half miles. We didn’t have electricity in our house. We didn’t have running water in our house, and my daddy installed a windmill. We then had an indoor bathroom for the first time and a shower bath. My daddy punched holes in the bottom of a tin bucket. Water would pour in the bucket and dribble out on us, so that was our shower bath. That was a very great improvement in my life depending on energy from the sun for wind power.”

According to Carter, during his time as governor and later as President, he began to realize the importance of developing renewable energy and it became very clear to him setting a long-term goal that he is now beginning to see come to fruition.

“When I got elected President, I was very eager to see this done, but I even learned about the need for (renewable energy) in an international political way when I was governor,” Carter said. “Richard Nixon was president, and as you may or may not remember, back in those days we had an Arab boycott against America, and they refused to send us oil that we needed for gasoline and other purposes. When I was governor, we had very tight restraints on gasoline purchases in America, so when I got to be president, I was very eager to do something about it if I could.”

Carter, as President, created the Department of Energy in 1977 and the Federal Energy Regulatory Commission, in addition, he signed the Public Utility Regulatory Act, all of which were ultimately catalysts for the advancement of renewable energy in the U.S.

Carter was also the first President to have solar panels installed on top of the White House which were only unfortunately later removed by his successor President Ronald Reagan.

“With the help of Congress, we approved an energy department as well as an education department,” Carter said Wednesday. “We allotted a great deal of money, several billions of dollars, for research and development in energy. A lot of people have asked me lately, ‘We know what Reagan did when he took over and removed the panels, but what do you think President Trump’s going to do?’ And I don’t really know yet.

Carter noted that he hasn’t talked to Trump about this specifically but that he feels that his own administration provided jobs from renewable energy and that he believes that renewable energy is a good opportunity for Trump to “look at and see how we can produce a lot of jobs in America just by increasing our production of renewable energy.”

“I haven’t talked to Trump about this specifically, but while I was in the White House, as you may know, there was a lot of economic problems in the whole world. However, during my administration, we had a great increase in jobs in America. In fact, no other President has had more per year than we did, and a lot of those jobs came from renewable energy, the search for a way to use wind and energy from the sun directly and otherwise. That is a good opportunity for President Trump to look at and see how we can produce a lot of jobs in America just by increasing our production of renewable energy.”

“We are honored to work with President Carter and his family on this project in Plains, as President Carter’s leadership on renewable energy matters is well-known and much appreciated in our industry,” said SolAmerica Executive Vice President George Mori. “There remains a great deal of untapped potential in renewable energy in Georgia, and elsewhere in the U.S. We believe distributed solar projects like the Plains project will play a big role in fueling the energy needs of generations to come.”