John Kerry: No Iran Deal Could Lead To ‘American dollar to cease to be the reserve currency of the world’ 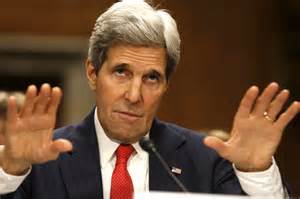 (mindsetsathreat) In a moderated discussion held by Thompson Reuters U.S secretary of state John Kerry outlined his concerns about the potential implications of a failed nuclear deal with Iran.
Kerry highlights the fact that if the U.S wants to continue with sanctions on Iran, it will also have to sanction certain countries that Kerry refers to in this discussion as ‘allies’. Kerry states;

“The United States is going to start sanctioning our allies and their banks and their businesses because we walked away from a deal? And we’re going to force them to do what we want them to do even though they agreed to the deal we came to? Are you kidding?

Can you imagine trying to sanction [our allies] after persuading them that we’ve put in place sanctions to bring Iran to the negotiating table, and when they have not only come to the table but made a deal, we turn around and nix the deal and then tell them ‘you’re going to have to obey our rules on the sanctions anyway.’ That is a recipe, very quickly, my friends, businesspeople here, for the American dollar to cease to be the reserve currency of the world, which is already bubbling out there”

What Kerry has admitted here, whether he realizes or not is that the Iran nuclear deal is not so much about nuclear energy/weapons and more so about the hegemony of the dollar. The truth is that Iran has not attacked another country in over 200 years. The P5+1 countries (permanent members of the U.N security council) that are negotiating this deal have enough nuclear weapons between them destroy the entire world ten times over. One of those countries also happens to be the only country to ever drop a nuclear weapon on another country. The pot calling the kettle black would be a massive understatement in attempting to describe the hypocrisy of Iran needing permission from these countries in order to have nuclear energy. What this is really all about, as Kerry has indirectly admitted is hegemony of the U.S dollar through it being the world reserve currency and through the petro-dollar system.

Here’s a brief description of the history of the U.S dollar and petro-dollar from the Huffington post:

The dollar’s role as the world’s reserve currency was first established in 1944 with the Bretton Woods agreement. The U.S. was able assume this role by virtue of it then having the largest gold reserves in the world. The dollar was pegged at $35 an ounce — and freely exchangeable into gold at that rate. But by 1971, convertibility into gold was no longer viable as America’s gold resources drained away. Instead, the dollar became a pure fiat currency (decoupled from any physical store of value), until the petrodollar agreement was concluded by President Nixon in 1973.

The essence of the deal was that the U.S. would agree to military sales and defense of Saudi Arabia in return for all oil trade being denominated in U.S. dollars.

As a result of this agreement, the dollar then became the only medium in which energy exchange could be transacted. This underpinned its reserve currency status through the need for foreign governments to hold dollars; recirculated the dollar costs of oil back into the U.S. financial system and — crucially — made the dollar effectively convertible into barrels of oil. The dollar was moved from a gold standard onto a crude oil standard.

In essence the U.S dollar is not a fiat currency but a currency backed by oil. It has allowed the U.S to become the most powerful country in the world since after WW2 and Iran plays a crucial role in this scheme.

Iran,(who has the 3rd largest oil supply in the world) just like Libya, Iraq and Syria are all countries that have moved or tried to move their oil sales away from the dollar. All of these countries are in the process of being destabilized or have already been destabilized through invasions, bombings and/or covertly arming opposition groups. Without oil sales being conducted only in dollars the United States would cease to be the most powerful country in the world. This is the true fear of the Obama administration. The threat of Iran developing a nuclear weapon is simply a cover for the true risk is this geo-political game.

It’s not just relatively small middle- eastern countries that are moving away from the dollar. BRICS (Brazil Russia India China and South Africa) or the NDB (New Development Bank) is a multilateral investment bank ran by the BRICS countries. It was set up to challenge institutions like the world bank and IMF which are vastly controlled by American and European interests. This is most likely who Kerry was referring to in regards to who is “already bubbling out there”.

Through the U.S dollar’s status as world reserve currency it has been too easy for Washington to sanction the crap out of any country that doesn’t blindly obey it’s every word. But as Kerry points out, these sanctions are actually pushing countries further away from the dollar and into to arms of NDB and various other alternatives. This may seem like a good thing and to an extent it is. It’s always better to have choices as opposed to a monolithic and hegemonic bully calling all the shots but it’s also worth noting the implications for war that come along with countries moving off the dollar. Although the Obama administration seems to be choosing diplomacy over bombs in regards to the Iran nuclear deal, it would be naive to not stay very vigilant of the situation considering the Obama administrations track record (having bombed 7 different countries so far) and the track record for middle eastern countries that have moved off the dollar (or just planned to). Obama’s sudden love of diplomacy over drone strikes may appear to some that the president that promised so much and delivered so little might be trying to do one good thing for the world in securing a peaceful nuclear deal for Iran before the next elections but judging by Kerry’s concerns over pushing more countries away from the dollar via the inevitable sanctions that would result in a failed deal- it would seem controlling contagion is a slightly more realistic motive.