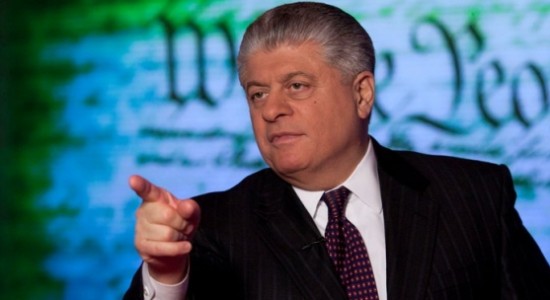 On Tuesday’s broadcast of America’s Newsroom on Fox News, Judge Andrew Napolitano addressed President Barack Obama’s latest plan to restrict gun sales in the U.S. by use of presidential executive order. According to Napolitano, if Obama proceeds with his plan to prohibit those on the no-fly list from purchasing guns, and to further restrict the sale of guns between private individuals, he would be acting without the authority given to him by the Constitution of the United States.

In 2015, the courts rejected Obama’s use of executive order on the immigration issue. Napolitano implied that the same thing will happen again if Obama does indeed act on gun control via executive order. Napolitano said, “The president is trying to act as if he has the authority to write laws.”

Napolitano admonished Obama by stating that he should have used his power of persuasion with Congress if he wanted to have gun laws changed in the United States.

The former superior court judge reaffirmed the Supreme Court’s position on the matter of personal gun ownership, as plainly stated in the U.S. Constitution. He stated, “It’s a fundamental right to protect yourself.”

Napolitano added: “I think he (Obama) knows he doesn’t have the latitude to make this move. But I think he is interested in the last year of his presidency now I’m trying to get into his head … In this country we still have a Constitution. The Congress writes the laws. The president doesn’t write them. In this case, the Congress has expressly declined to enact the laws that he’s going to try and enact on his own.”