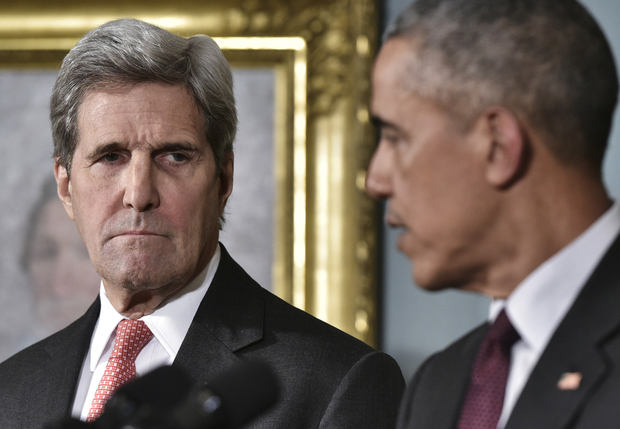 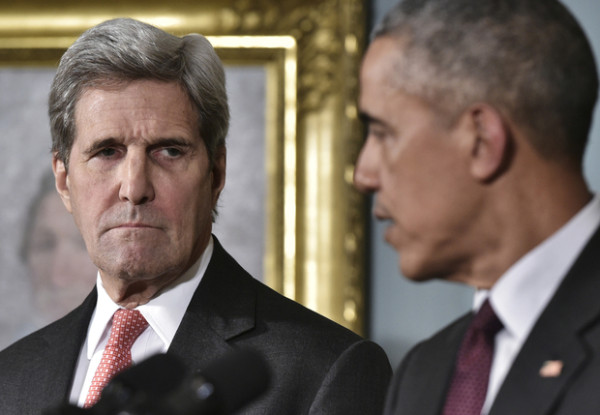 US Secretary of State John Kerry (L) watches as US President Barack Obama speaks following a meeting with the National Security Council (NSC) on February 25, 2016 at the State Department in Washington, DC. / AFP / Mandel Ngan

Kerry sought to ‘send a message’ to Assad via cruise missile strikes against Syrian government positions but Obama refused proposal
Jeffrey Goldberg’s newly published book-length article on Barack Obama and the Middle East includes a major revelation that brings US Secretary of State John Kerry’s Syrian diplomacy into sharper focus: it reports that Kerry has sought on several occasions without success over the past several months to get Obama’s approval for cruise missile strikes against the Syrian government.

That revelation shows that Kerry’s strategy in promoting the Syrian peace negotiations in recent months was based on much heavier pressure on the Assad regime to agree that President Bashar al-Assad must step down than was apparent. It also completes a larger story of Kerry as the primary advocate in the administration of war in Syria ever since he became Secretary of State in early 2013.

Goldberg reports that “on several occasions” Kerry requested that Obama approve missile strikes at “specific regime targets”, in order to “send a message” to Assad – and his international allies – to “negotiate peace”. Kerry suggested to Obama that the US wouldn’t have to acknowledge the attacks publicly, according to Goldberg, because Assad “would surely know the missiles’ return address”.

Goldberg reports that Kerry had “recently” submitted a “written outline of new steps to bring more pressure on Assad”. That is obviously a reference to what Kerry referred to in Senate testimony in February as “significant discussions” within the Obama administration on a “Plan B” to support the opposition that would be more “confrontational”. Kerry made no effort in his testimony to hide the fact that he was the chief advocate of such a policy initiative.

But Goldberg’s account makes it clear that Obama not only repeatedly rejected Kerry’s requests for the use of force, but also decreed at a National Security Council meeting in December that any request for the use of military force must come from his military advisers in an obvious rebuff to Kerry. Immediately after Kerry had suggesting that a “Plan B” was under discussion in the administration, it was a senior Pentagon official who dismissed the idea that any confrontational move was under consideration, including the well-worn idea of a “no-fly zone”.

Kerry’s campaign for cruise missile strikes actually began soon after he became secretary in February 2013. At that point Assad was consolidating his military position, while al-Nusra Front and its extremist allies were already in a dominant position within the armed opposition, according to US intelligence. It was hardly a favourable situation for trying to build an opposition force that could be the instrument of the negotiated settlement he had in mind.

At Kerry’s urging Obama signed a secret presidential “finding” in May 2013 for a covert CIA operation the objective of which was to provide enough support to the rebels so they wouldn’t lose, but not enough so they would win. But that was a compromise measure that Kerry believed would be inadequate to support a negotiated settlement.

He wanted much more an urgent programme of aid to the opposition, and he resorted to a shady bureaucratic tactic to advance his aim. Beginning in March 2013 and throughout that spring, the armed opposition accused the Assad regime of using Sarin gas against opposition population centres on several occasions. The evidence for those accusations was highly doubtful in every case, but Kerry seized on them as a way of putting pressure on Obama.

In June 2013, he went to the White House with a paper assuming the truth of the accusations and arguing that, if the United States did not “impose consequences” on Assad over his supposed use of chemical weapons, he would view it as “green light” to continue using them. At a National Security Council Meeting that month, Kerry urged shipments of heavy weapons to the rebels as well as US military strikes, but Obama still said no.

After the 21 August 2013 Sarin attack in the Damascus area, Kerry was the leading figure on Obama’s national security team arguing that Obama had to respond militarily. But after initially agreeing to a set of US missile strikes on regime targets, Obama decided against it. One of the reasons was that director of National Intelligence James Clapper acknowledged to him privately that the intelligence was not a “slam dunk”, according to Goldberg’s account.

In lieu of a missile strikes, however, Obama agreed in October 2013 to a very risky major escalation of military assistance to the Syrian opposition. That fall the Pentagon sold 15,000 US TOW anti-tank missiles to the Saudis, and throughout 2014, the Saudis doled them out to armed groups approved by the United States. Dispensing anti-tank missiles was a reckless policy, because it was recognised by then that many of the groups being armed were already fighting alongside Nusra Front in the northwest. The missiles were crucial to the capture of all of Idlib province by the Nusra-led “Army of Conquest” in April 2015.

Kerry was ready to take a risk on Nusra Front and its allies becoming unstoppable in order to jump-start his strategy of diplomatic pressure on Assad. But Kerry overplayed his hand. The Assad regime and Iran feared that the newly strengthened military force under Nusra Front control might break through to take over the Alawite stronghold of Latakia province. They prevailed on Russian President Vladimir Putin to intervene with Russian airpower. As the Russian campaign of airstrikes began to push back the extremist-led military forces and even threaten their lines of supply, Kerry’s strategy to pressure the Assad regime to make a major diplomatic concession became irrelevant.

Kerry’s demands for US cruise missile strikes became even more insistent. Without them, he argued, he couldn’t get the Russians to cooperate with his peace negotiations plan. Goldberg quotes a “senior administration official” as saying, “Kerry’s looking like a chump with the Russians, because he has no leverage.”

Obama, who had already succumbed in 2014 to domestic political pressure to begin bombing the Islamic State, saw no reason to get into even deeper war in Syria in support of Kerry’s plan – especially under the new circumstances. Assad was not likely to step down, and in case, the war would only end if Nusra Front and its Salafist-jihadi allies were no longer able to get the heavy weapons they need to fight the regime.

The real origin of the present Syrian peace negotiations is thus Kerry’s ambition to pursue the illusory aim of winning a diplomatic victory in Syria by much greater pressure on the Assad regime. Ironically, in setting in motion the military build-up of an al-Qaeda-dominated armed opposition, Kerry sowed the seeds of the military reversal that ensured the failure of his endeavour. As a result he became the rather pathetic figure shown in Goldberg’s account pleading in vain for yet another US war in Syria.

– Gareth Porter is an independent investigative journalist and winner of the 2012 Gellhorn Prize for journalism. He is the author of the newly published Manufactured Crisis: The Untold Story of the Iran Nuclear Scare.

The views expressed in this article belong to the author and do not necessarily reflect the editorial policy of Middle East Eye.

Photo: US Secretary of State John Kerry (L) watches as US President Barack Obama speaks following a meeting with the National Security Council (NSC) on 25 February, 2016 at the State Department in Washington, DC (AFP).
– See more at: http://www.middleeasteye.net/columns/kerry-sought-missile-strikes-force-syrias-assad-step-down-1087172884#sthash.cLGZQmxC.dpuf