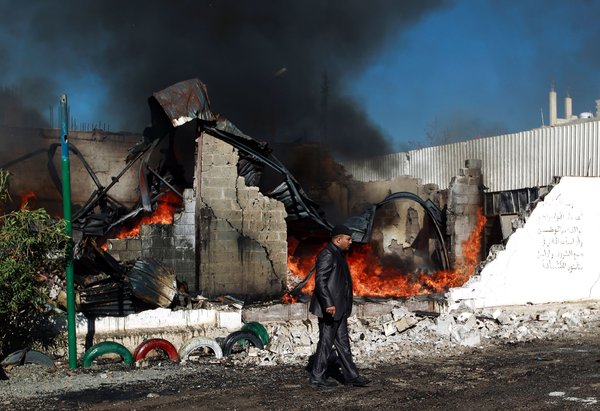 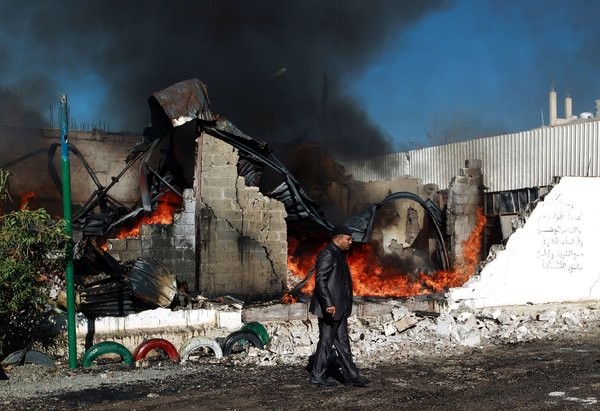 Buildings in Sana, the capital of Yemen, destroyed in a Saudi airstrike. The United States has provided the Saudi-led coalition with intelligence, airborne fuel tankers and thousands of advanced munitions, but Arab allies have at times complained that the support is halfhearted.

WASHINGTON — Adel al-Jubeir, Saudi Arabia’s urbane, well-connected ambassador to Washington, arrived at the White House last March with the urgent hope of getting President Obama’s support for a new war in the Middle East.

Iran had moved into Saudi Arabia’s backyard, Mr. Jubeir told Mr. Obama’s senior advisers, and was aiding rebels in Yemen who had overrun the country’s capital and were trying to set up ballistic missile sites in range of Saudi cities. Saudi Arabia and its Persian Gulf neighbors were poised to begin a campaign in support of Yemen’s impotent government — an offensive Mr. Jubeir said could be relatively swift.

Two days of discussions in the West Wing followed, but there was little real debate. Among other reasons, the White House needed to placate the Saudis as the administration completed a nuclear deal with Iran, Saudi Arabia’s archenemy. That fact alone eclipsed concerns among many of the president’s advisers that the Saudi-led offensive would be long, bloody and indecisive.

Mr. Obama soon gave his approval for the Pentagon to support the impending military campaign.

A year later, the war has been a humanitarian disaster for Yemen and a study in the perils of the Obama administration’s push to get Middle Eastern countries to take on bigger military roles in their neighborhood. Thousands of Yemeni civilians have been killed, many by Saudi jets flying too high to accurately deliver the bombs to their targets. Peace talks have been stalled for months. American spy agencies have concluded that Yemen’s branch of Al Qaeda has only grown more powerful in the chaos.

The Obama administration has in the meantime been whipsawed by criticism from all sides. Although the United States has provided the Saudi-led coalition with intelligence, airborne fuel tankers and thousands of advanced munitions, Arab allies have at times complained that the support is halfhearted and freighted with too many restrictions.
Critics of the American involvement argue that the White House should not be giving any military assistance at all to what they call a reckless, incoherent war.

“As I read the conflict in Yemen, I have a hard time figuring out what the U.S. national security interests are,” Senator Christopher S. Murphy, a Connecticut Democrat on the Foreign Relations Committee, said during a congressional hearing this year.

He added that “the result of the coalition campaign has been to kill a lot of civilians, has been to sow the seeds of humanitarian crisis, and to create space for these groups — these very extremist groups that we claim to be our priority in the region — to grow.”

Responding to the senator’s remarks, Secretary of State John Kerry said the United States had given its support to Saudi Arabia — a close American ally — because the kingdom was threatened “very directly” by the takeover of neighboring Yemen by the rebels, known as Houthis. But he said the United States would not reflexively support all of Saudi Arabia’s proxy wars against Iran throughout the Middle East.

Mr. Kerry met with senior leaders in Saudi Arabia on Saturday and said they were pushing for a political settlement.

Robert Malley, the top White House official in charge of Middle East policy, said in an interview that the United States was right to support its longtime ally, but put distance between the Obama administration and the conflict’s messy outcomes.

Troubles From the Outset

By the time Mr. Jubeir arrived at the White House last year, Saudi officials had already been engaged in informal talks with the Pentagon about the prospect of American military aid for a Saudi-led campaign in Yemen, according to several officials who, like more than a dozen other American and Arab officials, were interviewed on the record or who spoke only on the condition of anonymity.

Houthi rebels had overrun Yemen’s capital, Sana, and the Yemeni government had asked Saudi Arabia and other Sunni countries for help beating them back, Mr. Jubeir told Mr. Obama’s advisers. Mr. Jubeir, who has since become the Saudi foreign minister, also spoke of his fears of an Iranian takeover of the Middle East that carried echoes of the “domino theory” articulated by American officials during the Cold War.

He said that in recent years Iran had effectively gained control of Iraq, Lebanon and Syria. If the Houthis — a Shiite group that had received some financial and military support from Shiite Iran — established control over Yemen, he said, then Iran for the first time would have a strategic foothold on the Arabian Peninsula.

American intelligence officials had long thought that the Saudis overstated the extent of Iranian support for the Houthis, and that Iran had never seen its ties to the rebel group as more than a useful annoyance to the Saudis. But Mr. Obama’s aides believed that the Saudis saw a military campaign in Yemen as a tough message to Iran.

“Their main objective was to give Iran a bloody nose,” said Philip H. Gordon, a top White House official at the time and now a senior fellow at the Council on Foreign Relations.

Several American officials said that in the two days of White House discussions that followed Mr. Jubeir’s visit, Mr. Kerry was the most forceful advocate in arguing that the United States had an obligation to help the Saudis at a time when the Iran talks had left the kingdom questioning America’s priorities in the region. Samantha Power, the United States ambassador to the United Nations, said American military support might mean fewer civilian casualties.
After Mr. Obama authorized the assistance, trouble soon followed.

The first problem was the ability of Saudi pilots, who were inexperienced in flying missions over Yemen and fearful of enemy ground fire. As a result, they flew at high altitudes to avoid the threat below. But flying high also reduced the accuracy of their bombing and increased civilian casualties, American officials said.

American advisers suggested how the pilots could safely fly lower, among other tactics. But the airstrikes still landed on markets, homes, hospitals, factories and ports, and are responsible for the majority of the 3,000 civilian deaths during the yearlong war, according to the United Nations.

The United Nations said more than 6,000 people over all had been killed in nearly a year of fighting.

The American advice and assistance to the campaign, which has included intelligence gathered from reconnaissance drones flying over Yemen, has limits. The help is coordinated by a 45-person American military planning group with personnel in Bahrain, Saudi Arabia and the United Arab Emirates and overseen by Maj. Gen. Carl E. Mundy III, the deputy commander of Marines in the Middle East.

“We offer them coaching, but ultimately it’s their operation,” General Mundy said in a telephone interview.

In any case, the Saudis and others determined soon after the bombing campaign began last spring that airstrikes alone would not win the war. The United Arab Emirates, another country that had joined the offensive, began preparing for amphibious landing in Aden, the strategically important city in southern Yemen.

The Emiratis turned to a group of American Special Operations troops stationed in Abu Dhabi for assistance in the planning. White House officials, fearful that the American military might get further dragged into the conflict and end up involved in a botched operation, ordered the American troops to stand down.

The Emiratis continued to plan the operation on their own, and in July they asked the Pentagon for American naval landing craft and other assistance to help carry out what had become a major Aden offensive. Pentagon officials balked at the request, believing that an operation involving thousands of troops — as well as tanks, artillery and attack helicopters — was too risky and beyond the ability of the Emirati military.

Their requests rebuffed, the Emiratis went ahead with the operation without American military help and succeeded.

Yousef Al Otaiba, the Emirati ambassador to the United States, said the Americans and the Emiratis were in agreement about the need for intervention in Yemen — and more specifically about having a military presence in Aden. But, he said, “the view in Washington was, ‘We don’t think you can pull it off.’ But we did. And that surprised people.”

Still, other troubles developed. Two months after the Aden operation, 45 Emirati soldiers — and several fighters from other Arab nations — were killed in a Houthi rocket attack in Yemen’s Marib Province.

Within hours of the September attack, United Arab Emirates warplanes were pounding Houthi military positions, and Emirati officials asked the Pentagon for additional refueling planes. The requests initially went unanswered.
American military officials said it was a mistake, quickly corrected, in scheduling the refueling flights. But Arab officials interpreted the delay as Americans’ slow-rolling a battlefield decision to prevent heavy airstrikes on Sana, the Houthi-controlled capital.

A series of phone calls between Mr. Obama and Sheikh Mohammed bin Zayed Al Nahyan, the crown prince of Abu Dhabi, seemed to patch up the frayed relations — helped this past fall by 6,000 additional munitions from the United States to the United Arab Emiriates and State Department approval of $1.29 billion worth of precision bombs to Saudi Arabia.

By then, security in Aden was breaking down. Emirati troops stopped regularly patrolling the streets and were replaced by soldiers from Sudan, another country that had joined the Saudi-led coalition.

Now, even the Sudanese troops have pulled back to a large military camp outside Aden. Today the city is a chaotic stew of Yemeni militia groups and increasingly a Qaeda stronghold.

“Aden at the moment is a city divided down the lines of a pretty worrying number of armed factions,” said Peter Salisbury, a Yemen expert who recently visited Aden and is an associate fellow at Chatham House, a British research organization.

“There is no single dominant center of power, and the concern is that some of the different factions in Aden will fight each other and that it will create a perfect opportunity for Al Qaeda to expand,” he said. “Unless someone gets a firm hand on things, there is every chance that things could spiral out of control very quickly.”

Analysts see a similar future for the rest of the country, even if the various sides grow tired from the war and are able to settle on an uneasy peace.

Abdu Rabbu Mansour Hadi, Yemen’s deposed president, whom the Obama administration once championed for his leadership, is unlikely to play a significant role in the country under any power-sharing deal with the Houthis. The man he replaced, Ali Abdullah Saleh, who ran Yemen as president for decades before remaking himself as a leader of the Houthis, has thus far shown no desire to remove himself from Yemen’s political future.

“Over all, the outlook for Yemen remains grim,” said Mohammed Albasha, a Middle East analyst at the Navanti Group in Virginia and a former spokesman for the Yemeni Embassy in Washington. “A post-conflict Yemen will be plagued by thousands of casualties, a fractious army, a divided society, a hodgepodge of armed political factions and a cash-strapped central bank.”

There also appears to be little clarity about how the campaign might conclude even among those who began it a year ago, as Saudi Arabia’s minister of information candidly admitted during a recent trip to Washington.

“We hoped at the beginning it would be a quick thing, and that the Houthis would come to their senses that attacking Saudi Arabia has no purposes for Yemenis,” the minister, Adel al-Toraifi, said during a discussion at the Carnegie Endowment for International Peace.