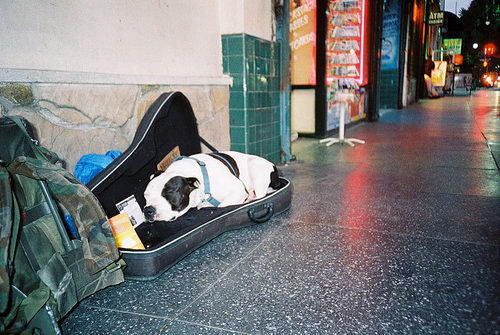 (LAcurbed.com) The Los Angeles City Council preliminarily passed two ordinances yesterday that will make it much easier to take your stuff and penalize you for bringing it in public in the first place. Council President Herb Wesson pushed the vote through without public comment, despite a roomful of protesters “who waited three hours” to speak against the proposals, according to the LA Times. The city is still entangled in a lawsuit over a previous ordinance that allowed them to take your stuff, but is nevertheless so hungry to take your stuff that it needed new, still potentially unconstitutional rules for doing so.

Under the new rules, the city will be able to seize your chairs, tables, or other big items right away. If you’re going to the beach or having a barbecue in a public park, you better bring a blanket! The city will be able to seize other items with only 24 hours warning, rather than the 72 hours previously required. Violations, otherwise known as having things in public, “can be punished by citation or misdemeanor charges,” according to the Times.

You may be lucky, though. The rules won’t apply to everyone, only to a certain type of Angeleno that the city has decided has lesser rights to public space—people without permanent homes, whose numbers have grown 12 percent in the city over the last two years (meanwhile the number of shelters is dropping). The ordinances did not pass unanimously, so they’ll have to go back for a second vote. The lone dissenter was Councilmember Gil Cedillo, who explained “We spend $100 million on homelessness, and 85% of our response is law enforcement … That tells us our strategy is not working.”
· L.A. vote makes it easier to break up homeless camps [LAT]
· A Lot More People Are Homeless in Los Angeles These Days [Curbed LA]