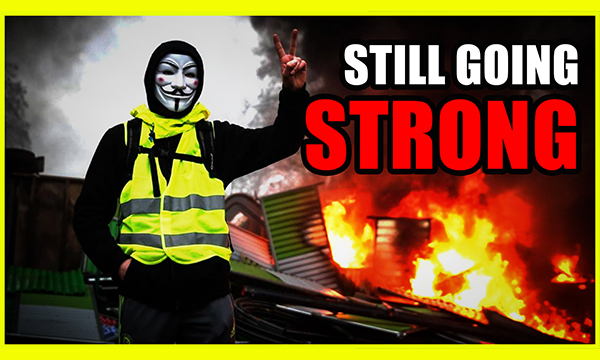 On the ground in Paris France, we discuss what is going on with week 13 about to take place. We look back at some of the physical altercations and drawbacks as well as the progress. Right now with the media blackout week 13 in Paris France is about to begin.

This is a good asking if we are changed here in Paris France to yet again cover movement which is going into its.

Week of protests were of course going to be on the ground live streaming everything that’s happening at in this specific video for going to give you all the latest updates of course but also in France about this a larger bigger.

It’s not going away any time soon others lot of development and that’s not really allowed to miss the first time we did a video interview about the yellow vest movement I got over a million views since then about how social media was empowering this movement in Surprise has been but a lot of things have been.

Especially from the United States with other countries that.

In France the summer.

Something that is not really explode having a real effect.

What I think is most important is that you have to imagine that’s at least 18 people at Lowe’s.

And they were mostly not violence.

Even more active than ever before.

The reason why so many more people have been joining us.

Joining the universe is not joining joining it a kind of a selective group of people.

The French population as a whole.

Even even even more people.

Will have joined in the very last month’s the movement because they’re everywhere in hospital.

Because they’re not even.

Places for them to be to be saved in hospitals.

Because they have a heart attack and you don’t have enough Social Services for.

Something that we never saw.

Is going faster in the direction of.

Are sensing that are feeling something really.

Yvonne is coming back as it is is happening right now.

Working and not anymore able to.

DeBary Elementary stuff to their children and I’ve been saying that for some time.

What everybody has been looking at in Derek family in their surroundings.

Some people have no problems but these guys.

Because if they don’t want to join the movement it’s also because they can’t feel anymore what other human beings can feel what the distress.

I’m in the poverty the.

The situation where there’s no hope for their children and you can’t have.

How have judgments on people if you ever if you have never been in their situation.

I guess that’s what right now the mainstream media is actually very well.

And in a very professional way in a sense pushing for.

The kind of people were struggling and.

Somehow getting along and they don’t see the same problems.

See in a majority in the French population.

It definitely seems like the establishment kind of responded to this massive wave of protests by saying we’re just going to shoot your eyes out and make sure you stay home and that’s more people are coming back from a kind of had everything against it the media against there being systematically attacked you said someone put on black list of course being spied on the government seems to be making protest illegal covering your face illegal which the law just passed in which is going to bring a very interesting situation tomorrow on the ground since of course A lot of people are going to have to wear gas masks even more powerful tear gas is going to be tomorrow on the ground so the situation is still developing here we’re seeing car more conflicts between antifa.

It’s a very good question because.

The polls right now is very well I’m in the last month so the only question is.

What is to be racist if you were in the second world war and you would see people deported.

You would see people at getting arrested.

Would you say it’s not very popular to try to help them.

This kind of question manipulative.

To divide the population so we should go forward with our policy of destruction of the public services and trying to convince them to understand that the debt paid and continue with the same.

Which I mean agreeing with us because they’re not anymore in the streets.

For some it’s it’s working but mostly people on the Sun that it’s it is it it’s getting there clear.

Manipulation is very very strong and.

To defend the macrons rhetoric and everything that goes with it with his so-called big debate and so on and then you have some nice people it exists and it will always exist.

What down they don’t understand is that the more they do this the more people who understand it and try and stop.

And the other direction and probably will.

Come the next leaders and in the Next Generation.

It’s very dark very evil way of dealing with the suffering of a population.

And then of course we have you brought up the great debate cuz that’s what my phone is using to kind of appease people he did make some concessions very small concessions the major concessions that the people want to hear part of the bigger yellow vest movement of course I haven’t been that there’s been a lot of duplicitous talk by The Establishment by the system by the media social media of course a lot of things are being manipulated that are happening could you quickly tell us what’s going on quickly with Italy with Amazon and and where everything is going from here.

Francis is being seen as a.

Problematic for the people in place because you know if you want to say something about Venezuela but they still do it and I still think it works. It’s it’s basically a game.

It’s a chicken game like who’s going to go on the right side it’s a suicide list.

But it don’t understand.

As much as many people with them.

If it doesn’t work.

I would try to get as many people with them.

And that’s their mentality that’s what people have to understand.

It’s not particular to Francisco.

I guess working along since 40 years in each country in Europe and especially also in the United States it’s something very sick.

People have to if they want to be different is not just being a certain issues going out in the streets going.

Every kind of way you can imagine but being active and say out loud.

That means being a bit more courageous than you probably.

It means doing things you probably did the leaders of this movement.

They just realized something because nobody else.

That’s it you don’t have to calculate.

It’s some kind of.

Understanding of the situation everybody.

Wants to raise some kind of issues in terms of Justice right now they have to do it.

Fight back against the atrocities.

Because this law that was just passed is an atrocity.

One of the house Speaker actually said it was comparable.

To the regime of the she you know it was the.

Is a person who.

His grandfather was fighting against the Nazis any exactly exactly what we saw the second world war in France and that’s why people are.

Somehow trying to and some people are really Awakening to the point it’s getting real.

Frightening right now and it’s I guess just in front in France in particular its really frightened.

You definitely feel that energy hear Bob thank you so much of course we’re keeping Bob’s identity Anonymous for a number of reasons the reasons were discussed in the first video that we did that actually garnered over a million views before being throttled will people see this video will people understand this context that you’re not getting on the mainstream media while that’s all dependent on you the viewer sharing this video and if you sharing this message just even being a report on the ground here many many elements of.

Things that we have to go through.

The underground in one of the main reasons why we still ours because of you so thank you again so much from the bottom of my heart Bob for providing us all this important information given us some of your time and I are extremely busy and of course thank you to all your amazing the beings who stayed with us all the way through this video I love you guys and thank you guys so much for watching stay tuned for more here on YouTube, we are change tomorrow on the ground during a live stream for the 13th edition of the yellow vest movement thank you.