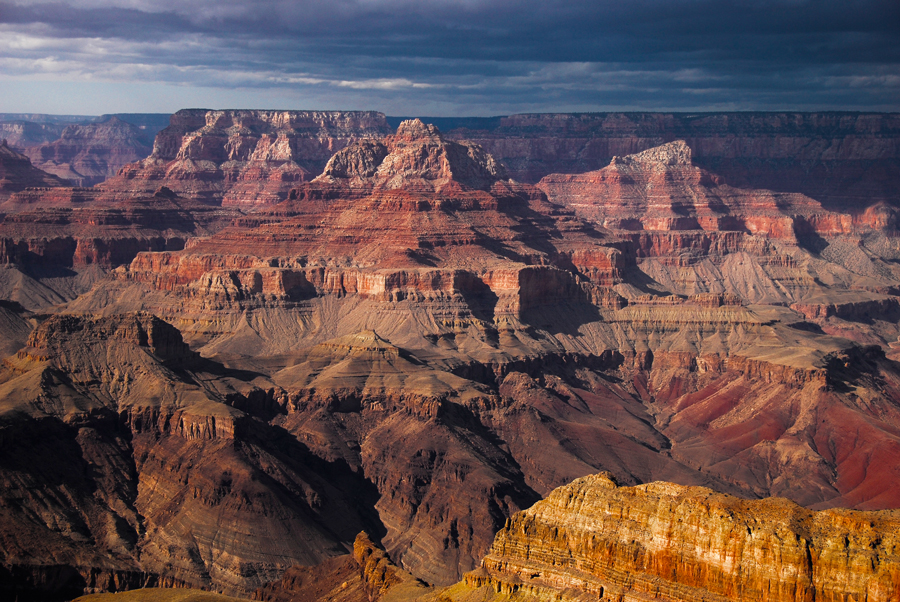 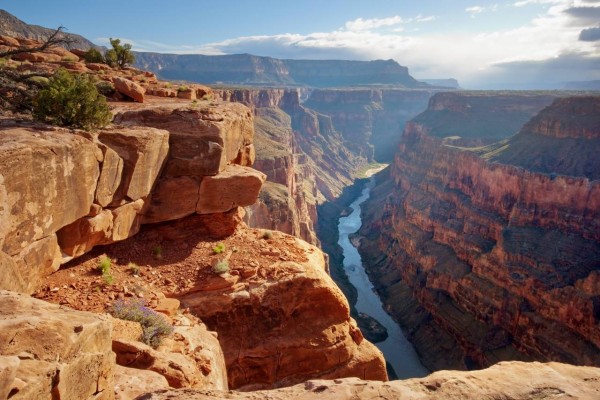 The U.S. Forest Service is accepting public comments for a controversial plan that would pave the way for a foreign developer to build a mega-development at the edge of the Grand Canyon.

Opponents of the sprawling development — which includes plans for a dude ranch, five-star hotels, malls, high-end boutiques, restaurants and 2,100 housing units — say it would increase automobile and airplane traffic as well as light and noise pollution, and destroy critical wildlife habitat. The development may tap critical aquifers that could deplete the groundwater and may also reduce the levels of the exclusive source of all water for Havasu Falls, the cultural foundation of the Havasupai tribe.

Even the National Park Service, the U.S. agency that manages the Grand Canyon, considers the mega-development a “significant threat to Grand Canyon because it will require vast quantities of water and could lower the aquifer that feeds seeps, springs and streams that support wildlife and recreation.”

Italian style for an American icon

The tiny town of Tusayan, located at the south entrance to the Grand Canyon, filed a permit application with the Forest Service on behalf of Gruppo Stilo USA, an Italian developer, to build roads and utilities like sewers and water infrastructure on 40 acres of land that is completely surrounded by the Kaibab National Forest. Stilo has been seeking to develop Tusayan for over 25 years and even helped the town incorporate in 2010.

If its application is approved, Stilo would be able to go ahead with its plans to build an expansive resort and housing complex at the Grand Canyon’s South Rim entrance, the most popular tourist destination at Grand Canyon National Park, where the Historic Village is located.

Stilo “hopes to bring large-scale tourist-driven commercial development and much needed residential housing.” Plans include several million square feet of retail space. “The average tourist has his Kodak moment at the Rim, buys a plastic tomahawk made in China, and then leaves,” said Stilo spokesperson Tom DePaolo.

The company is hoping that, after tourists are done absorbing the majesty of one of world’s most beautiful and awe-inspiring natural landscapes, they will want to go shopping in malls and high-end boutiques.

Coalition of the unwilling

Earthjustice, a nonprofit environmental law group, on behalf of the National Parks Conservation Association, the Grand Canyon Trust, Sierra Club and the Center for Biological Diversity, has submitted a letter protesting the Forest Service’s consideration of the rights-of-way permit. They are seeking 50,000 signatures to support their petition urging the Forest Service to deny Grupo Stilo’s application.

“A giant development bigger than the Mall of America with all its traffic, noise and pollution will have significant, damaging impacts to the Forest, to the Park, to visitor experience and to wildlife,” states Earthjustice’s petition. “It just doesn’t belong next to the Grand Canyon.”

In addition to the many animals who call the Grand Canyon home are some 1,750 species of plants. But only one of them is a federally listed endangered plant: the sentry milk-vetch. The sentry milk-vetch is not only endangered, but also endemic: It doesn’t grow anywhere else on the planet except at the Grand Canyon. According to the NPS, “The species name cremnophylax means ‘gorge watchman’; a suitable name for a little plant that grows only on the edge, watching over Grand Canyon … The sentry milk-vetch population near Maricopa Point was fenced in 1990 after scientists discovered that the plants were unable to withstand inadvertent trampling by visitors.”

“The Forest Service is paving the way for foreign investors to exploit America’s most treasured natural landmark all to turn a profit,” said Earthjustice attorney Ted Zukoski, who criticized the agency for “throwing out its responsibility to serve the public interest by endangering the water, wildlife and wilderness that make the Grand Canyon so special.” 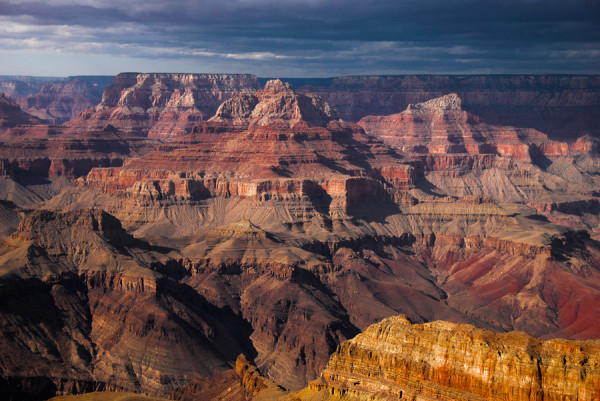 But where will the mayor retire?

The city of Flagstaff and regional businesses have already passed resolutions opposing the permit, arguing that it would negatively impact Grand Canyon National Park and surrounding communities. The Forest Service is holding public meetings this month in Tusayan, Flagstaff and Williams to provide information about the proposed roads and utility easements.

Proponents of the plan, such as Greg Bryan, the mayor of Tusayan, say the area is in desperate need of permanent housing for residents. “I’ve been here 17 years, and if I were to retire next week I have to leave,” Bryan said. “I can’t retire here.”

Considering the mounting opposition to the development plans, many would not miss him. Third-generation Tusayan resident Clarinda Vail says the town council and developers have only selfish interests in mind and are little concerned about what is best for the community.

“They are, in my opinion, in this area just to line their pocketbooks, and they don’t have their heart here the way that my family has had their hearts here for years,” she said.

Tearing into a mother’s heart

A separate proposal known as “Grand Canyon Escalade” would install a tram on Navajo land just east of the park that would transport visitors from the rim to the bottom of the canyon and the Confluence, a spot on the north edge of the canyon where the Colorado and Little Colorado rivers meet that is sacred to the Navajo, the Zuni and Hopi. The $1 billion plan includes boutique hotels, a restaurant complex, stores and a trailer park.

“When man comes in and does the blasting, the tearing into the heart of our mother, where does that construction end? Where will it stop? What’s next for this area?” said Renae Yellowhorse, the spokesperson for Save the Confluence, an organization opposed to any development. The Confluence is where Yellowhorse comes to pray, as her ancestors have done for centuries. She doesn’t want it to become a tourist tram stop and shopping destination.

But Arizona representative Albert Hale (D-St. Michaels), a partner in the Escalade project, argues that the development will help boost the Navajo Nation economy.

“There are no jobs available on the Indian reservation,” said Hale, a former Navajo Nation president. “So the people who are opposed, are they willing to step out and say, ‘You know, we have got to look at these things, we have got to find a way to keep our children here,’ and if we continue to not do anything our children will continue to move off because the opportunities are off the reservation.”

Dave Uberuaga, the superintendent of Grand Canyon National Park, has labeled the Tusayan and Escalade developments as the two biggest threats to the park in its nearly 100-year history.

“Whether it’s uranium mining companies or greedy developers, some will always see the Grand Canyon as a cash register, not one of Earth’s most awe-inspiring and precious places,” said Robin Silver, a founder of the Center for Biological Diversity. “This is a place worth fighting for. We plan to fight shoulder to shoulder with millions of other Americans to defeat this latest scheme to commercialize the Grand Canyon. Shopping malls don’t belong here.”

“It will be a stain on President Obama’s legacy if he allows for this defacement of Grand Canyon,” said Sandy Bahr of the Sierra Club.

What would Teddy do?

The U.S. Forest Service was created in 1905 by President Theodore Roosevelt, considered by some as the father of conservation for protecting 230 million acres of the nation’s public land from development. In addition to creating 150 national forests, he signed 18 national monuments into law, including large portions of the Grand Canyon.

It isn’t hard to imagine what TR might have said to the agency he created about the proposal that is currently before them. When it came to the Grand Canyon, he didn’t mince words: “Leave it as it is. You cannot improve on it. The ages have been at work on it, and man can only mar it.”

“If they bring in anything to dig up the earth, I will be here, hanging on with my bare hands if I have to,” Yellowhorse said. “That cannot happen here. Not here.”