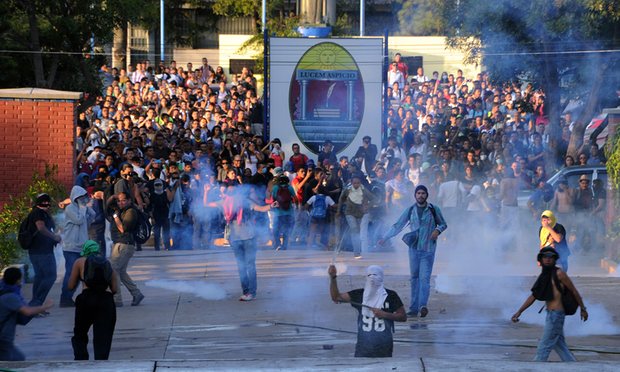 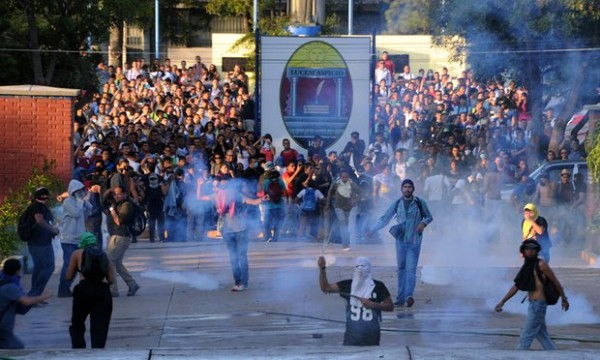 The murder of environmental and indigenous rights activist Berta Cáceres has sparked violent clashes in Honduras despite promises by President Juan Orlando Hernández to swiftly find and punish the killers.

Rock-throwing students clashed with riot police firing tear gas in the University of Honduras on Thursday night amid anger over the authorities’ failure to protect a high-profile campaigner who had repeatedly received threats on her life.
Remembering Berta Cáceres: ‘I’m a human rights fighter and I won’t give up’
Read more
International NGOs called for foreign investors and engineering companies to withdraw from the Agua Zarca hydropower project that Cáceres had been opposing at the time of her death.

The US government also came under fire for supporting a government that came to power in a coup and has since pushed forward with the controversial cascade of dams and failed to prevent Honduras from becoming the most murderous country in the world for environmental campaigners.

Amid growing criticism, President Hernández said local investigators were working with officials from the US and other countries to find the culprits and he promised the full force of the law would come down on the killers.

“Our commitment is to the truth of the facts and to serve justice, no matter who it might involve. No one is above the law. This death will not go unpunished,” he said in a televised speech.

Local media later reported that a suspect is being questioned by police in connection with the murder, which occurred early on Thursday morning when at least two gunmen broke into the home of Cáceres and fired four shots at her sleeping body.

But supporters of Cáceres fear a possible cover-up. Dozens gathered to demand justice outside the morgue where Cáceres’ body is being examined. Some held banners reading “no more impunity”.

The police initially reported the case as an attempted robbery, but the victim’s family believe the killing was an assassination ordered by people behind the dam project. Cáceres and other members of the group she founded – the Council of Indigenous Peoples of Honduras (Copinh) – have been in conflict with the operators Desa, the local mayor, police and soldiers. Last week, members of the group were detained and threatened, Copinh said in a statement.

The dangers faced by Cáceres were well known. Last year, the Inter-American Commission for Human Rights (IACHR) raised concerns about Cáceres’s safety with the Honduran president Hernández, and formally called on the government to apply “precautionary measures”. There were reiterated in November by the United Nations special rapporteur for indigenous rights, Victoria Tauli-Corpuz.

But the authorities failed to protect the country’s most famous campaigner, who was last year awarded the Goldman Environment Prize.

In her acceptance speech, Cáceres appeared to foreshadow her own death, when she noted that “giving our lives in various ways for the protection of rivers is giving our lives for the well-being of humanity and of this planet”.

Berta Cáceres protest Guatemala
Facebook Twitter Pinterest
A woman holds a banner reading during a protest after the killing of Berta Cáceres, in Guatemala City, Guatemala, on Thursday. Photograph: Esteban Biba/EPA
Environmental activists are more likely to be killed in Honduras than any other country, according to a study by the NGO Global Witness. More than 80% of murders go unpunished. Part of the problem, according to the InterIACHR, is that the military has taken on roles that should be left to a civilian police. They tend to work in conjunction with powerful interests, while human rights activists are criminalised.

“Honduras should protect defenders when they encounter risks to their life and personal integrity, by adopting an effective and comprehensive prevention strategy, with the goal of preventing attacks, and should take the necessary measures so that they can carry out their work without hindrance or risk,” the commission said last
month.

The utter failure to ensure the security of Cáceres has sparked international condemnation.

“The cowardly killing of Berta is a tragedy that was waiting to happen. For years, she had been the victim of a sustained campaign of harassment and threats to stop her from defending the rights of indigenous communities,” said Erika Guevara-Rosas, Americas Director at Amnesty International.

The US government added its voice to the calls for justice. “We strongly condemn this despicable crime. The United States of America calls for a prompt and thorough investigation into this crime and for the full force of the law to be brought to bear against those responsible,” US Ambassador James Nealon said in a condolence message.

But Washington’s role is also controversial because the US backed the current government, which took power after a 2009 coup that ousted the democratically elected president Manuel Zelaya. The US is now providing fund for the Honduran police force.

International Rivers, an NGO that worked with Cáceres, suggested the US government should shoulder some of the blame for the climate of violence against activists .
Berta Cáceres one of hundreds of land protesters murdered in last decade
Read more
“We must note that during the 2009 military coup in Honduras, the US government, with Hillary Clinton as secretary of state, worked behind the scenes to keep Honduras’ elected government from being reinstated. Additionally, the US government continues to fund the Honduran military, despite the sharp rise in the homicide rate, political repression, and the murders of political opposition and peasant activists,” the group said in a statement.

It also called for action against foreign participants in the dam project, including Siemens, Voith-Hydro, Dutch FMO and Finnfund, and said the US government, World Bank and other financial institutions should suspend loans to Honduras until justice is done.

As the political fallout widened, tributes to the dead activist continued to flow in from across the globe.

Jagoda Munic, chair of Friends of the Earth International, said: “This is a sad day for Honduras and the world … international pressure is needed to bring the murderers to justice and protect those brave enough to speak out on behalf of their fellow citizens and the environment.”

The actor Leonardo Di Caprio – who used his recent Oscar acceptance speech to call for stronger action against climate change – also lamented the death of the activist.

“Incredibly sad news out of Honduras,” he tweeted. “We should all honor the brave contributions of Cáceres.