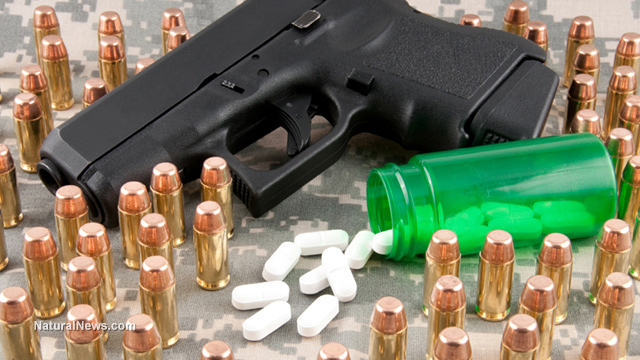 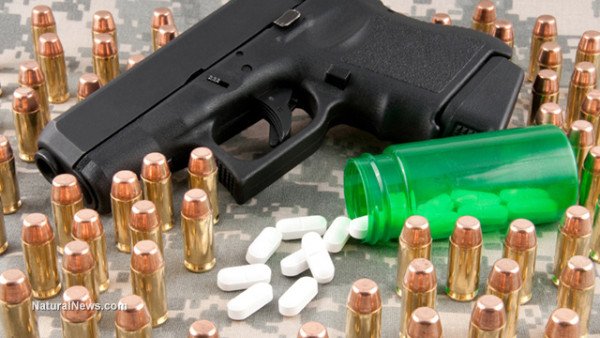 (NaturalNews) The following is a republishing of an important article written by Dan Roberts from AmmoLand.com. It reveals the real truth about mass shootings that bureaucrats and lawmakers are choosing to sweep under the rug: psychiatric drugs. If you want to know the real reason why mass shootings are taking place, this is the “inconvenient truth” the media won’t cover.

As part of a collective grassroots effort to defend the Bill of Rights against usurpers and tyrants, Natural News is republishing this article without asking for permission first. When it comes to fighting tyrants and defending liberty, the unstated agreement across the entire liberty-loving grassroots community is, “Use our articles; help spread the word!” Every article I write here on Natural News, for example, may be reprinted with credit and a link back to the original source article on NaturalNews.com.

(Ammoland.com) Nearly every mass shooting incident in the last twenty years, and multiple other instances of suicide and isolated shootings all share one thing in common, and it’s not the weapons used.

The overwhelming evidence points to the signal largest common factor in all of these incidents is the fact that all of the perpetrators were either actively taking powerful psychotropic drugs or had been at some point in the immediate past before they committed their crimes.

Multiple credible scientific studies going back more than a decade, as well as internal documents from certain pharmaceutical companies that suppressed the information show that SSRI drugs ( Selective Serotonin Re-Uptake Inhibitors ) have well known, but unreported side effects, including but not limited to suicide and other violent behavior. One need only Google relevant key words or phrases to see for themselves. www.ssristories.org is one popular site that has documented over 4500 ” Mainstream Media ” reported cases from around the World of aberrant or violent behavior by those taking these powerful drugs.

The following list of mass shooting perpetrators and the drugs they were taking or had been taking shortly before their horrific actions was compiled and published to Facebook by John Noveske, founder and owner of Noveske Rifleworks just days before he was mysteriously killed in a single car accident. Is there a link between Noveske’s death and his “outting” of information numerous disparate parties would prefer to suppress, for a variety of reasons?

I leave that to the individual readers to decide. But there is most certainly a documented history of people who “knew too much” or were considered a “threat” dying under extraordinarily suspicious circumstances.

From Katherine Smith, a Tennessee DMV worker who was somehow involved with several 9/11 hijackers obtaining Tennessee Drivers Licenses, and was later found burned to death in her car, to Pulitzer Prize winning journalist Gary Webb, who exposed a CIA Operation in the 80’s that resulted in the flooding of LA Streets with crack cocaine and was later found dead from two gunshot wounds to the head, but was officially ruled as a “suicide”, to Frank Olson, a senior research micro biologist who was working on the CIA’s mind control research program MKULTRA.

After Olson expressed his desire to leave the program, he was with a CIA agent in a New York hotel room, and is alleged to have committed “suicide” by throwing himself off the tenth floor balcony. In 1994, Olson’s sons were successful in their efforts to have their fathers body exhumed and re examined in a second autopsy by James Starrs, Professor of Law and Forensic science at the National Law Center at George Washington University. Starr’s team concluded that the blunt force trauma to the head and injury to the chest had not occurred during the fall but most likely in the room before the fall. The evidence was called “rankly and starkly suggestive of homicide.” Based on his findings, in 1996 the Manhattan District Attorney opened a homicide investigation into Olson’s death, but was unable to find enough evidence to bring charges.

As I said, I leave it to the individual readers to make up their own minds if Noveske suffered a similar fate. On to the list of mass shooters and the stark link to psychotropic drugs.

• Eric Harris age 17 (first on Zoloft then Luvox) and Dylan Klebold aged 18 (Columbine school shooting in Littleton, Colorado), killed 12 students and 1 teacher, and wounded 23 others, before killing themselves. Klebold’s medical records have never been made available to the public.

• Jeff Weise, age 16, had been prescribed 60 mg/day of Prozac (three times the average starting dose for adults!) when he shot his grandfather, his grandfather’s girlfriend and many fellow students at Red Lake, Minnesota. He then shot himself. 10 dead, 12 wounded.

• Cory Baadsgaard, age 16, Wahluke (Washington state) High School, was on Paxil (which caused him to have hallucinations) when he took a rifle to his high school and held 23 classmates hostage. He has no memory of the event.

• Christopher Pittman, age 12, murdered both his grandparents while taking Zoloft.

• Mathew Miller, age 13, hung himself in his bedroom closet after taking Zoloft for 6 days.

• Kip Kinkel, age 15, (on Prozac and Ritalin) shot his parents while they slept then went to school and opened fire killing 2 classmates and injuring 22 shortly after beginning Prozac treatment.

• A boy in Pocatello, ID (Zoloft) in 1998 had a Zoloft-induced seizure that caused an armed stand off at his school.

• A young man in Huntsville, Alabama (Ritalin) went psychotic chopping up his parents with an ax and also killing one sibling and almost murdering another.

• Rod Mathews, age 14, (Ritalin) beat a classmate to death with a bat.

• Elizabeth Bush, age 13, (Paxil) was responsible for a school shooting in Pennsylvania

• Chris Shanahan, age 15 (Paxil) in Rigby, ID who out of the blue killed a woman.

• Jeff Franklin (Prozac and Ritalin), Huntsville, AL, killed his parents as they came home from work using a sledge hammer, hatchet, butcher knife and mechanic’s file, then attacked his younger brothers and sister.

• Neal Furrow (Prozac) in LA Jewish school shooting reported to have been court-ordered to be on Prozac along with several other medications.

• Kevin Rider, age 14, was withdrawing from Prozac when he died from a gunshot wound to his head. Initially it was ruled a suicide, but two years later, the investigation into his death was opened as a possible homicide. The prime suspect, also age 14, had been taking Zoloft and other SSRI antidepressants.

• Alex Kim, age 13, hung himself shortly after his Lexapro prescription had been doubled.

• Diane Routhier was prescribed Welbutrin for gallstone problems. Six days later, after suffering many adverse effects of the drug, she shot herself.

• Billy Willkomm, an accomplished wrestler and a University of Florida student, was prescribed Prozac at the age of 17. His family found him dead of suicide – hanging from a tall ladder at the family’s Gulf Shore Boulevard home in July 2002.

• Kara Jaye Anne Fuller-Otter, age 12, was on Paxil when she hung herself from a hook in her closet. Kara’s parents said “…. the damn doctor wouldn’t take her off it and I asked him to when we went in on the second visit. I told him I thought she was having some sort of reaction to Paxil…”)

• Gareth Christian, Vancouver, age 18, was on Paxil when he committed suicide in 2002, (Gareth’s father could not accept his son’s death and killed himself.)

• Julie Woodward, age 17, was on Zoloft when she hung herself in her family’s detached garage.

• Matthew Miller was 13 when he saw a psychiatrist because he was having difficulty at school. The psychiatrist gave him samples of Zoloft. Seven days later his mother found him dead, hanging by a belt from a laundry hook in his closet.

• Kurt Danysh, age 18, and on Prozac, killed his father with a shotgun. He is now behind prison bars, and writes letters, trying to warn the world that SSRI drugs can kill.

• Woody __, age 37, committed suicide while in his 5th week of taking Zoloft. Shortly before his death his physician suggested doubling the dose of the drug. He had seen his physician only for insomnia. He had never been depressed, nor did he have any history of any mental illness symptoms.

• A boy from Houston, age 10, shot and killed his father after his Prozac dosage was increased.

• Hammad Memon, age 15, shot and killed a fellow middle school student. He had been diagnosed with ADHD and depression and was taking Zoloft and “other drugs for the conditions.”

• Matti Saari, a 22-year-old culinary student, shot and killed 9 students and a teacher, and wounded another student, before killing himself. Saari was taking an SSRI and a benzodiazapine.

• Steven Kazmierczak, age 27, shot and killed five people and wounded 21 others before killing himself in a Northern Illinois University auditorium. According to his girlfriend, he had recently been taking Prozac, Xanax and Ambien. Toxicology results showed that he still had trace amounts of Xanax in his system.

• Finnish gunman Pekka-Eric Auvinen, age 18, had been taking antidepressants before he killed eight people and wounded a dozen more at Jokela High School – then he committed suicide.

• Asa Coon from Cleveland, age 14, shot and wounded four before taking his own life. Court records show Coon was on Trazodone.

• Jon Romano, age 16, on medication for depression, fired a shotgun at a teacher in his New York high school.

Missing from list… 3 of 4 known to have taken these same meds….

• What drugs was Jared Lee Loughner on, age 21…… killed 6 people and injuring 14 others in Tuscon, Az?

• What drugs was James Eagan Holmes on, age 24….. killed 12 people and injuring 59 others in Aurora Colorado?

• What drugs was Jacob Tyler Roberts on, age 22, killed 2 injured 1, Clackamas Or?

Those focusing on further firearms bans or magazine restrictions are clearly focusing on the wrong issue and asking the wrong questions, either as a deliberate attempt to hide these links, or out of complete and utter ignorance.

Don’t let them! Force our elected “representatives” and the media to cast a harsh spotlight on this issue. Don’t stop hounding them until they do.

About Dan Roberts
Dan Roberts is a grassroots supporter of gun rights that has chosen AmmoLand Shooting Sports News as the perfect outlet for his frank, ‘Jersey Attitude’ filled articles on Guns and Gun Owner Rights. As a resident of the oppressive state of New Jersey he is well placed to be able to discuss the abuses of government against our inalienable rights to keep and bear arms as he writes from deep behind NJ’s Anti-Gun iron curtain. Read more from Dan Roberts or email him at DRoberts@ammoland.com You can also find him on Facebook: https://www.facebook.com/dan.roberts.18
Learn more: http://www.naturalnews.com/050149_mass_shooting_guns_psych_drugs.html#ixzz3doTaRQOw