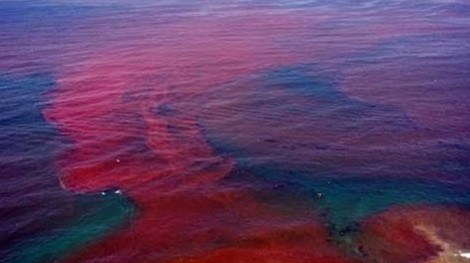 (FEE.ORG) potentially deadly threat is making its way across the Pacific ocean and could eventually force up to half of the nation’s West coast to temporarily close down as experts determine how to react.

No, we’re not talking about Russian submarines or Japanese warplanes — we’re referring to perhaps the largest toxic algae bloom ever recorded off the West coast, bringing toxin-laced waves toward a long stretch of America’s shoreline.

The toxic bloom has been labeled “unprecedented” by scientists, as it involved three different toxins that rarely show up together, let alone in the massive stretch of water the bloom covered.

“The fact that we’re seeing multiple toxins at the same time, we’re seeing high levels of domoic acid, and we’re seeing a coast-wide bloom — those are indications that this is unprecedented,” said Vera Trainer of the Seattle-based Northwest Fisheries Science Center.

Domoic acid, a naturally occurring toxin, was the most concerning threat of the group and has already forced commercial and recreational crab fisherman to cancel their seasons and wait for the toxic bloom to dissipate.

The recipe for such a rare, widespread occurrence and proliferation of the toxin-producing algae, according to scientists, is unseasonably warm weather, the large pool of unusually warm water known as “the blob” that formed in the northeastern Pacific last year, a rich supply of nutrients and the right currents to carry them.

This is the first time that nearly half of the West Coast has been forced to close due to a toxin-laced algae threat (H/T Red Flag News).

Scary stuff, if you ask us.