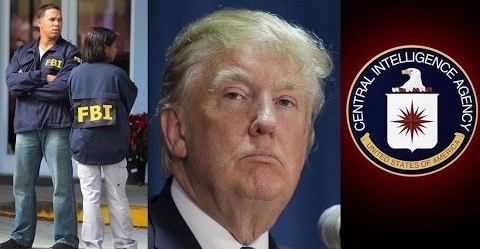 We are officially watching Donald Trump face off against the Central Intelligence Agency on the national stage in a “war of words” that could have grave implications.

“They are the ones that are going to be able to give him some wise counsel about what he needs to do and not be very spontaneous in his words and his actions,” Brennan said. “Spontaneity is not something that protects national security interests and so therefore when he speaks or when he reacts, just make sure he understands that the implications and impact on the United States could be profound.”

In response, Trump took to his Twitter account and blasted Brennan, claiming that he “couldn’t do much worse” than President Obama has already done in Syria and Ukraine, and that because of his comments, Brennan must be the leaker of “fake news.”

much worse – just look at Syria (red line), Crimea, Ukraine and the build-up of Russian nukes. Not good! Was this the leaker of Fake News?

These comments come after Trump criticized the Intelligence Community on Wednesday, for falling for an unverified report that claimed Russia had compromising information on Trump. “One last shot at me,” He wrote on Twitter. “Are we living in Nazi Germany?”

Intelligence agencies should never have allowed this fake news to "leak" into the public. One last shot at me.Are we living in Nazi Germany?

The question is, why is Trump going against the CIA in such an aggressive way?

Well, the mainstream media—especially the Washington Post—has stuck to the story that Russia meddled in the U.S. election by allegedly hacking the email accounts of DNC officials and then releasing their emails in order to sway Americans to vote for Trump.

We have all been waiting for evidence… and yet, in addition to a series of vague, anonymous reports, when the Intelligence Community did finally provide a report of its own, it blamed the network “RT” for allegedly influencing Americans to vote for Trump in 2016—by using programs it aired in 2014.

[RELATED: How The CIA vs. Donald Trump Is Just Getting Started]

Obama is also stirring up conflict by expanding the NSA’s power. Last week, he signed an executive order that would allow the NSA to share unfiltered information—which it collects illegally from innocent American citizens—with agencies such as the FBI, the DEA and the Department of Homeland Security,

Now, there is a lot of speculation online that Trump will be assassinated by the CIA. The reason people are suggesting this possibility is because the last president who went after the CIA as aggressively as Trump is now, was John F. Kennedy, who promised to shred the agency into a thousand pieces after firing then-CIA Director Allen Dulles.  After JFK was assassinated, Dulles was in put in charge of the investigation into JFK’s murder.

We don’t know what the CIA will do, but we do know what they have been caught red-handed many times—drug-trafficking, influencing the Vietnam war, influencing the Iraq War, overthrowing foreign governments, assassinating world leaders—and now many political experts are describing the CIA as a government agency that has “gone rogue,” because there is no way to hold it accountable, due to the fact that everything they do is in secret.

How do you think the fight between Donald Trump and the CIA will continue to unfold? Let us know in the comments!