The New TTP? Meet TISA, the ‘Secret Privatization Pact that Poses a Threat to Democracy’ 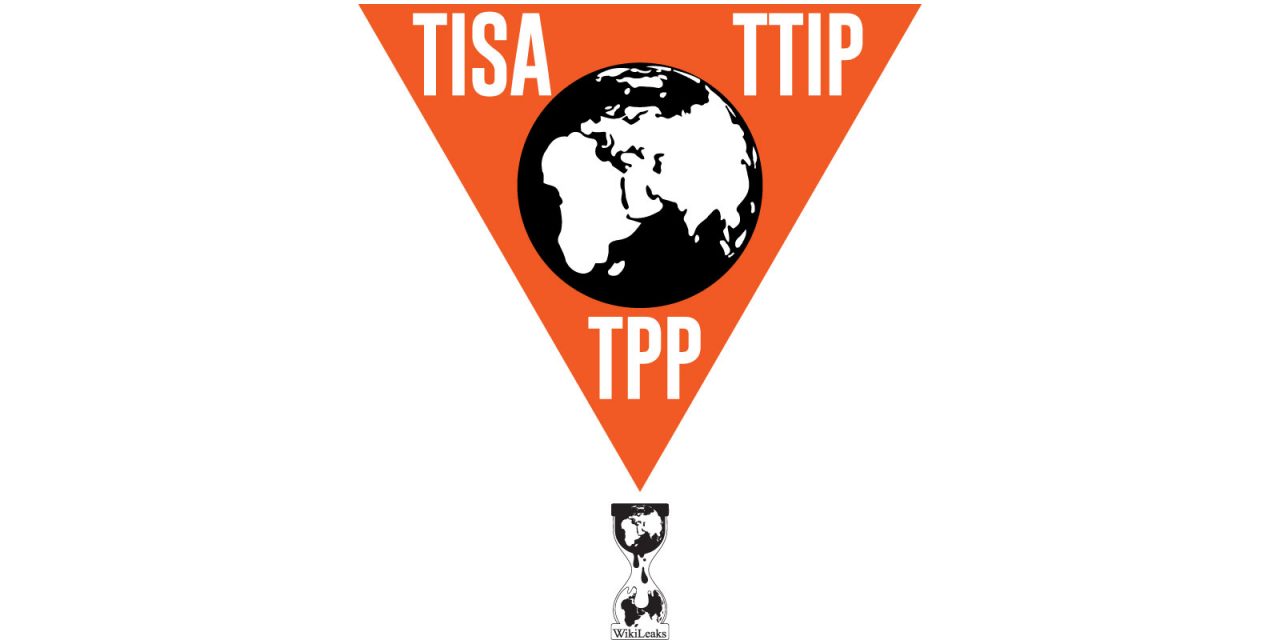 An international trade deal being negotiated in secret is a “turbo-charged privatization pact” that poses a threat to democratic sovereignty and “the very concept of public services”, campaigners have warned.

But this is not TTIP – the international agreement it appears campaigners in the European Union have managed to scupper over similar concerns – this is TISA, a deal backed by some of the world’s biggest corporations, such as Microsoft, Google, IBM, Walt Disney, Walmart, Citigroup and JP Morgan Chase.

Few people may have heard of the Trade In Services Agreement, but campaign group Global Justice Now warns in a new report: “Defeating TTIP may amount to a pyrrhic victory if we allow TISA to pass without challenge.”

Like the Transatlantic Trade and Investment Partnership, TISA is being negotiated in secret, even though it could have a major impact on countries which sign up.

While TTIP is only between the EU and US, those behind TISA have global ambitions as it involves most of the world’s major economies – with the notable exceptions of China and Russia – in a group they call the “Really Good Friends of Services”.

The Department for International Trade dismissed the idea that public services were at risk from TISA, adding that the UK was committed to securing an “ambitious” deal. But according to Global Justice Now’s report, the deal could “lock in privatisation of public services”; allow “casino capitalism” by undermining financial regulations designed to prevent a recurrence of the 2008 recession; threaten online privacy; damage efforts to fight climate change; and prevent developing countries from improving public services

Nick Dearden, director of group, said: “This deal is a threat to the very concept of public services. It is a turbo-charged privatisation pact, based on the idea that rather than serving the public interest, governments must step out of the way and allow corporations to ‘get on with it’.

“Of particular concern, we fear TISA will include clauses that will prevent governments taking public control of strategic services, and inhibit regulation of the very banks that created the financial crash.”

He suggested pro-Brexit voters should be concerned at the potential loss of sovereignty.

“Many people were persuaded to leave the EU on the grounds they would be ‘taking back control’ of our economic policy,” Mr Dearden said.

“But if we sign up to TISA, our ability to control our economy – to regulate, to protect public services, to fight climate change – is massively reduced. In effect, we would be handing large swathes of policy-making to big business. “

The report says the widespread opposition to TTIP, a deal between only the EU and US, had not yet been repeated over TISA.

“It is vital for elected representatives, campaigners and ordinary citizens to unite against this threat,” it adds.

“TISA threatens public services. From postal services to the NHS, TISA could lock in privatisation and ensure that big multinationals increasingly call the shots on areas like health, education and basic utilities.”

A so-called “ratchet” clause in the deal means that after a service– like trains or water or energy – is privatised, this is almost impossible to reverse even if it fails.

According to the report, a “standstill” clause also means “no new regulation can be passed that gives foreign companies worse treatment” than when TISA is passed.

“Taken together, the standstill and ratchet clauses could make it much harder for a future government to renationalise the railways, a move backed by a majority of the British public,” it says.

“Similarly, it could mean that the creeping privatisation of the NHS becomes more and more irreversible with greater involvement of companies from countries like the US. And forget taking control of the electricity system back from the big six energy firms.”

Migrant workers could be classified as “independent service suppliers”, the report says, meaning they would not be eligible for the minimum wage or be allowed to join a union.

People going to another country may find their visa is tied to their job, so if they were sacked, they would be deported.

“This sort of system of modern indentured labour is wide open to abuse by unscrupulous employers who may get away with illegal practices safe in the knowledge that they can threaten any employee with deportation if they complain,” the report says.

“This sort of system is used in countries like Saudi Arabia, the UAE and Qatar and has resulted in working conditions that have been described as being close to slavery.”

The global economic crash of 2008 was precipitated by the sale of complex financial products linked to unsafe “sub-prime” mortgages. The report says there is a danger the final TISA deal would “undermine efforts to regulate risky financial products” with a proposal that firms should be allowed to offer “any new financial service”.

“The danger is that TISA will deter governments from limiting the use of such ‘innovative’ financial products and leave us powerless to stop the next financial crisis,” it says.

TISA could also potentially prevent governments from favouring renewable energy over fossil fuels – despite the need to reduce greenhouse gas emissions and the health effects of air pollution.

Private firms would also be allowed to move online data from one country to another under one proposal being considered. While the original country’s privacy laws would have to be respected, the report said it was “not clear how this will be … enforced”.

While developed countries in Europe have established public services that would not be threatened unless a state’s government decided to open them up to private firms, the same is not true of many developing countries. If they signed up to the deal, it could effectively prevent them from setting up public institutions taken for granted in the West.

The TISA negotiations were held behind closed doors for about 18 months until they were publicly revealed by the global trade union group Public Services International (PSI). Information about some of the proposals has been also disclosed through Wikileaks and similar sites.

Daniel Bertossa, PSI’s director of policy, said: “Anybody who’s interested in maintaining democratic control of national institutions should be very concerned about the Trade in Services Agreement that is being negotiated in secret.

“It will remove large sections of national sovereignty and the ability of any government, including the UK Government, to regulate important service sectors [on issues] such as energy, such as transport, such as privacy. The Trade in Services Agreement is part of a radical project to limit governments’ sovereign right to regulate and freeze it almost in permanence in the interests of foreign corporations.”

According to the European Commission, TISA is about “facilitating trade in services”.

“The EU is the world’s largest exporter of services with tens of millions of jobs throughout Europe in the services sector. Opening up markets for services will mean more growth and jobs,” its website says.

The Independent has contacted “Team TISA”, a group of mainly American companies in favour of the deal, asking for a comment.

On its website, it says: “Services are the fastest growing sector of the global economy and account for two thirds of global output, one third of global employment and nearly 20 per cent of global trade.

“The TISA provides an opportunity to expand services trade among over 50 countries, covering nearly 70 per cent of global trade in services.

“The potential expansion TISA provides will benefit not only global growth, but also US domestic growth.

“As the world’s largest services exporter, with over $1.3 trillion (about £1 trillion) in annual cross-border and foreign-affiliate sales, the US will benefit tremendously from elimination of services barriers.”

A Department for International Trade spokesperson said: “Public services are under no threat whatsoever from this deal or any other trade agreement. The UK remains committed to an ambitious Trade in Services Agreement.”