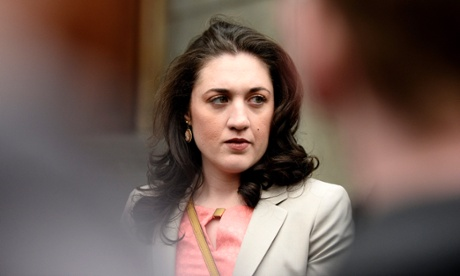 An Occupy Wall Street activist charged with assaulting a police officer is a “promoter of non-violence” who wandered into a tussle with law enforcement while celebrating St Patrick’s Day, her lawyers plan to argue in court this week.Jury selection began on Monday morning in the trial of Cecily McMillan, who denies assaulting Officer Grantley Bovell as he arrested protesters from the anti-capitalist movement in New York’s Zuccotti Park on 17 March 2012.

“An innocent woman is being accused of something that could send her to prison for seven years,” McMillan’s attorney, Martin Stolar, told reporters outside the state supreme courtroom in lower Manhattan. “She was leaving the park pursuant to the police department’s orders when she was brutally assaulted by a police officer and subsequently accused of assaulting that police officer.” McMillan told a small group of supporters: “Thank you for being here today.”

Prosecutors are expected to argue that McMillan, 25, intentionally elbowed Bovell in the face as he carried out his official duties. They are expected to cite testimony from police officers and a long-range video clip of the incident.

McMillan insists that she did not know Bovell was a police officer and swung her arm at him only after he grabbed one of her breasts from behind. Stolar told the Guardian in an interview that the court would hear that she was renowned among fellow campaigners in the Occupy movement and in other activist circles as “a profound pusher of non-violent political action”.

“Her reputation is somebody who promotes non-violence as the preferred method of achieving political ends,” said Stolar. “She is not somebody who has a reputation for being a violent person. So there will be character witnesses that will testify that her character is such.”

McMillan’s defence team also intends to stress that although she had been active in the occupation of Zuccotti Park, she was enjoying a “day off” on 17 March by celebrating St Patrick’s Day with a friend visiting from outside the city. She had stopped at the park only for about 20 minutes to collect another friend when the clash with Bovell took place, they claim.

“She was out partying, she wasn’t out to get into a confrontation with the cops,” said Stolar. “And she was dressed in bright green: you don’t go out and go commit a crime wearing something that is obvious and makes you easily picked out.”

Jurors are expected to be shown photographs of McMillan taken three days after the incident showing a hand-shaped bruise on her right breast. Her lawyers argue that while other bruising – on her back, the back of her head, and backs of her legs – was caused when police pushed her to the ground after she struck Bovell, the bruise on her breast was inflicted before this.

“The explanation for her having a bruise on her front, as far as we are concerned, is that is where she was grabbed by the person who turns out to be a police officer,” said Stolar. “And her swinging around and her arm hitting the cop in the face was a reaction, a response to being grabbed on the breast.”

Stolar last month had a motion requesting access to Bovell’s NYPD personnel file rejected by Judge Ronald A Zweibel as irrelevant to McMillan’s trial. The NYPD’s response to Stolar’s motion confirmed that Bovell had been subject to inquiries by the force’s internal affairs bureau at least twice and had received a “command discipline” in 2010.

The Guardian last week disclosed that Bovell is being sued by another Occupy activist, Austin Guest, who alleges that the officer dragged him down the aisle of a bus while “intentionally banging his head on each seat” while removing him and dozens of other protesters from the demonstration, which marked six months of the Occupy movement.

Guest’s attorneys said in an updated complaint in federal court that as a result, the 33-year-old Harvard graduate “suffered physical, psychological and emotional injuries, mental anguish, suffering, humiliation, embarrassment, and other damages”.

Guest and eight other protesters, none of whom was charged with a crime, are suing Bovell, several of his colleagues, the NYPD and city authorities for allegedly violating their rights. They are seeking unspecified compensation, damages and legal fees. Lawyers for the NYPD said in a response motion that the officers denied all the allegations.