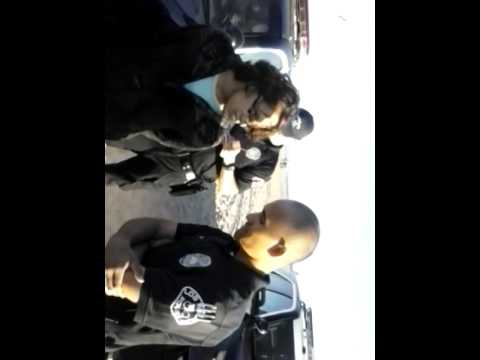 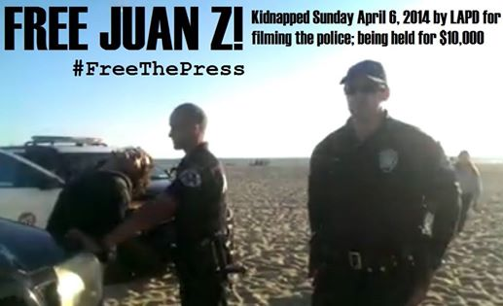 Yesterday in Venice, California, activist Juan Zuleta was arrested, along with two others, for knowing his rights and is being held on $10,000 bail. Juan’s alleged crime was filming the police, some of whom were undercover as they confronted a drum circle and several Wave of Action activists spreading the next-generation message of the Occupy movement: protesting corruption, rallying around solutions and taking part in alternative systems. We’re lucky to have this handheld video footage of Juan in handcuffs, complete with an unnecessary shove by one of LAPD’s slimiest, who were standing around slack-jawed and unable or unwilling to say why Juan is cuffed and under arrest.

Coverage by the mainstream media is, as you’d expect, deficient. According to Cassandra Rules, a political activist and friend of Juan Zuleta, ABC news was at the beach because they’d received a tip that “anarchists” would be there creating havoc in support of Wave of Action. Presumably they were disappointed because the story they produced was rich in subliminal suggestion but low on those meaty facts we usually call “truth.” It referenced past disturbances and times when residents called the police about noise, but makes no mention of anyone calling the police yesterday or anything untoward actually happening to draw the cops. The ABC story says that after sundown the drumming must stop, yet shows the LAPD lads loitering on the sand in full daylight. Apparently the scene was so hectic that only one of the arrested’s offenses could be identified (throwing a bottle at the police) and even at that, we are not told whether the bottle hit its target.

If you have a dollar or two to spare, you can donate to Juan’s release at www.gofundme.com/851ayo, where at the time of this writing, $100 has already rolled in. If a thousand of us can spare $10 each, he’ll be home tonight.

Juan’s been a trooper for peace and justice for many years, and this travesty should not stand. Wave of Action runs from April 4 til July 4. You can learn more about it waveofaction.org, and learn of developments in Juan’s story by following Cassandra Rules on Twitter: twitter.com/CassandraRules/