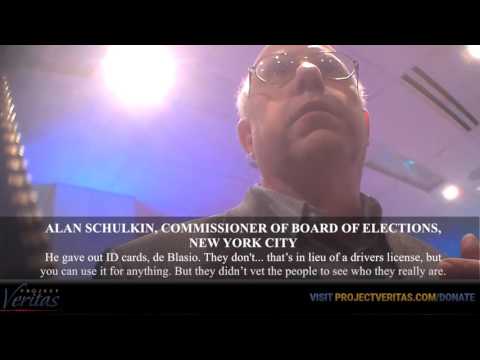 In a Project Veritas video release James O’Keefe exposes election fraud yet again this time however it’s at a larger scale. We first told you about election fraud during the primaries earlier this year in which we documented all the historic fraud that took place in each state against Senator Bernie Sanders.

In the video NYC Democratic Commissioner of the Board of Elections Alan Schulkin can be heard admitting to large scale voting fraud in which he says that “certain neighborhoods bus people around from poll site to poll site.” When asked which neighborhoods Schulkin was referring to, Schulkin didn’t elaborate. But the unnamed female Veritas journalist didn’t back down, mentioning black and Hispanic neighborhoods. Then Schulkin agreed and said, “Yeah . . . and Chinese, too.”

The conversation took place at a United Federation of Teachers holiday party, Schulkin was caught on hidden camera when he made the shocking comments to a unknown Project Veritas female reporter.

That’s not the only comment that he made about voting fraud, Schulkin elaborated further stating the different types of election fraud that he believed was going on in New York.

Schulkin, additionally expressed that he believed that there should be a ID law where they ask for your ID to vote. He also said how New York mayor, De-Blasio gave out ID cards without vetting the people that they were who they said they were. Adding that “anyone could go in there and say I am John Smith, and get an ID card it’s absurd there is a lot of fraud not just voting fraud.”

“Yeah, they should ask for your ID. I think there is a lot of voter fraud,”

New York doesn’t have any voting ID laws which allows for abuse within the electoral process but there are all sorts of different ways to rig the polls besides having people vote multiple times.

“It’s the law, the law says you can’t ask for anything which they really should be able to do.”

When Schulkin was asked why Democrats took part in this type of shenanigans, he responded.

“For votes. More votes for themselves. They’re all running for office.”

Schulkin ended saying that he wasn’t crazy about everything the Democrats do and added that he finds himself everyday the older he gets becoming more conservative.

O’Keefe has previously exposed other cases of election fraud like the video of Clinton campaign staff in Nevada saying “Whatever you can get away with just do it.”

Allegedly said by Christina Gupana, a Hillary campaign worker and Las Vegas attorney. It worries me and it should worry you that a attorney of law would have that type of mindset.

Schulkin better avoid gyms bar bells and public parks before he ends up shot with two bullets in the back of his head and his death ruled a “suicide” to cover up what he knows.

When asked by a New York Post reporter if he regretted his comments he said “I stand by my remarks though I should have said ‘potential fraud’ instead of ‘fraud.’”