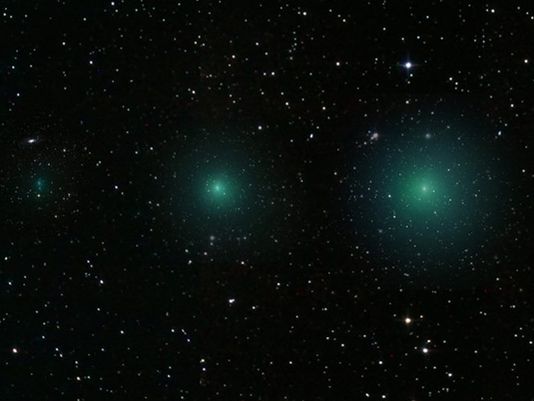 An emerald-green comet will brush the Earth Monday, followed one day later by a kissing cousin that will swerve closer to the planet than any other comet in nearly 250 years.

The first and bigger of the two comets will be visible Monday to the naked eye in the southern hemisphere, as long as city lights are far away. Stargazers in the United States will probably need only binoculars to see the bigger comet in late March. Scientists, however, are bringing out the big guns. The Hubble Space Telescope, the powerful ground-based Gemini telescopes and others will be trained on the celestial visitors, which will provide an extraordinary close-up of objects usually glimpsed only at a distance.

“This is one for the record books,” says Michael Kelley of the University of Maryland, who’s never heard of two comets approaching close to Earth a day apart. “It’s a fantastic opportunity for professionals to learn more about comets, and if you have a chance to try to find them … it’s a fantastic chance to see part of history as it happens.”

The first member of the pair, known as comet 252P/LINEAR, is a bright green color from the carbon gas it’s puffing out, says the University of Maryland’s Matthew Knight. 252P will slide past Earth at a distance of roughly 3 million miles. That’s well beyond the moon but near enough to put 252P in the top 10 of closest-approaching comets.

252P wasn’t expected to get terribly bright, but it has been “surpassing all expectations,” says amateur comet-hunter Michael Mattiazzo of Australia. It may even be visible to the unaided eye in southern hemisphere suburbs where light pollution is low.

Astronomers discovered the trailing member of the pair, P/2016 BA14, a few months ago. It was shrugged off as yet another asteroid, or space rock. Then astronomers peering through a telescope saw it had a tail – and was therefore a comet. That means BA14 and its larger companion “are among the closest comets to pass by Earth in recorded history,” says Knight, who took the first snapshot revealing BA14 is a comet. The only comet known to have skimmed past us at a smaller distance was Lexell’s Comet in 1770.

Scientists aren’t yet sure of the nature of the relationship between 252P and its hanger-on. Perhaps BA14 broke off 252P decades ago. Both comets could be pieces from an even bigger comet, or they could be unrelated. If the upcoming studies show they’re family, they’ll provide an almost unprecedented scientific bonanza.

“Comets split relatively often,” Knight says, “but we rarely get a chance to study them soon after it happens, and when we do usually only the bigger fragment survives. …We have two fragments in this case.”

“A lot of things in the sky remain immobile,” says Bob King, an amateur astronomer and Sky & Telescope blogger. But anyone looking at 252P through a telescope when it’s very near will see it move, he says. “You feel a little, ‘Whoa, the solar system is closer than I thought.’… It really is a thrill.”