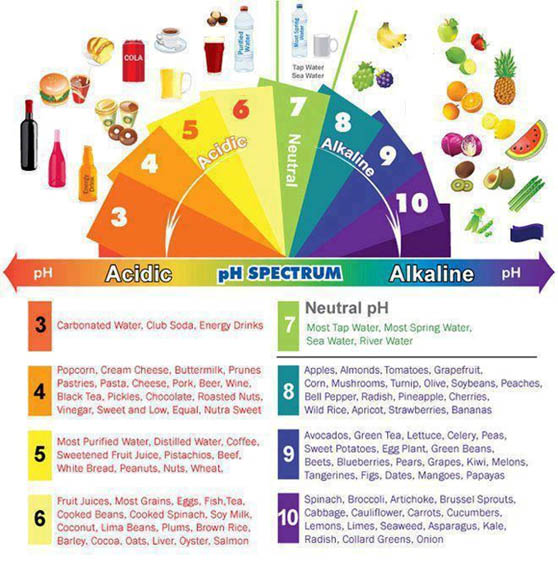 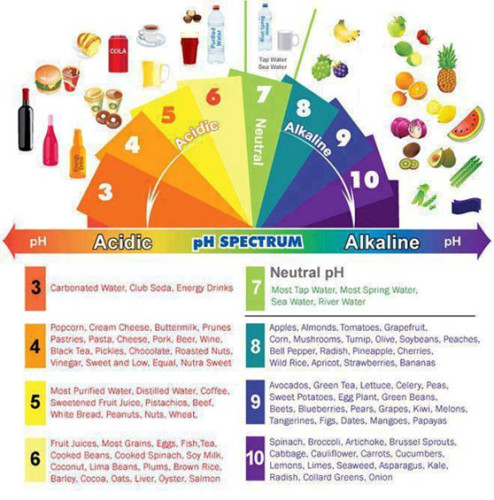 Remember back in high school chemistry when you learned about acid/alkaline balance, also referred to as the body’s pH (“potential Hydrogen” or “powers of Hydrogen”)? Our pH is measured on a scale from 0 to 14, with 7.35 being neutral (normal), below 7.35 is acidic (with 0 being the most acidic) and above 7.35 is alkaline (with 14 being the most alkaline.

Over 70% of our bodies are water. When cells create energy via aerobic respiration, they burn oxygen and glucose. In simple terms, in order for the body to create energy it requires massive amounts of hydrogen. As a matter of fact, each day your body uses about ½ pound of pure hydrogen. Even our DNA is held together by hydrogen bonds and since the pH of bases is higher, they have a greater potential to absorb hydrogen, which results in more oxygen delivered to the cells.

Our blood must always maintain a pH of approximately 7.35 so that it can continue to transport oxygen. Thus, God has made our bodies resilient with the ability to self-correct in the event of an imbalanced pH level through a mechanism called the buffer system. In chemistry, a buffer is a substance which neutralizes acids, thus keeping the pH of a solution relatively constant despite the addition of considerable amounts of acids or bases. However, the American diet (United States) being full of junk foods, fast foods, processed foods, and sodas, puts the body through “the ringer” in order to maintain the proper pH in the blood. Although our bodies typically maintain alkaline reserves which are utilized to buffer acids in these situations, it is safe to say that many of us have depleted our reserves.

When our buffering system reaches overload and we are depleted of reserves, the excess acids are dumped into the tissues. As more and more acid is accumulated, our tissues begin to deteriorate. The acid wastes oxidize (“rust”) the veins and arteries and begin to destroy cell walls and organs. Having an acidic pH is like driving your car with the “check engine” light on. It’s a sign that something is wrong with the engine and if we don’t get it fixed, then eventually the car will break down.

According to Keiichi Morishita in his book, Hidden Truth of Cancer, as the blood becomes acidic, the body deposits acidic substances into cells to remove them from the blood. This allows the blood to remain slightly alkaline. However, it causes the cells to become acidic and toxic. Over time, many of these cells increase in acidity and some die. However, some of these acidified cells adapt to the new environment. In other words, instead of dying (as normal cells do in an acidic environment) some cells survive by becoming abnormal cells. These abnormal cells are called “malignant” cells, and they do not correspond with brain function or the DNA memory code. Therefore, malignant cells grow indefinitely and without order. This is cancer.

Putting too much acid in your body is like putting poison in your fish tank. Several years ago, we purchased a fish tank and a couple of goldfish for our children. After killing both goldfish, we quickly learned that the key factor in keeping fish alive is the condition of the water. If their water isn’t balanced, then they die quickly. We also learned that you can kill a fish rapidly if you feed it the wrong foods! Now, compare this to the condition of our internal “fish tank.” Many of us are filling our fish tanks with chemicals, toxins, and the wrong foods which lower our pH balance, and an acidic pH results in oxygen deprivation at the cellular level.

So, what other things can we do to keep our tissue pH in the proper range? The easiest thing is to eat mostly alkaline foods. The general rule of thumb is to eat 20% acid foods and 80% alkaline foods. Fresh fruit juice also supplies your body with a plethora of alkaline substances. You can take supplements, such as potassium, cesium, magnesium, calcium, and rubidium, which are all highly alkaline.