Operation Give Back: Completed 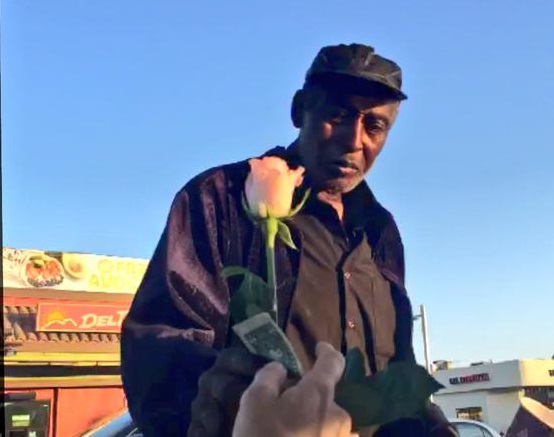 2015’s operation was centered in the Los Angeles area, after Give Back’s annual return was made known, many of you responded and Luke began the quests you sent him on:

The cat was happy.

After that, Mark Hurych wanted a thank-you for promoting our work.

. @mark57g you got it thank you so much for everything brother really appreciate it

We’ll double that with thank you Mark, and anyone else who has helped us along the way. Dan Rice then requested a full tank of gas and this was delivered!

Task 3 lined up perfectly as well:

Roses were up next!

@Lukewearechange for operation give back: get a bouquet of roses and hand each rose out to a stranger to brighten their day!!

That task took a bit longer, but was well worth it.

Luke topped that off by buying a lovely woman, or MakeupProSmile dinner at a fine Indian restaurant:

Just met @MakeupProSmile who asked me to buy her dinner, which was at an amazing Indian place #OperationGiveBack pic.twitter.com/CpwYQ07Y80

Edward @MoneyManOne asked me to put gas in his tank so I did lol #OperationGiveBack pic.twitter.com/UfdLS9WTpq

Our friends over at JoyCamp also participated in Operation Give Back, and turned out to be the final entry:

@Lukewearechange People keep calling us shills. It makes us sad. We need a motivational pep talk. Can you come over and give us one pls?

Just left @TheJoyCamp gave them a lil pep talk and I think that may be it for #OperationGiveback :0 pic.twitter.com/fK3GffvxhV

Also, if Luke happened to miss your request:

And oh yeah I'm sorry I haven't responded to everyone. don't get mad at me b/c this is the busiest day of the year for me.

So THAT was Operation Give Back, thank you for everyone who helped and participated; also a thank-you for Luke for making this happen.

Below are past Operation Give Backs – Enjoy!