President Trump Says ‘We’re Not Going Into Syria’ Even Though U.S. Troops Are Already There 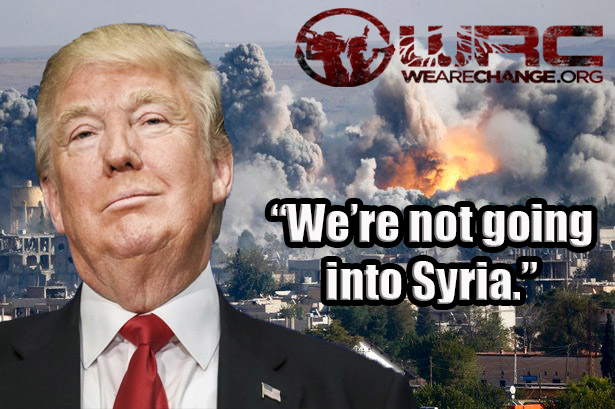 President Donald Trump announced on television last night that, “we’re not going into Syria.” As great of news as this is, perhaps we should be looking at the reality behind these claims in depth, rather than simply accepting them as verbatim fact.

For instance, multiple sources reported on March 9th that the U.S. dispatched around 400 ground forces into Syria. What is most troubling about this alert is that the Pentagon has also stopped disclosing troop numbers in the Middle East. In essence, then, there could be scores more than the 400 ground forces in Syria already. Another source, the Army Times, claims that 2,500 troops were sent out to a staging base in Kuwait (which is within striking distance of Syria) on the same day.

We already know that there are U.S. ground forces in Syria, which makes Trump’s comment, “we’re not going into Syria,” questionable because we are already in Syria. Perhaps our president needs to clarify his comments, because the American people are watching world events unfold with anxiety right now. This latest claim by Trump is even more confusing than anything.

President Trump has already stated multiple times that he would never disclose military plans for foreign enemies. Recently on April 6, Secretary of State Tillerson admitted that, “steps are underway,” to remove Assad from power, ostensibly asserting that a plan has already been laid out and put into action for regime change.

After the U.S. airstrikes on Syria, Russia responded viciously on the United Nations Security Council floor, asserting that the U.S. airstrikes violated Geneva Convention international law and also later made moves for a potential military response. Since Russia has made it clear that they are not going to back down from the situation in Syria, maybe President Trump will now stick to his word and stay out of the conflict.

To be clear, “not going into Syria,” includes violations of ground space and airspace. If there is one more troop sent into Syria, or one more airstrike, we can confirm that President Trump’s statement is a lie. The first step for President Trump to make in order to keep his word, he should then pull the 400 troops that were reportedly dispatched to Syria and all other ground and air forces included.