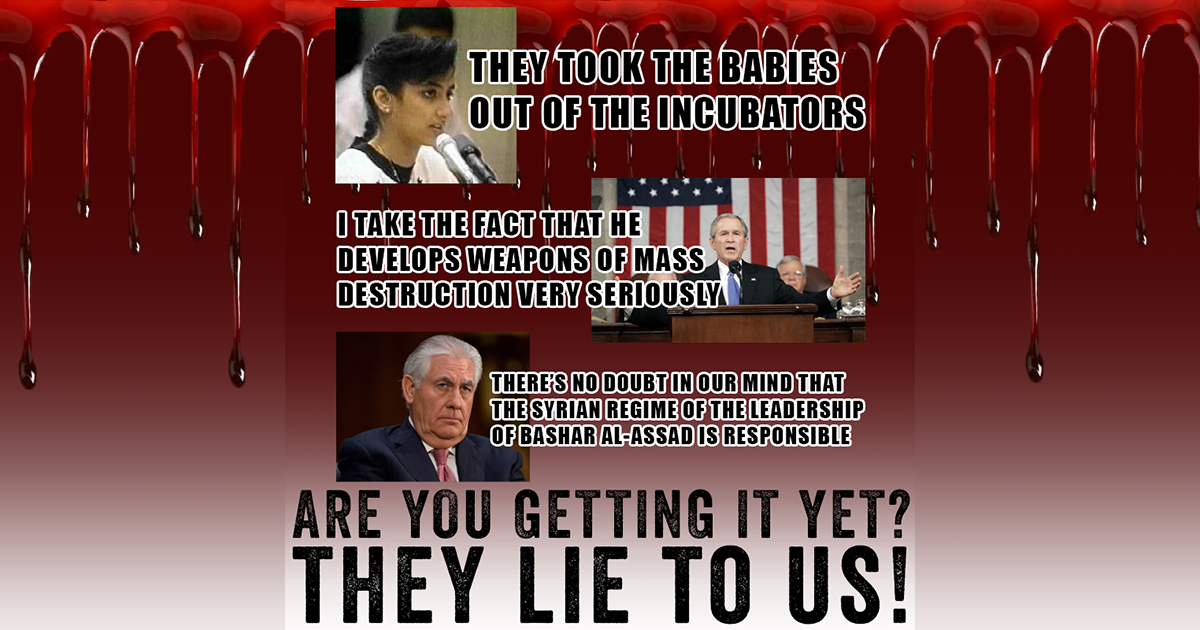 For more on this fake testimony, see the following story:

Allowing President Bush himself to provide the proof that he lied, in this first video he says that, “I take the fact that [Saddam Hussein] develops weapons of mass destruction very seriously.”

Bush would later use this claim as a reason to invade Iraq, but he then raised some ears when he later admitted that, “the main reason we went into Iraq at the time was we thought [Saddam Hussein] had weapons of mass destruction, turns out he didn’t.”

We now know that Bush and Tony Blair signed a pact in blood to invade Iraq 1 year prior to the invasion according to Hillary Clinton’s emails.

It turns out that lie that Saddam had weapons of mass destruction was based off of several forged plagiarized academic papers by the UK equivalent of the White House, Downing St.

1. Tillerson says there is “No Doubt” Assad Dropped Chemical Weapons

Perhaps this lie is being reported a little early, but we can safely confirm that Secretary of State Rex W. Tillerson was lying when he said there is, “no doubt,” that Assad dropped chemical weapons on his own people. President Trump was also quick to blame Assad for an action that is currently being investigated, but several countries in the UN Security Council weren’t so sure that there was definitive proof and the U.S. has not provided substantial evidence to back their claim.

On the UN Security Council floor, ambassador Nikki Haley admitted that “We don’t yet know everything about yesterday’s attack,” but she stated that it, “bears all the hallmarks of the Assad regime’s use of chemical weapons.” In other words, she is speculating that it could be Assad, but that it also might not be Assad.

There is also evidence that the chemical weapons could have been used by ISIS, which is a separate group from the Syrian state. However, according to the intelligence granted to a UN ambassador of the U.S. government, the U.S. really isn’t sure that Assad dropped the chemical weapons. This shows that, contrary to what Tillerson claims, there are doubts that Assad was responsible for that heinous attack.