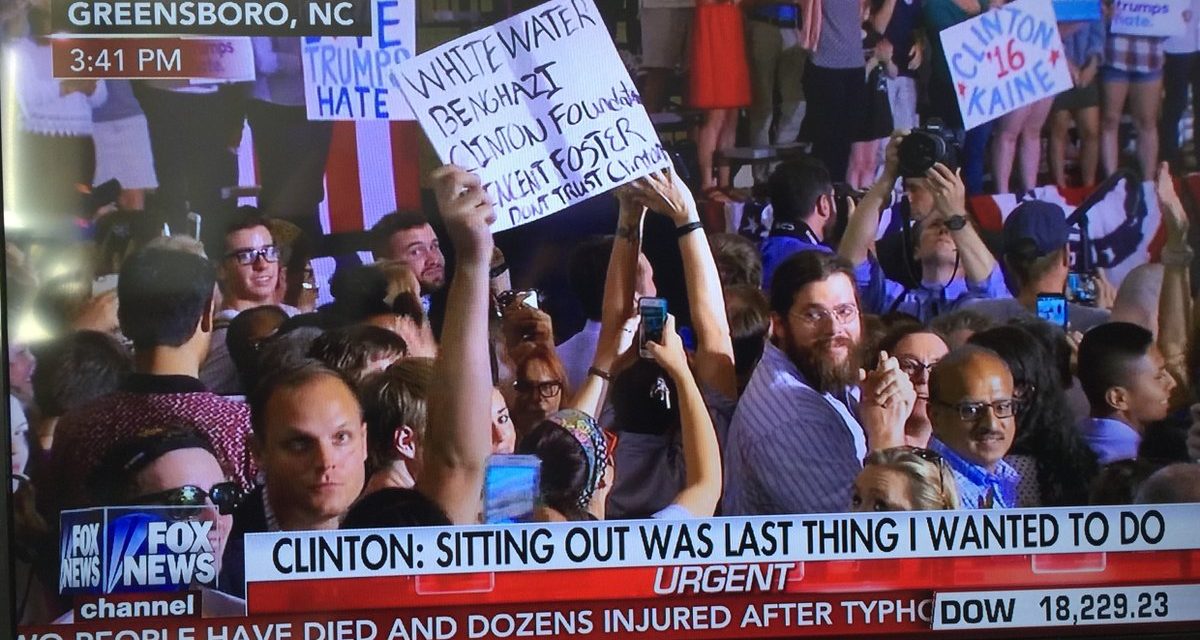 Someone actually brought some energy to a Hillary Clinton rally, but once again it wasn’t one of her supporters.

In Greensboro, North Carolina, on Thursday, during Clinton’s first rally since she collapsed at the memorial for victims of the World Trade Center attack, a protester interrupted her speech by shouting “F*CK HILLARY!”

While the media enjoyed playing up all the interruptions from protesters at Trump rallies — which seem to have simmered down — they do not seem to be as enthusiastic to cover the same occurrences at Clinton rallies.

During Clinton’s at the end of August, a heckler hilariously shouted “Pepe!” as she asserted that the alt-right is racist. Clinton has since went to war with the green frog meme, devoting an entire page on her website to calling poor Pepe a Nazi.

For those unfamiliar, Pepe, an anthropomorphic frog, is a popular meme that originated, along with many other popular memes – from Doge to Scumbag Steve – on 4chan message boards. It is widely used across party lines by those who enjoy internet culture. While it has become a sort of unofficial mascot for those on the right, they are not the only ones who use it, just like the memes featuring Harambe.

Just a couple weeks before that, an animal rights protester was tackled and arrested by the Secret Service as she attempted to rush the stage at a Clinton rally in Iowa.

Another protester runs at Hillary Clinton! But the MSM will never report on it! #CrookedHillary pic.twitter.com/wHUgqnMoSf

Kelsey Atkinson, 26, from Direct Action Everywhere, had hopped over the security gate and nearly made it to the stage when she was swarmed by agents. Several agents also surrounded Clinton on the stage, presumably to comfort her and prevent another embarrassing “short circuit” moment.

Atkinson was carrying signs that stated “Get Big Ag Out of Politics.” DxE activists say Clinton, who recently held a$50,000 per ticket fundraiser with Costco founder Jeff Brotman, has supported billions of dollars in subsidies to farm conglomerates, including Costco suppliers such as Hormel. According to their press release, a recent DxE investigation and rescue at a Costco supplier showed evidence that humane welfare reforms — which Costco has touted — are insufficient.

Clinton’s reaction to animal rights protesters at another rally the week before Iowa, who were also from Direct Action Anywhere, sparked an internet frenzy questioning her mental health.

If Clinton has to be calmed down over a protester how will she handle a serious problem? She's not mentally fit.https://t.co/fmunp3j5Vi

Clinton appeared spooked and almost mentally shut down as protesters unveiled harmless signs stating, “until every animal is free!”

It remains unclear if Thursday’s protester was harmed in any way or arrested.