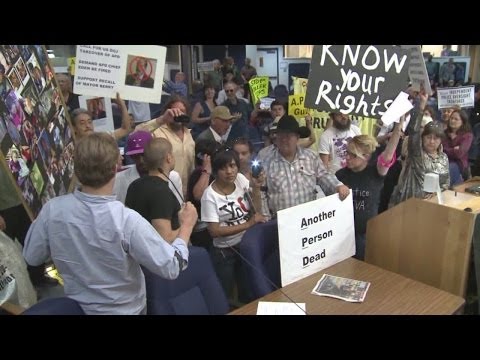 There is something very, very wrong with the Albuquerque, New Mexico police department, and the citizens have just about had enough.

Before I get into the heart of this story, I need to provide you with a little background. The Albuquerque Police Department (APD) is well known for its outrageous and inappropriate use of violence.

So much so that it has been under investigation by the Department of Justice, which wrote a letter to the Mayor of Albuquerque on April 10, 2014 condemning the police force. Here’s an excerpt from the letter:

Based on our investigation, we have reasonable cause to believe that APD engages in a pattern or practice of use of excessive force, including deadly force, in violation of the Fourth Amendment and Section 14141. Our investigation included a comprehensive review of APD’s operations and the City’s oversight systems. We have determined that structural and systemic deficiencies—including insufficient oversight, inadequate training, and ineffective policies— contribute to the use of unreasonable force. At the conclusion of this letter, we outline the remedial measures that we believe are necessary to ensure that force is used in accordance with the Constitution. In some instances, these recommendations build on measures and initiatives that are already underway within the department.

Just prior to the release of the letter, APD officers shot in the back and killed a homeless man named James M. Boyd, who was camping in the Albuquerque foothills. More recently (and after the DOJ’s letter was sent), 50-year-old Air Force veteran Armand Martin was killed outside of his home by a SWAT team in a standoff with police. It seems the APD is incapable of solving any sort of dispute without a citizen ending up dead.

It makes you wonder what is up with law enforcement in New Mexico in general. If you recall, earlier this year I highlighted a horrific incident in Deming, New Mexico in my post: How a Routine Traffic Stop in New Mexico Turned into a Nightmare of Torture for David Eckert.

So back to Albuquerque. The people are rightfully very upset, which led to a city council meeting being taken over on May 5th by protesters. This display of civil disobedience even led to an attempt to serve Police Chief Gorden Eden with an citizen’s arrest warrant. As a result of the protest, the city council moved to prevent protests at their latest meeting, which may lead to free speech related lawsuits. You have to watch the following video: