After Reading This You May Never Want To Use WiFi Again 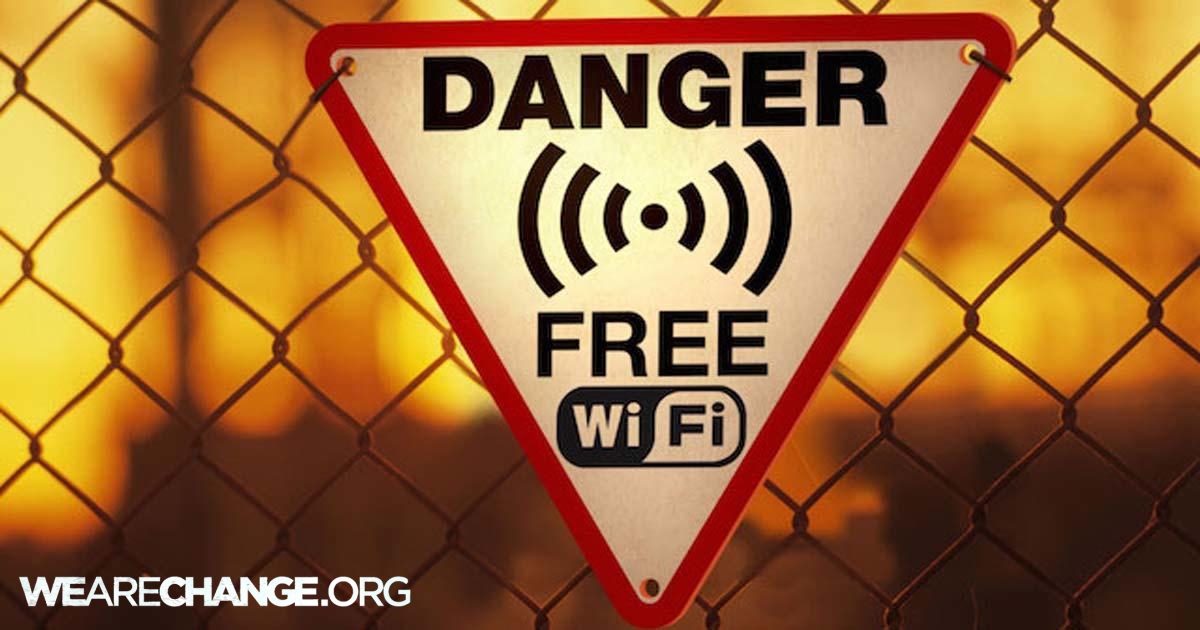 (NaturalHealth365) The 5G revolution is rushing toward us and it will bring a whole new era of harm from ultra-high microwave frequency radiation.  And those who raise their voices against the danger to our health and our human rights to safety have been the subject of harassment, intimidation and attempts to silence them.

On July 14, the FCC voted to unleash 5G in the United States, approving sweeping Spectrum Frontiers rules to make spectrum bands above 24 GHz available for 5G.  Even though serious health risks are associated with the proliferation of cell phone technology, the attitude of the FCC seems to be ‘full speed ahead and damn the torpedoes.’

The July 14 vote was preceded, a month earlier, by a June 20th announcement by FCC chairman Tom Wheeler, in which he enthusiastically heralded the coming rollout of 5g applications and networks as a “game-changer” and a “national priority” that will generate “tens of billions of dollars.”

Warning for humanity: The FCC automatically approves the use of untested frequencies

The 5G network will use higher frequency bands than previously thought possible – which are untested frequencies of 24 to 100 GHz or more.  Wheeler said that implementing the new frequencies would necessitate new antennas – intended to aim and amplify the signals – new infrastructure and a massive deployment of towers throughout the United States.

The FCC is moving quickly to adapt 5G technology. Wheeler said that Verizon and ATT will start 5g trials in 2017, with the first commercial deployments scheduled for 2020. Specifically rejecting the notion of 5G being only for urban use, Wheeler noted that all areas, including rural communities, will be saturated.

In other words: No part of the country will be safe from ultra-high frequency signals.

With obvious relish, Wheeler spoke of “turning innovators loose” to develop and adapt 5G and related networks. And, as for those ‘annoying regulators’ – who could presumably stand between us and harm from electromagnetic radiation – Wheeler rejects the idea that these cautious people should be allowed to define our future.

Gestapo tactics are being used to silence criticism of 5G technology

At the July 14th press conference, Bloomberg News reporter Todd Shields had his press credentials confiscated by members of the FCC security force.  His offense?  He was in the act of speaking with safety advocates concerned about radiation, who wanted to show him a tee shirt symbolizing their concerns.

Who is behaving “responsibly” here – the FCC chair who is shamelessly pushing 5G, or the activists who are trying to hold him accountable?  This video (below) says it all – judge for yourself:

Remember – things that the government once tested and considered “safe” include such toxic horrors as thalilomide, smoking, asbestos, lead paint, and Agent Orange.  Can we really trust these so-called government ‘health’ agencies?

The public is at risk: Corporate giants care more about revenue and ignore the dangers

As the annual financial reports of such corporations as Verizon and T-Mobile reveal, the companies acknowledge they are subject to litigation relating to the alleged health effects of wireless phones and radio frequency transmitters. The companies warn that this could result in significant damages; they also admit that wireless technology and adverse health effects do exist – including the threat of cancer.

Already, Nokia is a defendant in 19 separate lawsuits filed in Washington, D.C. alleging that radio emissions from cell phones caused their brain tumors. The lawsuits allege an industry-wide conspiracy to manipulate the science and testing around emissions guidelines – and the world will be watching as this drama unfolds.

The following pair of websites offer clear and practical ways to stop the spread of 5G technology.

After emailing, make sure to send a copy to your elected officials, and also email a copy to the FCC.

You can also demand a systematic review of 5G by the EPA, and insist that the review be accompanied by the development of proper safety standards.  In addition, you can subscribe for more solutions at TakeBackYourPower.net to receive updates on liability actions.

Former congressional candidate and safety advocate Kevin Mottus warns that schoolchildren are already developing cancer and neurological symptoms as a result of exposure to wireless routers. “We are microwaving our population,” Mottus declares.  It’s time to take action.

Can Cell Phones Cause Cancer? The Answer is Yes