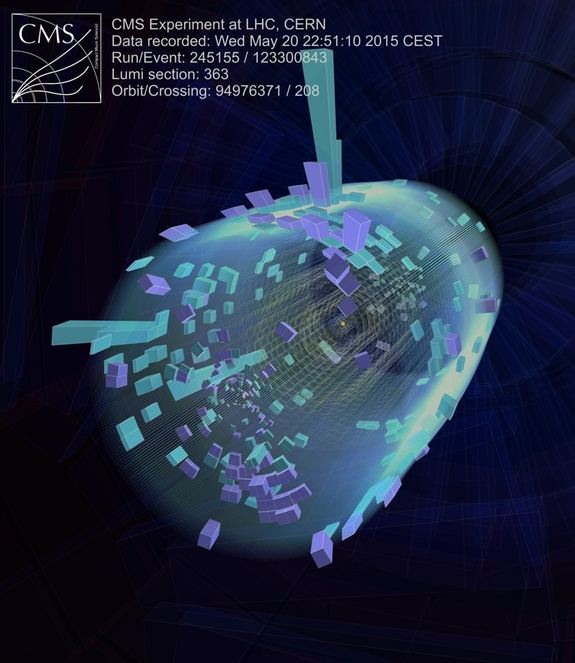 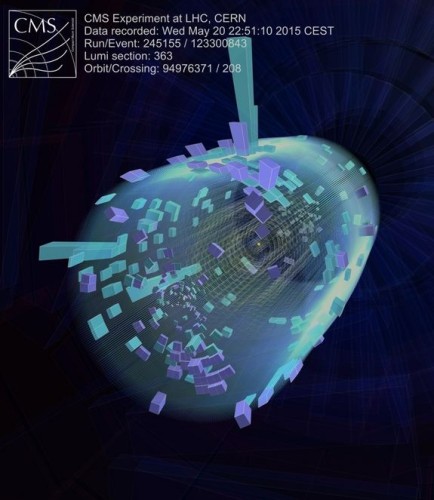 The world’s largest atom smasher is really cranking now: Protons zipped around the giant underground ring at near light-speed and collided head on, releasing record-breaking energies.

The beauty of the fallout from these powerful particle smash-ups can be seen in images released yesterday (May 21) by the European Organization for Nuclear Research (CERN), which oversees the 17-mile-long (27 kilometers) Large Hadron Collider (LHC). The underground particle collider in Switzerland awoke in April after a two-year snooze for repairs and upgrades.

This week during a test run, the protons sped into each other with energies of 13 tera-electronvolts (TeV), or double the collider’s previous power.

“It doesn’t sound like very much, but if you have a mosquito buzzing around, the amount of energy it takes to keep that mosquito floating is about the energy of one of these collisions — except that you have this energy compressed down into the size that’s a million times smaller than the width of a human hair,” Greg Rakness, run coordinator for one of the experiments called CMS at the collider, told Live Science.

Physicists used these test collisions to set up systems called collimators that would protect the LHC’s magnets and detectors from stray particles.

When 100 billion to 1,000 billion protons are sped up in a ring, some of them are inevitably going to be “off spec,” having slightly different energies than the other particles, Rakness said. “If they don’t have the right energy, they float outside [the main beam, and] they go around in a little bit bigger circle. And when they do this, the problem is these protons can hit equipment” inside the LHC, Raknesssaid.

To capture these “out of whack” protons, Rakness said, physicists rely on the collimators, which are essentially blocks of metal. During the test run, the teams figured out where to place the collimators to capture the stray protons and protect the machine’s equipment. The test run was successful, he added.

Also, the nearly 9,600 magnets that move the protons around in a circle are working properly, he said.

The LHC is scheduled to begin runs at 13 TeV in early June. At that time, the various experiments, such as ALICE, ATLAS and CMS, can begin producing data. The LHC’s claim to fame right now is the Higgs boson, a particle thought to explain how other particles get their mass and which was discovered in 2012 inside the underground ring.

With higher energies, the collisions could produce even heavier exotic particles that have not yet been discovered. And physicists are excited about what’s in store, hoping that the particle crashes will reveal unknowns about the universe, from extra dimensions to twins of the Higgs boson, the scientists have told Live Science.

The new run of the LHC could also give physicists evidence of supersymmetry, the idea that all the known subatomic particles have superpartners that are yet to be discovered.