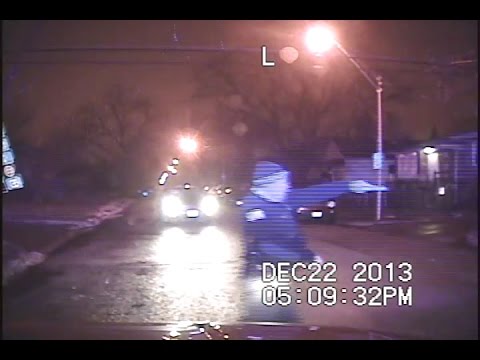 (thejournal.ie)A video of a Chicago police officer appearing to open fire into a carload of unarmed teenagers troubled a former judge so greatly that he handed the video over to the media.
“I’ve seen lots of gruesome, grisly crimes,” retired Cook County Judge Andrew Berman told Jonah Newman of the Chicago Reporter. Berman, who was a judge in a criminal case against one of the teens, added, “But this is disturbing on a whole different level.”
The December 2013 video, embedded below, shows Chicago police officer Marco Proano allegedly shooting more than a dozen rounds at the moving vehicle full of six minors, according to civil complaint filed against the city of Chicago and several officers. The Reporter identified them as black.
None of them had a weapon or acted aggressively toward the officers, according to the complaint.

Proano hit one passenger in the shoulder and another in both hips, according to the complaint.Prior to the incident, two other Chicago officers had stopped the car near 95th and LaSalle Street in Chicago’s notoriously violent South Side. Moments later, one of the passengers took off running.
Proano, who had just arrived at the scene, exited his patrol car and approached the car with his gun drawn sideways, according to the civil complaint filed on behalf of the teens. When the car started to move in reverse, Proano allegedly began shooting.
The video is the crux of a federal lawsuit filed against Chicago and the three police officers on the teenagers’ behalf. Pending approval from the City Council, it could end with a $360,000 payout for the victims.
While Proano didn’t immediately respond to a request for comment from the Reporter, in a federal filing he admitted he was the officer who opened fire on the vehicle in question.
We reached out to a lawyer for Proano and will update this post if we hear back.
Proano has been assigned to desk duty but remains otherwise undisciplined and on the force, the Reporter reported. In the past four years, he has been cleared of six complaints against him, one of which included excessive force, according to the Reporter.
“He [Proano] shouldn’t be allowed to be out there with a gun,” Berman told the Reporter

He has shown callous disregard for human life … You don’t start firing into a car full of unarmed people. You just don’t do that.”