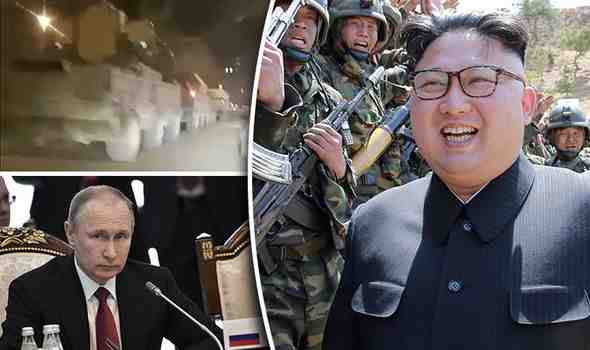 Russia has reportedly moved several military vehicles towards Vladivostok, which is within miles of striking distance of North Korea according to a video uploaded to social media.

According to reports, a military convoy of eight surface-to-air missiles, apart of Russia’s Air Defence, were on the move.The S400 anti-aircraft missiles were moved to Vladivostok, where Russia has a major navy base.

The dramatic move was unconfirmed by the Russian government, but was spotted by dozens of residents in the border city and posted on social media.This comes as North Korea warned that they are prepared for all-out war with the US, while China pleads for the two countries to back down from escalation warning there will be no victor if there is war.

On Friday, China’s Foreign Minister Wang Yi warned that “conflict could break out at any moment”.

“We call on all parties to refrain from provoking and threatening each other and not to let the situation get to an irreversible and unmanageable stage,” Wang said.

[RELATED: China To U.S. And North Korea If War Breaks: ‘There Will Be No Winner’]

Air China, has canceled flights from Beijing to Pyongyang, amid fears of an escalation in the region.

While the Japanese have begun planning efforts to evacuate their 60,000 citizens from South Korea.

Since the footage has emerged, fears have risen that North Korea could become the powder keg that sparks conflict involving the US, China, and Russia.

Another video showed Chinese military moving anti-aircraft missiles although the footage has been found to have been uploaded in March according to Epochtimes.