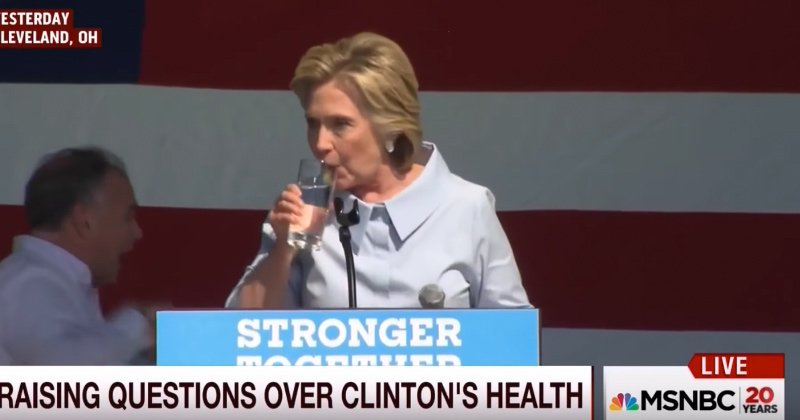 In perhaps the grossest campaign moment since Ted Cruz ate a booger off of his lip during a debate — Hillary Clinton spit up a yellowish substance into her water glass on live television while rallying in Cleveland on Monday.

During the rally, the apparently ailing Clinton could not pull herself out of a massive coughing fit and was seen disgustingly spitting up either phlegm, bile, pieces of cough drops, alien mucus, or some other mystery substance into her drinking water glass.

Clinton insisted that the cough was allergy related, but Twitter users quickly debunked this story by pointing out that the pollen count in the area was low.

Desperately, her campaign (as well as pundits who may as well be considered part of her team) has been painting anyone who questions Clinton’s health as some kind of crazy conspiracy theorists. Undeterred, author and independent journalist Mike Cernovich has launched several hashtags relating to the candidate’s health which have soared to the number one trending spot on Twitter.

On Monday, #HackingHillary rose to the top nationwide.

MSM reporters taking extra precautions to make sure they don't catch whatever #HackingHillary has ??#NeverHillary pic.twitter.com/PXcGkMKxhN

Last week, the Huffington Post terminated a contributor after deleting two articles he had published questioning the health of Clinton — just days after Dr. Drew was canned from HLN for the same reason.

“When she hit her head, she had to wear these prism glasses when she came out,” Drew had stated on air.

“That is brain damage, and it’s affecting her balance. Now clearly, it hasn’t affected her cognition, but tell us a little more about that. That’s profound. And then number two, when they screened her for heart disease, again, they did an old-fashioned screen. It just seems like she’s getting care from somebody that she met in Arkansas when she was a kid, and you’ve got to wonder. You’ve got to wonder,” he continued.

Drew has refused to retract his statements.

“I have created so many jobs in the sort of conspiracy-theory machine factory,” Clinton said to reporters on her new campaign plane. “Because honestly, they never quit.”

Unfortunately for Clinton, she can’t blame this disgusting hack on Russia.

Though she did try to blame it on Trump in a cheesy joke.