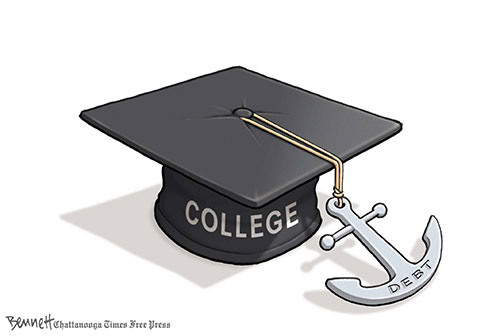 “Much of higher education is a fraud, and much of the reason higher education is such a huge fraud is the structure of the student loan scam. It’s a three step process. First, students take out loans for educations, not knowing the educations are bogus. Next, the students spend years in bogus schools, getting “educated”. Finally, the students leave the schools… only once they’re many thousands of dollars in debt do they know how they’ve been scammed, and they’re in no position to do anything about it.

Meanwhile, the schools, and the people running those schools, both for-profit and state, rake in a fortune in student loan money.

In a rare, rare, break, the Federal government is shutting down a bogus for-profit school: Corinthian, and all the fake schools that were surreptitiously operated by Corinthian, but by a different name (any legitimate businesses feel the need to advertise and operate under multiple names while selling the same product?).

So the scam has been interrupted: the students are finding out they’re getting indebted for a bogus education sooner than usual. The students are revolting:

This has been a LONG time coming. Some day, the immense frauds going on at state schools, especially community colleges, will also be common knowledge, and we’ll see revolts there as well. Unfortunately, I suspect the government won’t be quite so forthcoming when it comes time to shut down government schools:

Corinthian is being dismantled and its students given debt relief on their private loans ­ the institution is under federal and state investigations and is the target of multiple lawsuits alleging predatory lending practices. But Hornes and the “Corinthian 15” are demanding relief for their federal student loans, too.

So, the private loans are voided, and that’s a start. But why not the Federal loans? The reason those Federal loans were approved was because the bogus school was granted (bogus) accreditation. That’s not the students’ fault—the government should take responsibility for letting a completely bogus and ineffectual “regulatory” system like accreditation be the gatekeeper for the student loan scam.

The students feel, quite rightfully, if the bogus education means the private loans should be dissolved, that the Federal loans should also be so dissolved.

When he asked how he was supposed to take a final for a class with three instructors, he says he was told not to worry, that he’d be given an A anyway.

I feel bad for the kid being cheated like this in a for profit schools, but realize many community colleges work the same say, with empirical evidence that at least 1/3 of the community college coursework is “you don’t even have to show up to get an A”. Is the Federal Government paying attention?

Natasha finished her two-year paralegal program in 2012 and after having no luck finding a job in her field in southern California moved back to Missouri, where she is working at a local grocery store. She has some $50,000 in debt.

“My degree is worth nothing,” she says. “Other colleges laugh.”

When I was at a community college, many of my graduating students came to let me know that they, too, were getting laughed at for their degree. Best they could hope for was to have me help them transfer a few individual courses (i.e., the ones I taught, personally; it’s no fun convincing a registrar at a university that knows your school is bogus, to accept coursework, I promise you).

It isn’t just the tuition/loan money that I wish could be returned to the students, I wish the years of their lives that were stolen this way could also be given back.

“Nathan completed the associate’s degree program in 2012, and got his bachelor’s degree from Everest in 2014. He’s still working at Smashburger, now with about $68,000 in student loans to pay off. It’s hard to push forward with a music career when he’s pulling double shifts.

“I did not get the education that I was promised, I did not receive any knowledge that I could use in my day-to-day life, to get a career,” he says. “

Coursework at bogus schools is usually worthless, because no legitimate school will accept it…students can’t transfer out. Students get trapped at the for-profits…but the degrees aren’t worth anything, either.

The DOE stepped in to supervise the sale of 85 Corinthian campuses to the Educational Credit Management Corporation (ECMC), a private nonprofit that the education department uses to ensure student debtors pay their loans back ­ using what have been called “dubious” and “aggressive” collection tactics at times.”