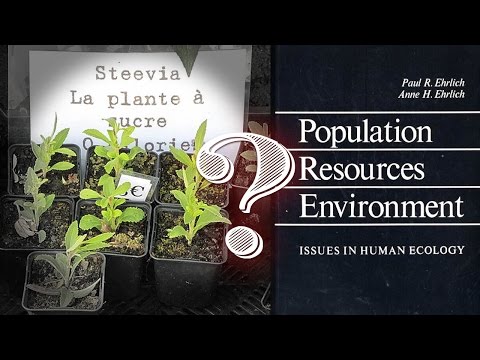 Maybe it’s not so sweet now… If you’ve thought stevia, the natural alternative to sugar and artificial sweetners with aspartame, et al., is too good to be true, there may be a catch. Check out this textbook written in 1970 by Paul and Anne Ehrlich, the precursor to the textbook Ecoscience they wrote with Obama Science Czar John P. Holdren seven years later. The book advocates all manner of horrors to depopulate what they consider an overpopulated world, including everything from adding sterilants to the water and food to producing a sterilizing virus that requires a vaccine antidote one could apply for… it’s a nightmare.

As such, it was pretty shocking to find a passage where the authors excitedly discuss using stevia rebaudiana — the same sweet leaf hailed everywhere today as a wonderful, healthy sugar alternative — as an anti-fertility agent. What’s more, it had apparently been used traditionally by indigenous Indian populations in Paraguay for a long time, and rats in studies had shown a large drop in fertility after being administered stevia…