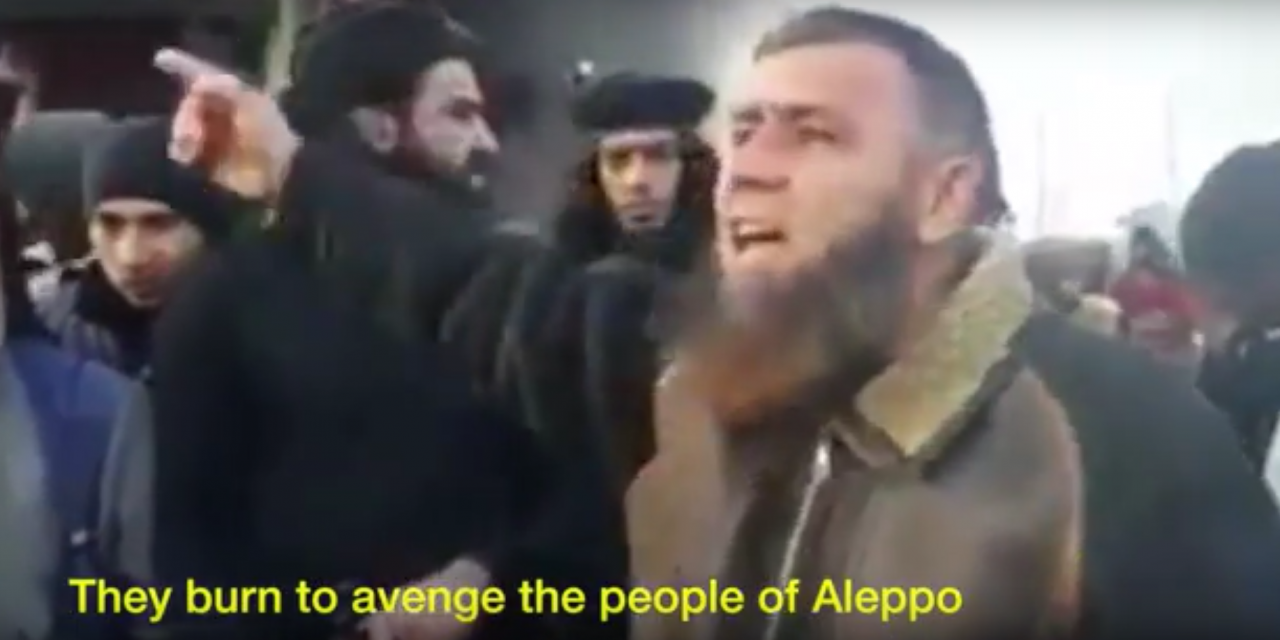 Mimi Al-Laham, known as Partisan Girl has reported that a video shows Syrian Sunni rebels promising to bomb buses evacuating Shi’ite civilians in 2015 prior to the two bus bombing terrorist attacks in Syria.

The video is extremely graphic and we have before outlined our policy for not showing deceased victims but in this case showing the devastation is warranted to show what the Syrian rebels are capable of.

In December 2016, the rebels bombed a bus evacuating the besieged city of Aleppo and promised to bomb civilians buses evacuating more civilians from the area.

“The buses meant to evacuate the Shi’ite heathens how we burned them for the sake of God, and we will burn every convoy trying to evacuate them,” a rebel soldier is heard saying in Arabic.

He added, “You want to evacuate the Shi’ites, do you? Pigs. God willing, they will only leave as corpses.”

This Saturday another evacuation bus was bombed in Idlib with the mainstream media peddling the narrative that the Syrian government was responsible by implying the suspected Vehicle Borne Improvised Explosive Device (VBIED) came from the Government side and that the town was Government held. Despite Syrian Girl’s video showing a man explain the latter, that rebels lured children to the area with bags of chips shortly before the explosion in a deplorable act of evil.

“There was a car that was distributing potato chips so then the kids started to run after it then it exploded,” a Syrian man said.

Another woman collaborated the man’s account of the events stating they scattered chips and “tried to gather as much children around the vehicle as once.”

In same propaganda article, BBC insinuates Govt culpability by directly implying suspect VBIED came from Govt side, which it did not. pic.twitter.com/UnCCmwRKB7

The two videos below explain that the mainstream media is completely wrong when they say that the town was Government held as the two factions have been at war. It’s the same story over and over as it’s been for quite some time in Syria, the Sunni v.s. the Shi’ites. It’s a civil war that involves other nation states funding them both creating further conflict with this proxy war.

BBC also noted that, “It would not be in the rebels interest..” to bomb their own civilians, as Syricide tweeted Funny how that only applies to the rebels but that logic didn’t apply two weeks ago during the Syrian chemical weapons gas attack in the same area of Idlib.

"It would not be in the rebels interest.." Funny how this logic never applies when chemical weapons are involved.

MSM is your enemy. pic.twitter.com/VFK4keaWdz

In 2015, during a separate event, Syrian children were dressed up as Isis hostages and put into a death cage in an anti-Assad protest. So, if Syrian rebels comprised of Al-Nusra and ISIS would do this to children what is stopping them from gassing their own civilians two weeks ago? The answer? Nothing is going to stop them. What is taking place in Syria is horrible, but it’s important to always stay vigilant and not be taken awash by propaganda to become emotionally manipulated by pictures and to seek factual information.

More importantly, the question of whether or not western journalist are being paid to decimate CIA Mockingbird 2.0 propaganda to the public must be answered or if it’s just lazy journalism.

As we have said before, Syria is very complicated. It’s not all black and white and anyone seeking to claim so should be seriously scrutinized.